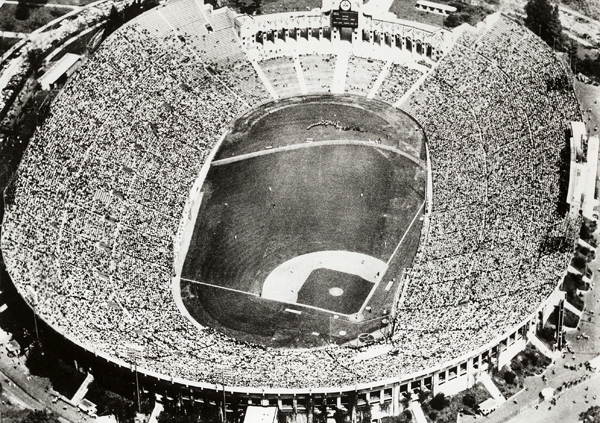 Highlights of the Dodgers’ days in L.A. Memorial Coliseum.

Highlights of the Dodgers’ days in L.A. Memorial Coliseum.With a seating capacity of over 90,000, the Los Angeles Memorial Coliseum was the largest ballpark ever to regularly host major league games.[fn]Based on seating capacities listed in Philip J. Lowry’s Green Cathedrals (Addison-Wesley Publishing Co., Inc., 1992). [/fn] It was also one of the strangest. Games at the Coliseum could contain 250-foot home runs to left, 440-foot flyouts to right, and fielders staggering to pick up the ball in the park’s combination of single-decked seats, bright sunlight, and white-shirted fans (some of them movie and television stars). “It was weird, weird, weird playing in the Coliseum,” said Dodgers infielder Randy Jackson, summing up the feelings of many players.[fn]Danny Peary, editor, We Played the Game: 65 Players Remember Baseball’s Greatest Era 1947–1964 (Hyperion, 1994), 391. [/fn] But in the four seasons the Dodgers called the Coliseum home (1958-61), the stands were often packed, and the games were seldom dull. 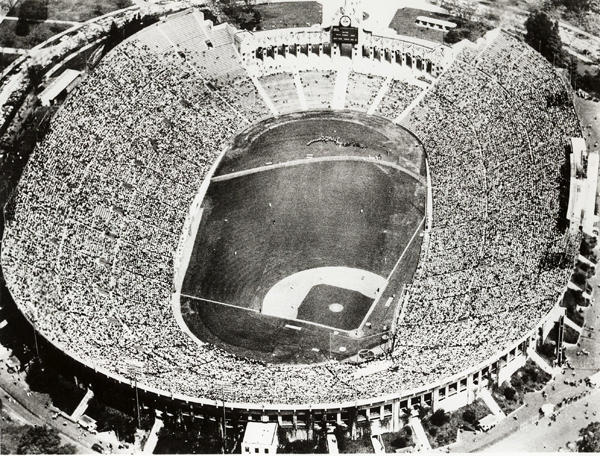 Consider the first regular-season game ever played at the Coliseum, on April 18, 1958. In front of 78,672 fans—at the time, a major league record crowd for a single game—the Dodgers took a 6–3 lead into the eighth inning, when 41-year-old Hank Sauer of the Giants became the first player to homer over the park’s 40-foot-high screen in left field. In the ninth, the first three Giants batters doubled (Jim Davenport), tripled (Willie Kirkland), and singled (Willie Mays), plus the Dodgers committed an error … but the Giants scored just one run because Davenport had failed to touch third base on Kirkland’s triple. The Dodgers hung on for a 6–5 win—not that everyone saw it clearly. “In the far reaches of the vast arena…” wrote Al Wolf in the Los Angeles Times, “the game resembled a pantomime. You couldn’t follow the ball, but the actions of the players told you what was happening. Nobody complained.”[fn]Al Wolf, “Players Complain but Fans Happy,” Los Angeles Times, 19 April 1958, A1. [/fn]

Or how about the last regular-season contest at the Coliseum, on September 20, 1961, played before only 12,068? Facing a Chicago Cubs lineup that included three future Hall of Famers (Richie Ashburn, Ernie Banks, and Billy Williams), Sandy Koufax struck out 15 batters in a 13-inning complete game before the Dodgers pulled out a 3–2 victory. According to statistics compiled by Alan Roth, Koufax threw a staggering 205 pitches in the game—allowing no hits after the eighth inning.[fn]Sandy Koufax with Ed Linn, Koufax (The Viking Press, 1966), 158. [/fn]

When the Dodgers moved west from Brooklyn following the 1957 season, it took them several months to decide on a temporary home while a new stadium in Chavez Ravine was being constructed. As late as January 1958, the Dodgers expected to play in Pasadena’s Rose Bowl, but when talks with Pasadena officials broke down, the club turned to the Coliseum, home of the NFL Los Angeles Rams and the collegiate USC and UCLA football teams.[fn]Neil Sullivan, The Dodgers Move West (Oxford University Press, 1987), 139–40. [/fn] The oval-shaped Coliseum was predictably difficult to configure for baseball, producing very short dimensions in left field (250 feet down the line, 320 to left-center) and distant fences in center (425 feet) and right-center fields (440).[fn]Lowry, 169. [/fn] The Dodgers erected the screen atop the left-field wall to help reduce the number of home runs, but many baseball people feared that Babe Ruth’s single-season home run record was in jeopardy.[fn]Norm Nevard, “Joke or Jonah? That 250-Foot Los Angeles Fence,” Baseball Digest, April 1958, 27. [/fn]

Such fears proved unfounded. The park did produce some crazy moments during the L.A. Dodgers’ inaugural season—such as a three-homer game on April 24 from the Cubs’ Lee Walls, who had hit only six four-baggers during the entire 1957 season. But while the Coliseum yielded 193 home runs during the 1958 campaign, most in the majors, that total was actually lower than the MLB-high 219 four-baggers that were hit in Cincinnati’s Crosley Field in 1957.[fn]Official Baseball Guide and Record Book 1959 (The Sporting News, 1959), 100. [/fn] And in the four seasons that the Dodgers played in the Coliseum, no Dodger player hit more than 14 home runs at home in a single season. 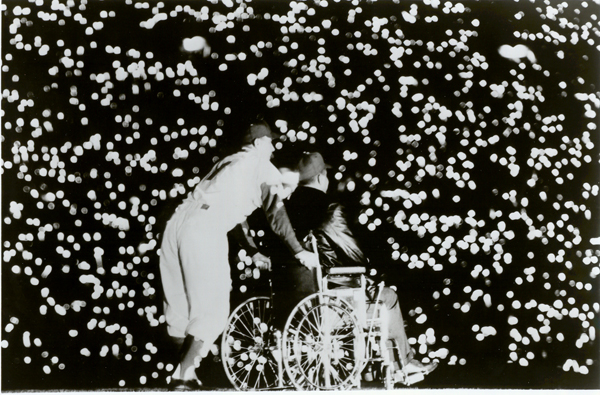 That is not to say that the Coliseum was beloved by players—especially pitchers. San Francisco Giants pitcher Johnny Antonelli called the left-field wall “the biggest farce I ever heard of,”[fn]Rube Samuelson, “250-Ft. Foul Line Sparks Hot Debate,” The Sporting News, 29 January 1958, 5. [/fn] and Dodger pitcher Don Drysdale commented, “It’s nothing but a sideshow. Who feels like playing baseball in this place?”[fn]Don Drysdale with Bob Verdi, Once a Bum, Always a Dodger (St. Martin’s Press, 1990), 71. [/fn] Outfielders, meanwhile, often complained about being unable to see batted balls. “Those rows of seats go so high, it’s awful hard to see anything but high flies,” said Willie Mays. “Line drives, they are murder.”[fn]Wolf, A5. [/fn]

For Dodgers players, the Coliseum could be heaven—or hell. Lefty-swinging Wally Moon, who joined the club prior to the 1959 season, reconfigured his swing to hit high flies (“Moon Shots”) over the left-field screen,[fn]Jerry Holtzman, “Home Runs by Moon-Light,” Baseball Digest, July 1961, 23–29. [/fn] hitting 37 home runs in the Coliseum from 1959–61, compared to only 12 on the road. Another lefty swinger, future Hall of Famer Duke Snider, struggled with the Coliseum’s deep right field dimensions in 1958, hitting only six home runs at home all season. But Snider rebounded after the Dodgers shortened the right-field fence in 1959,[fn]Lowry, 168. [/fn] and actually hit more home runs in the Coliseum (32) than on the road (21) 1959–61.

Among Dodgers pitchers, no one was hampered by the Coliseum more than Sandy Koufax—despite some great individual games there. From 1958 through 1961 Koufax was 28–20 with a 3.57 ERA and 33 home runs allowed in Dodger road games; in the Coliseum, he was 17–23, 4.33 with 56 home runs allowed. Koufax did not fully blossom as a superstar pitcher until 1962, when he won the first of five straight ERA titles in the Dodgers’ first season in Dodger Stadium.

The Dodgers themselves prospered when they moved from the Coliseum to Dodger Stadium in 1962, increasing their season attendance by more than 900,000 the first year.[fn]“Los Angeles Dodgers Attendance Data,” http://www.baseball-almanac.com. [/fn] But the team’s four seasons in the Coliseum had included an All-Star game (1959), the club’s first World Series championship on the West Coast (1959), and numerous memorable games, many featuring record-breaking attendance. What follows are a few highlights.

May 7, 1959. 93,103 fans—at the time, a record crowd for an organized baseball game in the United States—pack the Coliseum for Roy Campanella Night, a Dodgers-Yankees exhibition game held to benefit the former Brooklyn catcher who had been permanently disabled in an auto accident. An estimated 15,000 fans are turned away from the sellout.[fn]“Record 93,103 Hail Campanella at L.A.” The Sporting News, 20 May 1959, 5. [/fn]

August 3, 1959. In the first All-Star Game played west of St. Louis, the American League All-Stars defeat the National League, 5–3, before 55,105 fans. The game is the second of two All-Star games played that year; Don Drysdale, who had started the first All-Star Game in Pittsburgh on July 7, becomes the first and only pitcher to start two All-Star Games in the same year.[fn]David Vincent, Lyle Spatz and David Smith, The Midsummer Classic (University of Nebraska Press, 2001), 170–73. [/fn]

August 31, 1959. Before a paid crowd of 60,194—82,974 including charity and non-paid admissions—Sandy Koufax sets a modern National League single-game strikeout record and ties Bob Feller’s 1938 modern major league mark (since 1900; both records later broken) by fanning 18 San Francisco Giants in a 5–2 Dodger victory. Koufax records strikeouts on 15 of the last 17 outs and strikes out the side in the ninth on 10 pitches.[fn]“K-Man Koufax Joins L.A. Comeback Kids,” The Sporting News, 9 September 1959, 2. [/fn]

October 4–6, 1959. Three record crowds over 90,000—including an all-time World Series record 92,706 in Game Five—watch the Dodgers defeat the Chicago White Sox in Games Three and Four of the World Series, before losing Game Five, 1–0. The Dodgers go on to wrap up the Series in Game Six in Chicago, with the World Series record six-game attendance of 420,784.[fn]Steve Gietschier, The Complete Baseball Record and Fact Book 2006 (Sporting News Books, 2006), 391. [/fn]

August 16, 1961. The Dodgers drop out of first place by losing twice to the Cincinnati Reds, 6–0 and 8–0, but the Wednesday night twin bill sets a National League record for attendance in a doubleheader (72,140).[fn]Ibid., p. 85; record verfied through 2010 using STATS LLC database [/fn] March 29, 2008. In an exhibition game celebrating the Dodgers’ 50th anniversary in Los Angeles, the Dodgers lose to the Red Sox, 7–4, before 115,300 at the Coliseum—setting a new world record for attendance at a baseball game. Because of renovations on the Coliseum’s running track and football field, the left-field wall is only 201 feet from home plate at the foul line, and the left-field screen is 60 feet high.[fn]Bill Shaikin, “Baseball from another dimension,” Los Angeles Times, March 30, 2008. [/fn]

DON ZMINDA has worked for STATS LLC since 1992, first as the company’s Director of Publications and more recently as Director of Research. A member of SABR since 1979, he is the author or editor of more than a dozen books about baseball, including the SABR publication “Go-Go to Glory: the 1959 Chicago White Sox”. A native of Chicago, he has lived in Los Angeles since 2000.