This article was written by Mark Stang

This article was published in Fall 2021 Baseball Research Journal

Photographic evidence has emerged that disproves the oft-cited narrative that the 1925 American Association was the first baseball league at any level to consistently number their players’ uniforms. This article will present the photographs along with a brief history of uniform number usage in baseball.

The practice of using jersey numbers, which was in use among dozens of prominent college football programs as early as 1914, had a slow evolution in baseball. In 1916, the Cleveland Indians temporarily added numbers to players’ left sleeves during the second half of the regular season. The following year, the Indians tried moving the numbers to the players’ right sleeves. A brief wire service blurb dated March 29, 1917, reported that the Boston Red Sox and the Brooklyn Dodgers played a spring training exhibition game in Memphis, Tennessee, where both teams sported numbers on their players’ sleeves. However, these experiments proved to be nothing more than a passing fad.

Sportswriter Tommy Rice, who covered the major leagues for The Brooklyn Daily Eagle, was an early advocate pushing the big league clubs to number their players. As early as the offseason of 1922–23, Rice’s almost constant lobbying succeeded in getting the eight National League club owners to take up the matter at their annual Winter meetings. Though ultimately little came of the discussion, Rice would continue to beat the drum, and other baseball writers — notably Stoney McLinn and later syndicated columnist Billy Evans of The Philadelphia Ledger1 — would consistently make the point in print that the fans deserved a better and more expedient way of identifying both the home and visiting players.

At least one other major league club thought the issue worth pursuing; the 1923 St. Louis Cardinals featured numbers on the players’ left sleeves. It would prove to be a one-year dalliance and nothing further was seen of uniform numbers at the major league level for another six seasons. The practice of numbering players in the major leagues would not be adopted permanently until the 1929 New York Yankees and Cleveland Indians. It would take until 1931 for all eight American League clubs to follow suit, and the National League wouldn’t catch up until the middle of the 1932 season.

This period of seeming indifference on the part of major league club owners prior to 1929 left the door wide open for others to step in. The result was that the minor league club owners pioneered uniform numbers, as they did many of the game’s most fan-friendly customs (including bat day and the “knothole gang”). Recent research has uncovered significant photographic proof of minor league clubs adding uniform numbers to player jerseys several years prior to 1929. For example, we know that the Atlanta Crackers of the Southern Association began numbering their players in 1926. A vintage wire photo of the Crackers’ Leo Durocher, his back turned towards the photographers’ camera, has been seen (but not yet acquired) by the author. What is unknown as of the writing of this article is whether the other seven Southern Association teams followed suit, or was this simply a case of Atlanta going it alone?

Sportswriters in The Sporting News — and other wire service reports of the day — generally credit the teams of the American Association (AA) with debuting player uniform numbers at the start of the 1925 season. In fact, the December 11, 1924, issue of the “Bible of Baseball” contained the following note: “At a special meeting of the American Association owners, held in Hartford, just before the magnates left, it was decided by unanimous vote that all players be numbered on the field during the coming season. The players will wear the numbers on the sleeves of their shirts, which will correspond to the numbers on the program. The numbers are to be six inches high so they will be easily discerned from the stands.” League president Thomas J. Hickey was quoted as saying, “The numbering system has become almost general with football teams and I see no reason why it should not help the baseball fan.”2

A photo of pitcher Curt Fullerton of the St. Paul Saints clearly shows the results of the league-wide edict in the American Association (see Figure 1). Fullerton originally began the 1925 season in Boston as a member of the Red Sox staff. His first four years in Boston had produced a combined 10–32 record and, when he gave up a total of 11 runs in his first 22-plus innings of work in 1925, the Red Sox shipped him to the Saints in early May, where he spent the remainder of the season. The wire photo of Fullerton shows him wearing the number two (2) on his left sleeve. The back of the photo is date-stamped May 25, 1925. But were the eight teams of the 1925 American Association really the first minor league clubs (at any level) to begin numbering their players?

The author has uncovered proof of at least two other minor league ball clubs far to the south of St. Paul adding uniform numbers to their players’ jerseys. The first was the Fort Smith (Arkansas) Twins of the Class C Western Association. Slugging first baseman Jimmy Hudgens (who spent parts of the 1923–1925 seasons with Fort Smith) is shown in Figure 2 boldly wearing a rather large number 22 on his left sleeve.

Hudgens had a career season for Fort Smith in 1925, leading the league in several key offensive categories. He batted .389 with 63 doubles and produced 168 RBIs over a 150-game schedule. As a result, Fort Smith won 94 games and the league title. Hudgens’s reward was a promotion to the Cincinnati Reds, who brought him to the majors for the final two weeks of the regular season. There is no date (stamped or written) on the reverse of the Hudgens photo, leaving open the possibility that Fort Smith actually donned uniform numbers prior to the 1925 season.

We also have proof that the Bloomington (Illinois) Bloomers of the Class B Three I League numbered their players in 1925. Pitcher Herman John Schwartje spent the 1925 season with Bloomington, where he compiled an 18–10 record for a team that won only 56 games and finished nearly 30 games out of first place. He is shown in Figure 3 as a member of the Bloomers wearing number 15 on his left sleeve. A career minor leaguer, Schwartje spent parts of 15 seasons toiling in the low minors, where he twice won at least 22 games. (After he did it a second time in 1922 — winning 23 games for Class B Saginaw — he was promoted to Class AA Rochester of the International League the following season. It would prove the pinnacle of his pro career.) 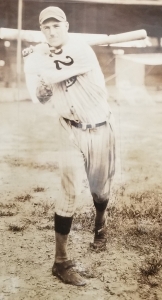 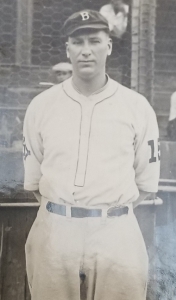 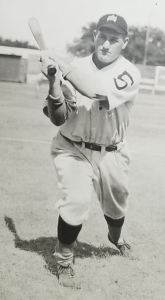 The final photo accompanying this article is that of outfielder Ike Boone. In Figure 4, Boone is shown wearing the uniform of the San Antonio Bears (Class B Texas League) with a large number five (5) on the left sleeve. The most important thing about this photo is that Ike Boone’s only season with San Antonio was 1923. He played for Little Rock in 1922 and when he tore up the Texas League in 1923 (hitting .402 and leading the league in hits, doubles, triples and RBIs), his performance for the Bears would get him promoted to the majors to join the Boston Red Sox for the final 10 days of the regular season. Boone would spend the entire 1924 and 1925 seasons with the Red Sox.

Thus, we now have definitive proof establishing that at least one minor league team wore uniform numbers as early as the 1923 season, a full two years prior to the American Association’s league-wide adoption of the same custom. Could there possibly be other minor league teams that also jump-started the custom a year (or more) in advance of San Antonio in 1923? I invite any interested SABR members to contact me with any information which might shed light on this topic.

MARK STANG is the author of nine books on major league baseball, including Baseball By The Numbers (Scarecrow Press, 1996), the definitive guide to major league uniform numbers. He can be reached at: markmstang@comcast.net.