This article was written by Campbell Gibson

Various terms, such as the Pythagorean Theorem of Baseball (used by Baseball-Reference.com) or the Pythagorean Expectation (used in the Wikipedia article), have been used to describe the formula developed by Bill James in his Baseball Abstract annual volumes to predict the number of games a team “should” have won in a season based on the numbers of runs scored and runs allowed. The formula used currently by Base- ball Reference may be expressed as:

where WP is the predicted winning proportion (i.e., wins divided by the sum of wins and losses), OR is opponents’ runs, and R is runs.

The New York Yankees and Philadelphia Athletics, loaded with Hall of Fame players, dominated the American League from 1926 to 1931, with three pennants for the Yankees followed by three pennants for the Athletics. The Pythagorean pennant winners for those six years present a different picture: Cleveland (1926), New York (1927), Philadelphia (1928 and 1929), Washington (1930), and New York again (1931). The Yankees dominated the American League with 14 pennants in the 16 years from 1949 to 1964, but won “only” 11 Pythagorean pennants during those 16 years, with Boston (1949) and Chicago (1960 and 1964) also winning Pythagorean pennants.

As noted earlier, the introduction of division play and postseason playoffs starting in 1969 changed things dramatically. From 1969 to 1993, with two divisions per league (East and West), there was one tier of playoffs to determine pennant winners. Since 1995, with three divisions per league (East, Central, and West), there have been two tiers of playoffs. (There was no postseason in 1994.) And since 2012, there has been a wild-card game before the two tiers of playoffs to determine pennant winners. In contrast to the 1901 to 1968 period, when the Pythagorean winner was also the actual winner a large majority of the time, since 1969 the Pythagorean winner has had to survive an increasing number of short postseason series to be the actual winner as well.

As a result, there are fewer cases of repeat winners since 1969, with only three cases of a team winning three consecutive actual pennants and Pythagorean pennants, all in the American League: Baltimore, 1969 to 1971; New York, 1976 to 1978; and Oakland, 1988 to 1990. Among the many cases of teams winning the Pythagorean pennant, but not the actual pennant, are the Chicago Cubs (1969 and 1970) and the Seattle Mariners (2001 and 2003). As a result Hall of Famers Ernie Banks and Edgar Martinez, and likely future Hall of Famer Ichiro Suzuki never had the opportunity to play in a World Series. 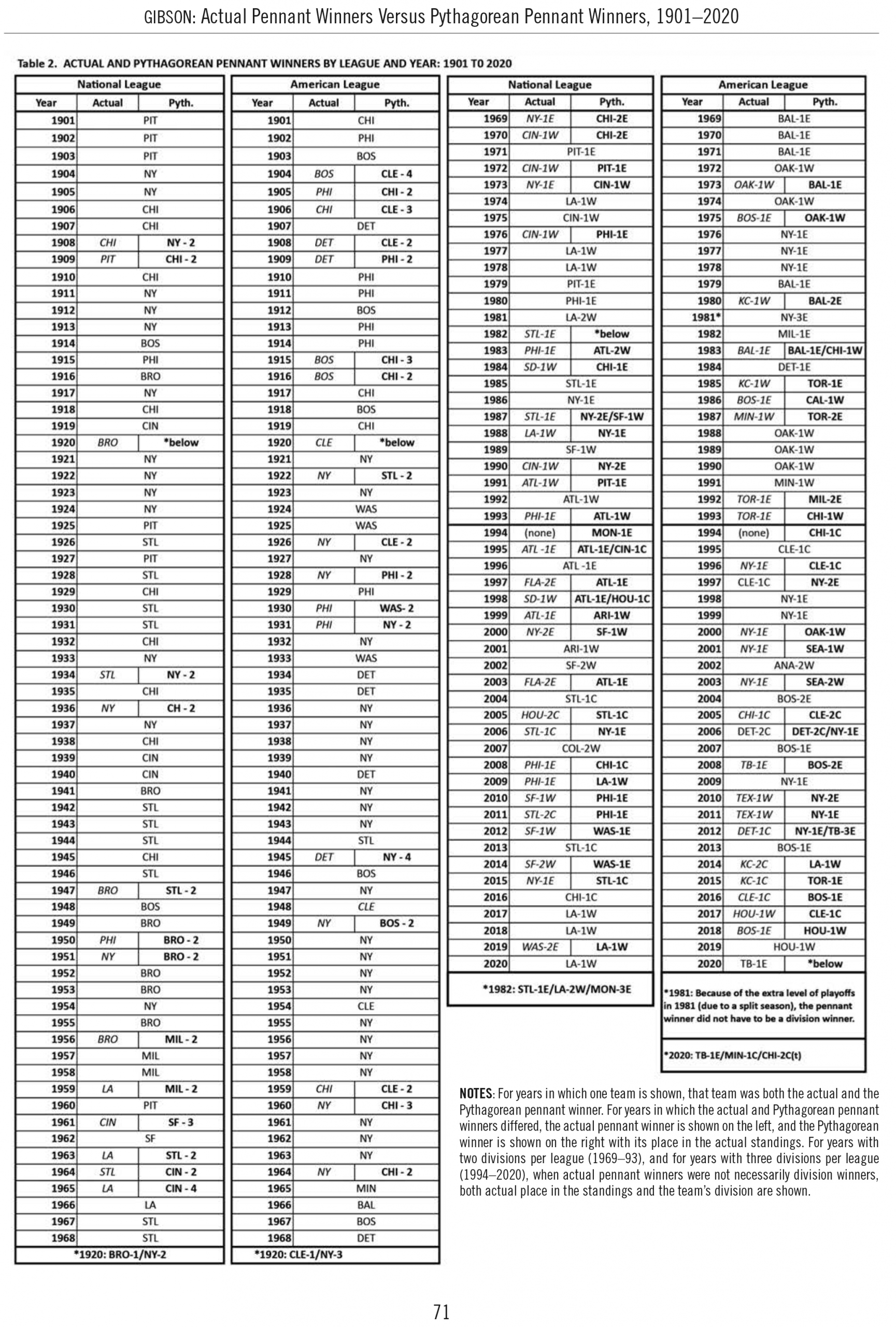 The most interesting seasons in my opinion are those in which there was the greatest total change in the won-loss records of the actual and the Pythagorean pennant winners, the leading case being the 1970 National League. Chicago won the Pythagorean pennant by three games over Cincinnati (94–68 versus 91–71). Cincinnati, which won the postseason playoff to win the pennant, had a 102–60 record compared with 84–78 for Chicago. Thus there is a 21-game difference in the actual and Pythagorean won-loss records of these two teams.

The second largest change involves the great Philadelphia Athletics team of 1931, with a 107–45 won- lost record (and a winning average of .704), which won the pennant by 13.5 games. They outperformed their Pythagorean prediction by 10 games while the New York Yankees, the Pythagorean pennant winner, underperformed by six games.

It should be noted that with postseason playoffs starting in 1969, the actual pennant winner may have been outclassed in both its actual and Pythagorean won-lost records. One example of this is the 1987 American League season, when Minnesota, a very average team during the season (R/OR=0.98) won the American League pennant in postseason play. Toronto had a much better Pythagorean won-lost record than Minnesota (100–62 versus 79–83), and both Detroit (98–64) and Toronto (96–66) had much better actual won-lost records than did Minnesota (85–77).

What accounts for the large changes shown in Table 3? Not surprisingly, teams that had a better actual won-lost record tended to do well in one-run games, and teams that had a better Pythagorean record tended not to do as well in such contests. (Data shown on extra-inning games are not discussed here because such records are subject to more random variation due to being fewer in number.) In the first season in the table, 1970 in the National League, the differences were pronounced. Cincinnati had a 27–15 record in one-run games (12 games over .500), while Chicago had a 17–21 record (four games below .500). Among the 12 seasons shown in Table 3, the differences ranged from pronounced to no appreciable difference. An ex- ample of the latter is provided by the 1987 American League season discussed above. The won-lost records in one-run games were nearly identical for Minnesota (24–22) and Toronto (27–24). 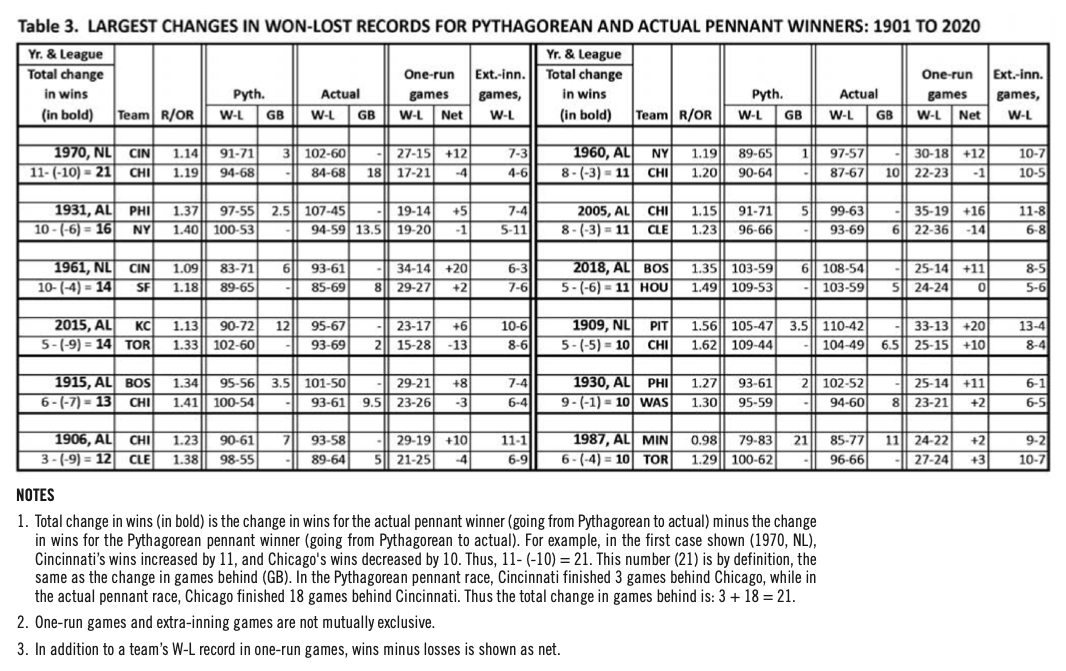 It would be expected that differences in performance in games decided by more than one run also could account for some of the differences noted between actual and Pythagorean records. In this regard, data on games by margin of victory are shown below for Cincinnati and Chicago in 1970. Not only did Cincinnati do better in one-run games than Chicago (27–15 versus 17–21), but also in two-run games (22–9 versus 9–19), three-run games (17–10 versus 15–12), four-run games (14–5 versus 10–9), and five-run games (8–1 versus 7–8). Chicago did better only in games decided by six or more runs (26–9 versus 14–20). Among games decided by five or fewer runs (the large majority of games), the won-lost records were 88–40 for Cincinnati and 58–69 for Chicago. Cincinnati’s nickname—the Big Red Machine—gained prominence in 1970 when the team won 70 of its first 100 games. Perhaps “winner of close games” would have been more accurate, since Chicago scored more runs during the season than Cincinnati (806 versus 775).

There has been a lot of research in recent decades on the role of luck in how well a team performs over the course of a season. The Baseball Reference website, in its tables showing detailed standings by season, includes each team’s actual and Pythagorean records and labels the difference between them as “luck,” and quantifies it as actual games won minus Pythagorean games won. Bill James, in his 2004 article “Underestimating the Fog” (BRJ, Vol. 33, pages 29–33) said that with regard to the assertion that winning or losing close games is luck: “it would be my opinion that it is probably not all luck,” suggesting that it was mostly luck. Examples of research focused on the role of luck over the course of a season include Phil Birnbaum in his 2005 article, “Which Great Teams Were Just Lucky?” and Pete Palmer in his 2017 article, “Calculating Skill and Luck in Major League Baseball.”1

While a team with an 87–75 record might have been viewed traditionally as slightly above average and a team with a 94–68 record might have been viewed traditionally as a good team, the reality is not so simple because random variation plays a major role in a team’s performance for a season. For example, a comparison of two teams, one with a 100–62 won-lost record and the other with a 90–72 record yields the following. Their standard deviations in wins are 6.19 and 6.32, respectively. The standard error of the difference between these two values, calculated as the square root of (6.19 squared +6.32 squared) is 8.85. The difference in wins between the two teams (10) divided by the standard error of the difference (8.85) is about 1.13, frequently referred to as the z-score. A z-score of 1 or more means that there is a 68 percent chance that the 100-win team is actually better than the 90-win team. A z-score of 1.13 corresponds to a 74 percent chance. A z-score of 2.0 would correspond to a 95 percent chance that the 100-win team is better. It is a matter of judgment what z-score value is used and depends how much the researcher wants to avoid concluding that the 100-win team is truly superior when this is not the case. However, it is most prudent (as in the case of most medical research) to use the more rigorous standard: a z-score of 2.0 or more corresponding to a 95-percent-plus confidence level before concluding that the difference in records was not due entirely to luck.

It has seldom been the case that the actual and Pythagorean pennant winners differed in wins by nine or more (corresponding generally to one standard deviation or more) and never by as much as 18 or more (two standard deviations or more). The largest difference was in the 1987 American League when, as discussed earlier, the difference between Minnesota’s actual pennant-winning record and Toronto’s Pythagorean pennant-winning record was 15 wins. It may be noted that it is also extremely rare that the “best team” (not necessarily the actual or Pythagorean pennant winner) in a season can be determined. This is because a season (with “only” 162 games) does not provide a large enough sample size to conclude that a team is the best team in its league unless it wins 18 or more games than any of its opponents.

It should be stressed, however, that the Pythagorean pennant winners are the result of a statistical model. A team’s record is determined by the aggregate performance of its players (batting, base running, fielding, and pitching). But this is a two-stage process. Player performance determines, subject to some variation, the numbers of runs scored and runs allowed by the team, which in turn determines the team’s won-lost record. In each of these two phases, a team can under-perform, perform as predicted, or over- perform. All the calculations above, starting with the 6.36 standard error for an average team’s won-lost record, reflect these two phases. The Pythagorean pennant winners are predicted with a model that starts with the team’s numbers of runs scored and runs allowed, thus excluding the variation inherent in an actual baseball season. Thus it may be the case that standard errors calculated for Pythagorean pennant winners should be different (and somewhat lower) than for actual pennant winners. It is my guess that it would still be the case that only a small proportion of the seasons with different actual and Pythagorean pennant winners would differ by one standard deviation or more in their records and that seasons with differences of two standard deviations or more would be extremely rare (perhaps just the 1987 American League).

CAMPBELL GIBSON, PhD, is a retired Census Bureau demographer, with interests in baseball ranging from biography to statistical analysis. His first article in the Baseball Research Journal was “Simon Nicholls: Gentleman, Farmer, Ballplayer” published in Vol. 18 (1989). His article “WAA vs. WAR: Which is the Better Measure for Overall Performance in MLB, Wins Above Average or Wins Above Replacement?” was published in Vol. 48, No. 2 (2019).

The author would like to acknowledge the comments and suggestions of two anonymous reviewers.