This article was written by David K. Anderson Sr.

Baseball fans have always enjoyed picking mythical “dream teams,” ranging from the serious to the whimsical. My work with the SABR Collegiate Baseball Committee got me involved in a project to select numerous new dream teams. The ultimate objective was to determine which college can field the strongest all-time alumni squad.

In an attempt to settle that question, 20 collegiate all-star teams were selected for the purpose of conducting a mythical All-Time Collegiate All-Star tournament. To be eligible, a player had to have performed in the major leagues, and to have been an alumnus of a qualifying college. Team play was to be resolved based on the statistics of each player’s best major league season.

The teams were selected based on information that was obtained from the colleges themselves, as well as from several helpful SABR members. Available data from many of the schools were incomplete or of questionable accuracy, as reliable records simply had not been maintained. Conflicting information even arose from some of the contemporary figures. Several sources, for example, listed Jim Essian as playing for Arizona State. One source that emphatically dissented, however, was Arizona State itself.

Participating schools ranged from the large state universities, such as Illinois, Michigan and Texas, to small private colleges like St. Mary’s, Holy Cross, and Bucknell. Some institutions (notably Arizona State and Southern California) have produced most of their major league alumni in recent years, so that even the names of their “fringe” players are familiar to modern baseball fans. Holy Cross, Brown and Bucknell, however, produced most of their players in the early part of this century or before, with many player names being unfamiliar to all but the most ardent baseball researchers. Why haven’t these schools continued to attract players of major league potential?  Well, at Bucknell, baseball scholarships aren’t even offered!

A few of the participating players were never members of heir schools’ varsity rosters. Carl Yastrzemski, for example, played nly one season of freshman ball at Notre Dame before being lured way by a Red Sox contract. And Cap Anson played intramural aseball at Notre Dame over 25 years before the first intercollegiate quad was organized.

Speaking of the Irish, four of their alumni also qualified to play or other tournament teams – Lou Sockalexis and Doc Powers both Holy Cross), Bert Daniels (Bucknell), and Tillie Shafer (Santa Clara).

Many of baseball’s greats were collegiate stars in their younger days, such as Frankie Frisch (Fordham), Eddie Plank (Gettysburg), Eddie Collins and Lou Gehrig (both at Columbia). None of these schools, however, apparently produced enough major leaguers to field an alumni team.

Rosters of the qualifying schools, however, do feature several Hall-of-Famers, including Anson, Lou Boudreau, Charlie Gehringer, Christy Mathewson, Robin Roberts, Jackie Robinson, Joe Sewell, and George Sisler. On the other hand, many of the players are far from being superstars, as some played only part of one big-league season.

The collegiate team rosters provide some interesting contrasts. At talent-rich Southern Cal, Arizona State and Notre Dame, players with several years of major league experience were unable to make their school’s 25-man roster. Other colleges, however, were barely able to scrape together a starting lineup, one or two reserves, and a pitching staff.

So that each school might field its strongest starting line-up, some defensive adjustments were made. With Sal Bando as Arizona State’s third baseman, for example, fellow Sun Devil Bob Homer was moved to first base – a position which he has rarely played in the major leagues.

Some of the collegiate lineups feature offensive strength that would be a nightmare to opposing pitchers. Would a hurler dare pitch around Michigan’s Charlie Gehringer with George Sisler on deck? What kind of run production could be expected from Alabama with Joe Sewell, Riggs Stephenson and Ike Boone batting back-to-back? And how about Rick Monday, Reggie Jackson, Bob Homer and Sal Bando of Arizona State?

No team evaluation can be complete until consideration is given to the “intangibles.” Statistics alone cannot realistically portray the controversial Santa Clara Broncos, a squad that features the likes of Jimmy O’Connell (who was banned from baseball for life) and the notorious Hal Chase.

Which school has the most powerful all-time alumni team? Neither statistical team replay nor discussions among fans will ever settle that issue to everyone’s satisfaction. What cannot be disputed is that collegiate baseball is an important contributor of talent to the major leagues. Will it someday become the prime target pool for major league baseball, as colleges have always been for professional football and basketball?

Here are the all-star teams of 20 American colleges, arranged on a regional basis to the extent that is possible. 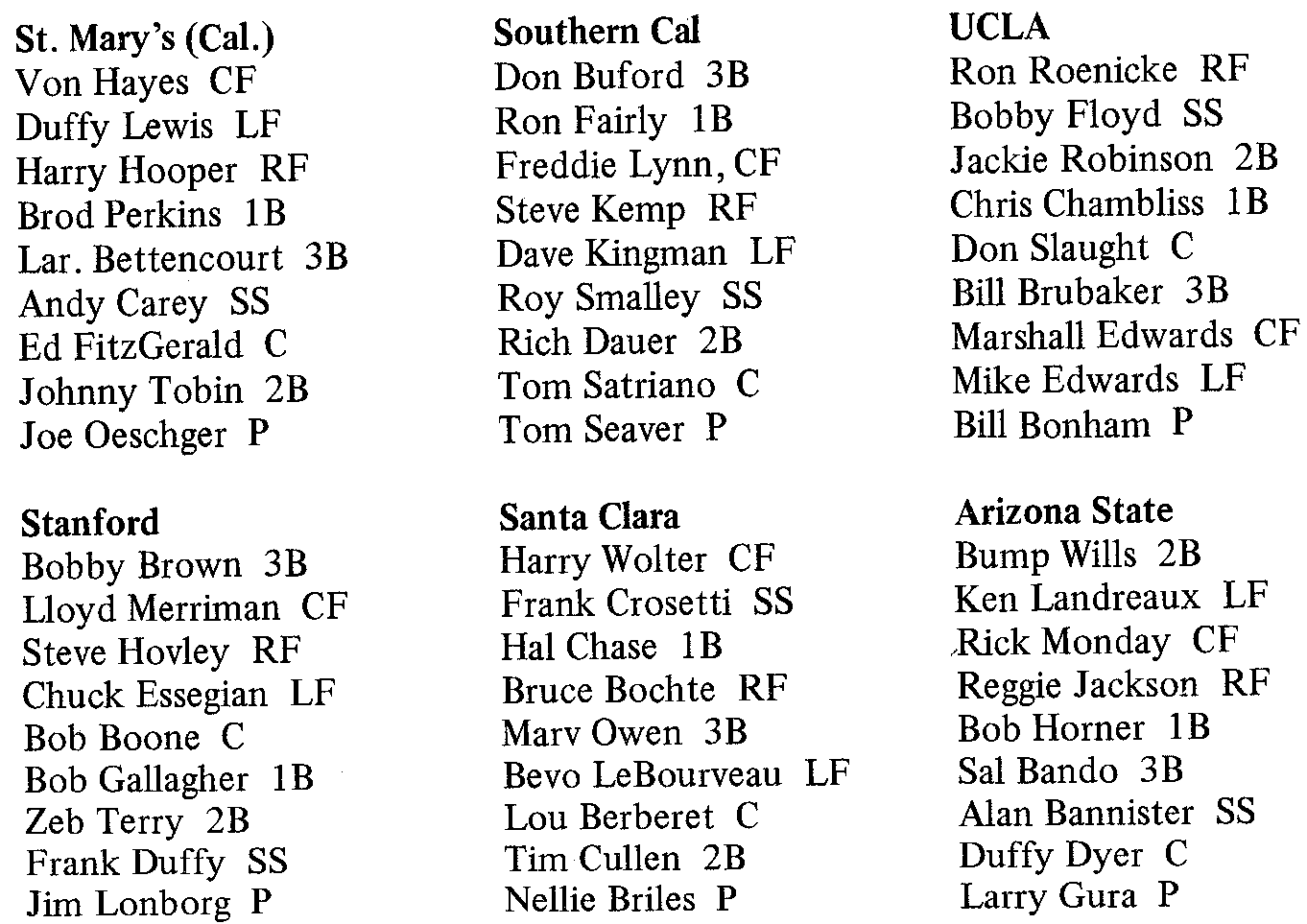 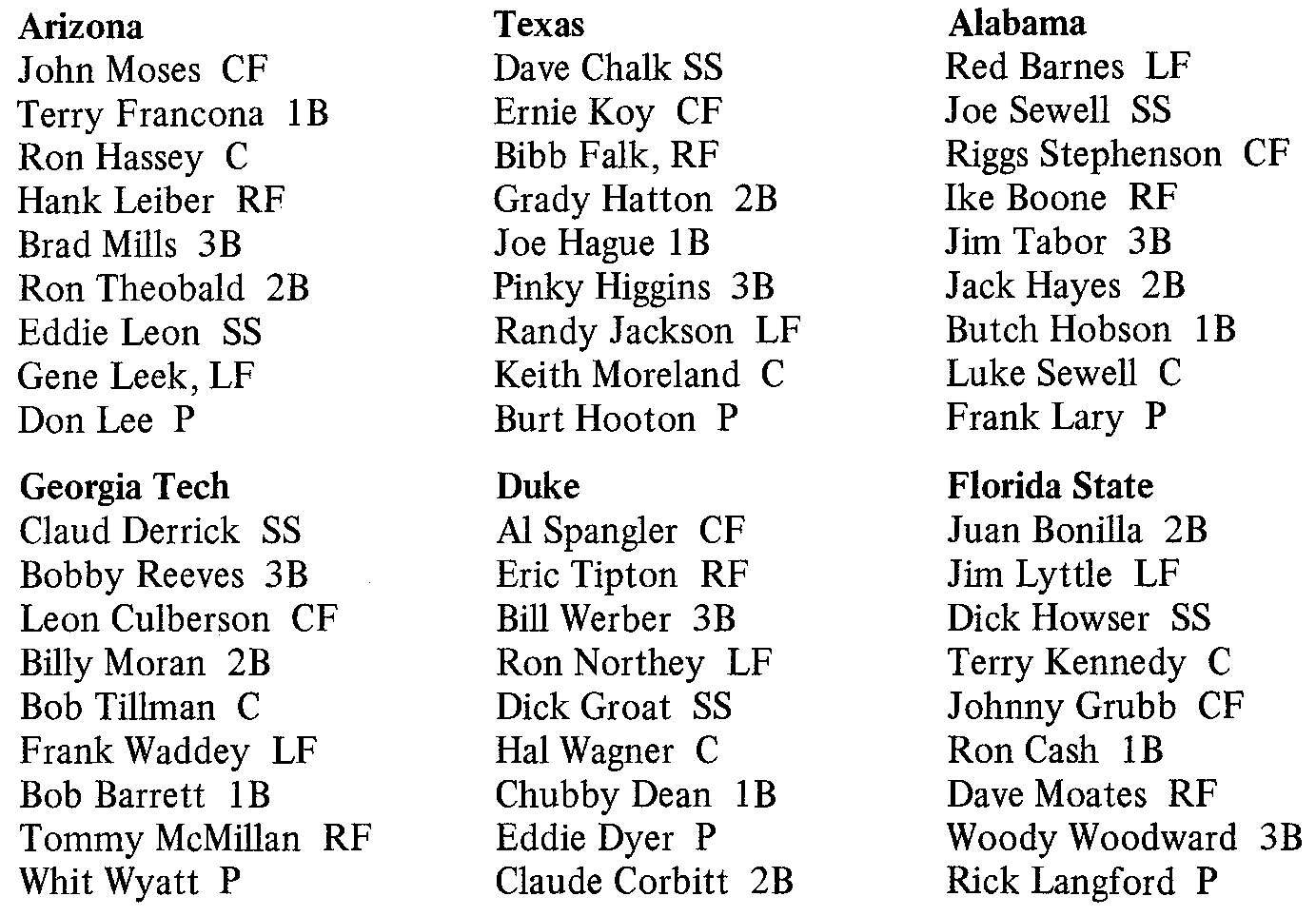 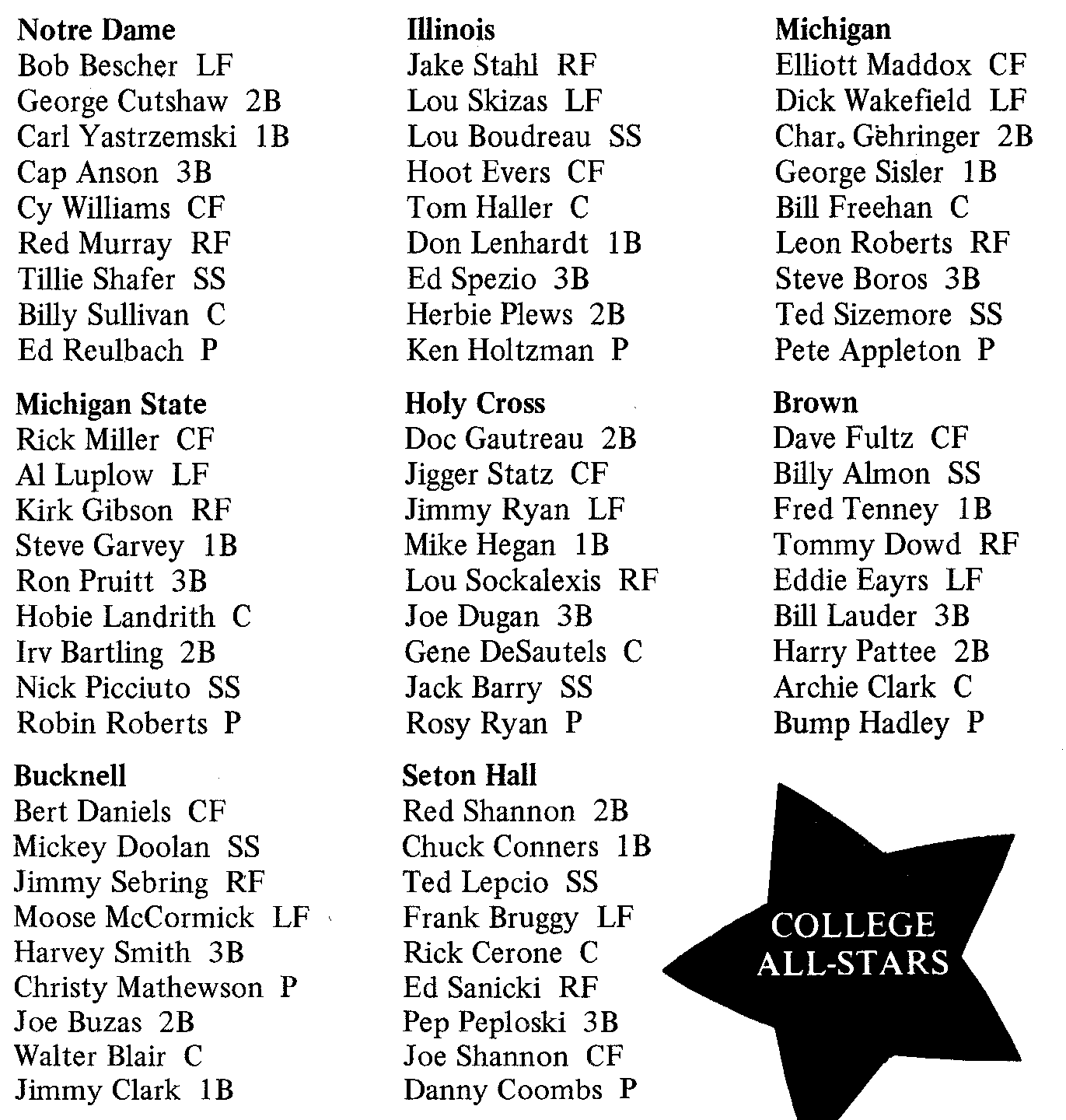