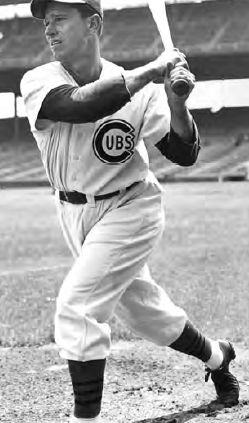 This article was written by Joe Niese

From the moment Andy Pafko put on a Chicago Cubs uniform he was a fan favorite. He debuted on September 24, 1943, in a rain-shortened, five-inning 7–4 victory over the Philadelphia Phillies. In front of a crowd of 342—the smallest to ever see a game at Wrigley Field—he went 2-for-3 with a double and four RBIs.

He continued to blossom in 1944 under the guidance of Charlie Grimm, who returned to manage the club after the early-season resignation of Jimmie Wilson. In 1945, Pafko made the NL All-Star team (though the game wasn’t played) and helped the Cubs to the World Series, hitting .298 with 12 triples, 12 home runs, and 110 RBIs. He finished fourth in National League MVP balloting.[fn]Teammate Phil Cavarretta won the award.[/fn] His play carried over into the October, and though Chicago lost in seven games to the Detroit Tigers, Pafko was arguably the star of the series.

The 1945 baseball season was the last of the World War II years. Most rosters were depleted by war, but a few, including the Cubs’, remained relatively intact. Several Chicago players held 4-F status (exemption from the war due to a variety of maladies) including Pafko, who had both a perforated ear drum and high blood pressure. Major league baseball was clearly being played at a lower caliber as a result of the war, and the drain on many teams’ top talent helped both the Cubs and Tigers win the pennant. When longtime Chicago sportswriter Warren Brown was asked who he thought would win the 1945 World Series, he responded, “I don’t think either can win it.”[fn]Charlie Grimm and Ed Prell, Jolly Cholly’s Story: Baseball, I Love You! Chicago: Henry Regnery Company, 1968, 171.[/fn]

Pafko’s best game of the series was Game One in Detroit, which he would later call “my biggest game of all-time.”[fn]Rick Phalen, Our Chicago Cubs: Inside the History and the Mystery of Baseball’s Favorite Franchise, South Bend, Indiana: Diamond Communications, 1992), 21.[/fn] Behind the pitching of Hank Borowy, whom the Cubs had acquired from the New York Yankees at the trade deadline, Chicago won 9–0. The Cubs chased Detroit’s Hal Newhouser, winner of back-to-back American League MVPs in 1944 and ’45, after just 2 2?3 innings. Pafko went 3-for-4 and kept the shutout intact with a perfect throw in the fifth inning to nail Tigers runner Eddie Mayo at third base. “I didn’t have a chance,” said Mayo after the game. “That throw came up to third like it was out of a cannon.”[fn]“A Paving Brick Helps Cubs Win!” Chicago Tribune, October 4, 1945.[/fn]

The Tigers won Game Two, 4–1, but Pafko, who went hitless, once again shined in the field, making what The Sporting News called the “fielding masterpiece of the game,” when he “went against the screen in deepest center near the 400-foot mark.”[fn]“Perfect Peg by Pafko,” The Sporting News, October 11, 1945.[/fn]

Pafko’s bat went silent after the seventh inning of Game One, as he was hitless in his next 15 at-bats. He hit just .214 in the series overall. But despite his hitting woes, Pafko had captivated many with his play. When the Cubs returned to Chicago after winning Game Three, 3–0, Pafko found the bed in his hotel room covered in letters and telegrams.

After the Cubs dropped Game Four, 4–1, Pafko, along with his brothers Mike, John, and Ed, and Joe Fujko, the manager from his town ball days, returned to Pafko’s hotel room before attending a banquet in his honor at the Zion Lutheran Church. “Andy is very popular with Chicago fans and sportswriters,” Fujko told the Dunn County News. “The cameramen were taking pictures of him every chance they got. Autograph seekers are quite a problem with him as they crowd around him and follow him for blocks.”[fn]Dunn County News, October 11, 1945. [/fn]

The Cubs and Tigers split the next two games, setting up a decisive Game Seven. The Milwaukee Journal dispatched journalist Wallace MacIver to Western Wisconsin to witness Pafko’s hometown of Boyceville following baseball’s newest darling. MacIver visited a town barbershop, the Pafko family farm, and Boyceville High School, where students gathered to listen to the game on the radio in the auditorium. The piece eventually ran as a multi-page spread in The Sporting News.

The Cubs dropped the final game 9–3, but Pafko did set a World Series record for most chances by an outfielder with 26. Even though the Cubs lost the series, his name remained a topic of conversation. At the 1945 Washington Touchdown Club luncheon, Frank O’Neill, new president of the Baseball Writers’ Association of America, compared his outfield play to that of the great Tris Speaker, saying Pafko “would have been the Series hero if the Cubs had won.”[fn]“Buck O’Neill Lauds Pafko,” The Sporting News, October 25, 1945.[/fn]

Rick Phalen, Our Chicago Cubs: Inside the History and the Mystery of Baseball’s Favorite Franchise, South Bend, Indiana: Diamond Communications, 1992.