This article was written by Phil Birnbaum

Bill James recently asserted that Dick Cramer’s famous 1977 clutch-hitting study, which purportedly demonstrated that clutch talent is a myth, was fatally flawed. James argued that the study’s finding that year-to-year clutch hitting looks random was not enough to show nonexistence. Here, the author uses statistical methods to try to determine whether James’s argument is indeed correct.

In the Baseball Research Journal in 1977, Dick Cramer published a now classic study on clutch hitting. He looked at the best clutch hitters in 1969 and found that, on average, they reverted to normal in 1970. Cramer concluded that, since the 1970 performances looked random, the lack of persistency showed that the 1969 performance was simply random luck and, therefore, that clutch hitting as an ability does not exist.

Twenty-seven years later, in the same publication, Bill James disputed Cramer’s conclusion. In his essay “Underestimating the Fog” (critiqued by Jim Albert in By the Numbers 15, no. 1, February 2005), James wrote that

random data proves nothing—and it cannot be used as proof of nothingness. Why? Because whenever you do a study, if your study completely fails, you will get random data. Therefore, when you get random data, all you may conclude is that your study has failed. [emphasis in original]

This is certainly false. It is true that, when you get random data, it is possible that “your study has failed.” But it is surely possible, by examining your method, to show that the study was indeed well designed and that the random data does indeed reasonably suggest a finding of no effect.

But you have to look at the specifics of the study. For some studies, you’ll find that the study has indeed “failed”—that, even if a substantial effect existed, the study would still have found random data. But, contrary to Bill James’s assertion, many studies will indeed be powerful enough to find a relationship if one exists—and, for those, a finding of random data is powerful evidence of a noneffect.1

James disputes this result, writing that “it is simply not possible to detect consistency in clutch hitting by the use of this method.” Is this correct? If clutch hitting were a consistent skill, would the Cramer test have been powerful enough to pick it up?

The results: a correlation coefficient (r) of .0155, for an r-squared of .0002. These are very low numbers; the probability of the f-statistic (that is, the significance level) was .86. Put another way, that’s a 14 percent significance level—far from the 95 percent we usually want in order to conclude there’s an effect.

So this study reaches the same preliminary conclusions as Cramer’s—players with good (or poor) clutch hitting in 1974 showed no tendency to repeat in 1975. Standard statistical operating procedure would have us conclude that there’s no evidence of a clutch effect.

But does this constitute good evidence that clutch hitting does not exist? We can’t answer that question yet. It could be that the study simply isn’t strong enough to find such an effect if it exists. If that’s the case, then, as James suggested, we’d get random data whether an effect existed or not, and the study could be said to be a failure.

But not a complete failure. What the study does clearly tell us is the relationship between a player’s 1974 performance and his 1975 performance. It tells us that relationship is very weak.

We may not be able to say for sure, yet, that the statement “clutch-hitting talent exists” is false. But the statement “Because Wade Boggs hit 110 points better in the clutch in 1989, he must be a good clutch hitter” is definitely false, because we have shown that, even if clutch hitting exists, there is no season-to-season consistency.

Yes, this study has not necessarily proven that clutch hitting doesn’t exist. But it does show that, if clutch hitting did exist in 1974–75, it was in very, very small quantities. 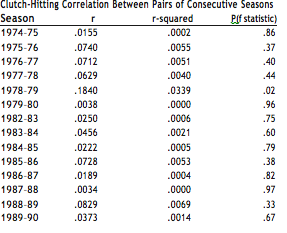 The results are pretty consistent: None of the pairs shows anything close to statistical significance, except one—1978–79. But that one shows a negative correlation; players who hit well in the clutch in 1978 hit poorly in the clutch in 1979. Since we have no reason to believe that clutch hitting one year turns you into a choker the next, that season is probably just random noise.

I have no explanation for why 1979–80 is so highly negative, or for why the correlation is positive in 12 of the 14 years. In any case, we do have confirmation of Cramer’s findings in all 14 of those seasons—in none of them did clutch performance this year significantly lead to clutch performance next year.

POWER OF THE SINGLE-YEAR CRAMER TEST

Back to the question—if clutch hitting did exist, would this study have been able to find it? James seemed to imply that the question could not be answered, and we therefore must assume the answer is no. But we can answer it.

Let’s suppose a clutch-hitting ability existed and that the ability was normally distributed with a standard deviation (SD) of .030 (that is, 30 points of batting average).

Statistically, that would mean that, of the 137 players,

If that were the case, we would probably agree that clutch hitting is a reasonably important part of the game. But, still, two-thirds of all players are only 30 points different in the clutch, and only one regular player in the league has a 75-point difference (and it might go either way).

We would probably say that clutch hitting is reasonably significant—something for the player’s manager to keep in mind, along the lines of a platoon differential, for instance.

So, back to the original question: Would the Cramer test be able to pick up this distribution of clutch talent? To check, I took the 137 players in the 1974–75 sample and assigned each of them a “clutch talent” based on this normal distribution.4 Then, I threw away their real-life “hits” columns and simulated their actual number of clutch and non-clutch hits based on their clutch and non-clutch expected averages.

I repeated this test 14 times, for easy comparison to the 14 years of data shown in table 1.

The results: In 11 of the 14 cases, the Cramer test had absolutely no trouble picking up the clutch hitting at the significance level of .05: 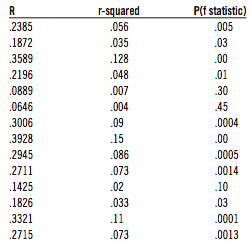 To make things clearer, here are the probabilities (third column of the table) summarized in table form. The top row is for the real-life data (from table 1); the bottom row is for our simulation (table above). Statistically significant samples (.05 or lower) are in bold, and “Neg” indicates a negative correlation:

Let’s repeat the experiment, but this time with an SD of 20 points and 28 simulated seasons instead of 14. I will leave out the full results and go right to the table of significance levels:

Overall, 12 of the 28 simulated runs found statistical significance, while many of the others were low, .2 or less. Again, there’s no comparison between the real-life data and the simulation, and we can again conclude that, if clutch hitting existed at the 20-point SD level, the Cramer test would have found it.

So, let’s now try an SD of 15 points, or .015. This is half of what we started with, which would mean that only one player in both leagues would be as much as 45 points better (or worse) in the clutch.

Since the significance levels will start to vary more, I’ll run more of them. Here are four rows of simulated data, again with the real-life data in the top row:

We’re down to only 11 significant simulations out of 56.

But there are still a few close calls and the numbers lean toward the smaller, which suggests that the test is picking up a real effect. Still, the test seems to have gotten significantly weaker.

There are five significant findings out of 56—about 9 percent, whereas 2.5 percent would be expected by chance—but the numbers are getting bigger. The real-life row of data still doesn’t quite fit in, but it’s getting pretty close. We certainly can’t say that an SD of .010 is out of the question, but, still, it does look a bit doubtful.

Although there are still a couple of significant results, our row of real-life data fits right in among the other rows. It’s fair to say that the Cramer test does indeed “fail” when the standard deviation of clutch hitting is as low as .0075.

Instead of using the simulation, we can produce an actual measurement of the power of the Cramer test by using a freeware software tool called GPOWER.5

Suppose clutch hitting existed but with a real-life correlation of .25. That would mean that, roughly speaking, a player who hit 110 points above average in the clutch this year would hit about 27 points higher in the clutch next year. What are the chances the 1974–75 Cramer test would find a statistically significant result? GPOWER’s answer: 91.3 percent. That means, on average, we should have found 13 significant real-life seasons out of the 14. We actually found zero.

If we take all 14 years of the Cramer test and put them in one large regression, that would save us having to look at 14 different regressions. It might also find a real effect where it couldn’t before, since 14 seemingly random results often combine to give a very significant one. For instance, when a player goes 2 for 5, he might just be an average player having a good day; but when he goes 2 for 5 over a whole season, he’s Ted Williams. In the 14 seasons in the study, there were a total of 2,057 season-to-season comparisons. Running a regression on those seasons gives:

This is, decidedly, an insignificant result. If clutch hitting were truly and completely random, on average we would get a significance level of .50—and we got .52, which is very close. This is far from the .05 we would want to see to conclude that clutch hitting is real.

What about the simulation? Let’s start with a standard deviation of 15 points, where the one-season Cramer test was successful only about 20 percent of the time. I ran 15 copies of each 1974 player, for a total of 2,055 player-seasons:

The simulation turns out significant at the 2 percent level. But it could be a fluke—let’s run it a few more times, and compare it to the real-life .52 (not shaded):

The 14-seasons-combined Cramer test seems to find clutch hitting at a standard deviation of .015 almost all the time. And, in fact, our .52 “real-life” significance level is very much out of place in this list.

Three of the 19 simulations came up with significant results; several others were very close; and most of the numbers are low. However, there are a few higher numbers, and the real-life .52 isn’t completely out of place here. We can say, then, that the 14-season-combined Cramer test begins to “fail” at a standard deviation of about 10 points.

By using the Cramer test on one large sample of 14 seasons combined, we are almost certain to notice an effect all the way down to an SD of .015. But at .010, a finding of significance is unlikely.

As for clutch hitting itself:

The results confirm other studies, including Pete Palmer’s multiyear study (By the Numbers, March 1990), that failed to find clutch hitting.

In summary: The Cramer test doesn’t prove that clutch hitting does not exist. But it does prove that, if clutch hitting does exist, for the vast majority of players it’s at levels almost too small to be detectable or important and that previous clutch-hitting performance is not a reliable predictor of future clutch-hitting performance. This suggests that, in any case, it is probably impossible to distinguish good clutch hitters from bad.

PHIL BIRNBAUM is editor of By the Numbers, the newsletter of the SABR Statistical Analysis Committee. A native of Toronto, he now lives in Ottawa, where he works as a software developer.

This article was originally published in the newsletter of SABR’s Statistical Analysis Committee—By the Numbers 15, no. 1 (February 2005).