This article was published in the Fall 2015 Baseball Research Journal

For most of the first 100 years of major league baseball, owning a team could be profitable or perilous. Some club owners made fortunes and wore handmade silk shirts. Others lost their shirts, whatever they were made of. Some did both in their lifetimes. 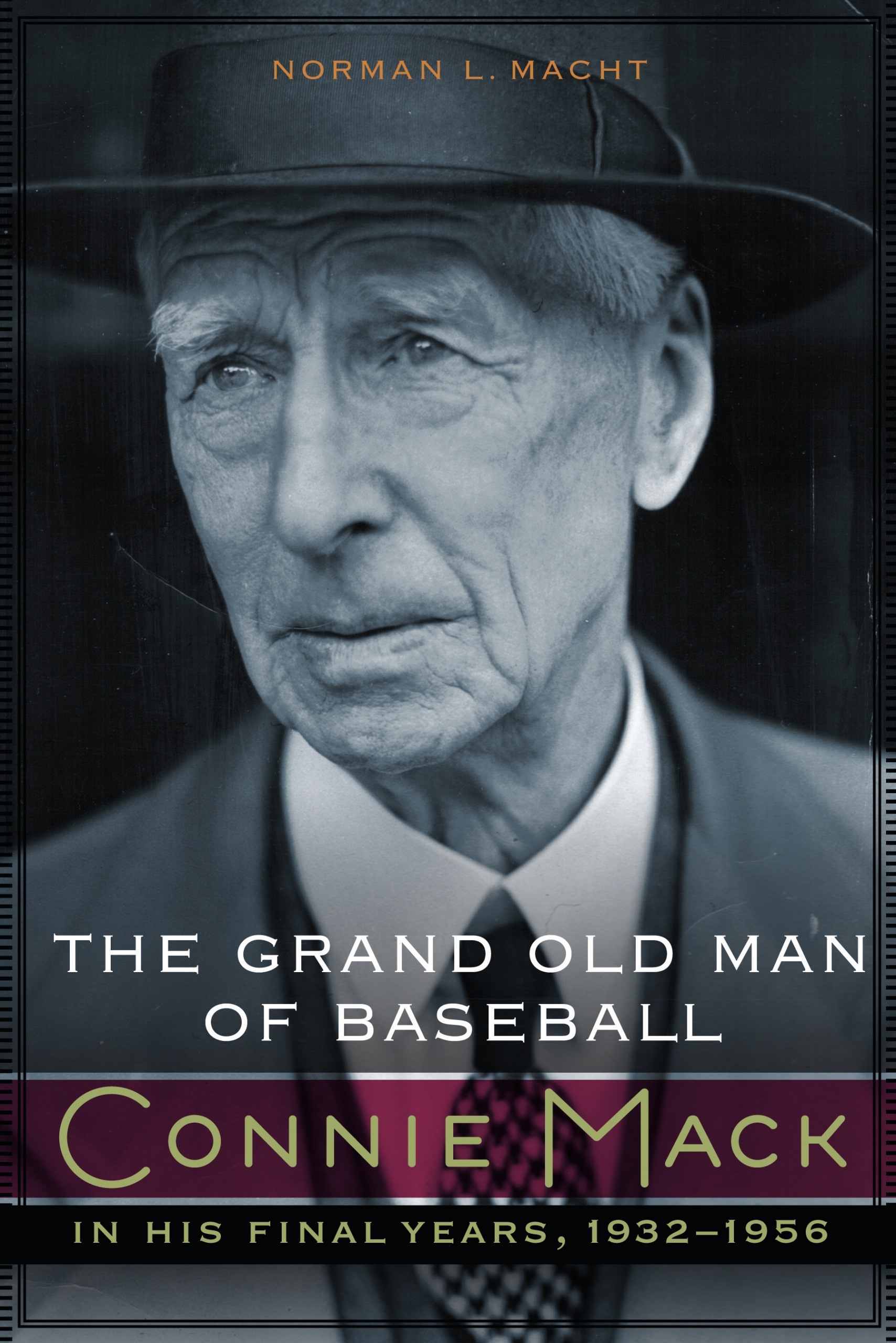 Connie Mack was in the latter category. The patterns of his Athletics’ fortunes both on and off the field as well as his personal income resemble the blueprint of a theme park roller coaster.

At the end of the 1932 season, in which every major league team lost money, Mack said, “I feel that I’ve been a failure, not in playing results but financially… Any man who can’t make ends meet must be a failure. And I didn’t make ends meet for the Athletics.”

Was Mack a financial failure? In this excerpt from The Grand Old Man of Baseball, the third and final volume of my Mack biography, I tried to assess his record as a businessman through 1932, and his personal finances for his lifetime.

Accurate information about the early days of the business of baseball is hard to pin down. Newspaper accounts were often estimates—or just guesses. Recently discovered A’s ledgers—found since the publication of the first two volumes in this trilogy— give us what seems to be an accurate, authentic source. But the profit and loss figures, for example, differ—sometimes drastically—from other sources such as the official report of the congressional Organized Baseball Hearings of 1951, the so-called Celler Committee. Maybe different bookkeeping methods account for the differences. So a researcher seeking accuracy has to make choices.

I have chosen to go with the unaudited entries made by longtime A’s secretary Bob Schroeder in the ledgers that begin in 1910. Where other sources are used, I identify them.

Was Connie Mack a financial failure?

Not when you consider that every American League team operated at a loss in 1932. Only the sale of Simmons, Haas, and Dykes enabled the A’s to show a profit.

Measured by the preceding thirty-one years, Mr. Mack was a very successful businessman.

When Connie Mack rode into Philadelphia in 1901, he was staking a claim on a gold mine richer than anything the forty-niners had found in California. Big league baseball was a very profitable business, a fact that led tycoons in other businesses to invest in the Federal League. Baseball was the only form of professional sports entertainment for the masses. Horse racing ran a distant second, and prize fighting was far behind in the competition for the dimes of the sporting crowd.

As much as he scoffed at writers’ estimates of how much money he had taken out of the business, by the standards of the time—especially the pre-World War I time—Mack was a wealthy man.

The bulk of his early income probably came from dividends declared by the club’s board of directors. A 1907 Sporting News article signed “Veteran” estimated that in the first six years of their existence, 1901–06, the Athletics earned over $100,000 in each of their pennant-winning years, 1902 and 1905, and “big profits” in the other years. At that time Mack owned 25 percent of the stock; therefore his share of the dividends “must total over $100,000.” This is guesswork and assumes that all the profits were paid out in dividends, an assumption for which we have no confirmation. The A’s were probably just as profitable in 1907 and 1909, when they finished second, but they may have lost money in 1908, when they finished sixth and attendance fell almost 30 percent.

In 1912 Ben Shibe loaned Mack $113,000 to buy out the newspapermen who had been given a 25 percent interest in the team in 1901. After giving five shares each to his sons, Roy and Earle, Mack now owned just under 50 percent of the stock.

Mack also profited from outside investments. He opened a bowling alley in 1903 and sold it at a profit a few years later. He and John Shibe bought five acres in the exclusive Bala neighborhood of Philadelphia in 1906 and built twelve homes.

Owning a piece of the Athletics provided another source of income. The sale of food and drinks and scorecards, advertising in scorecards and on outfield fences, and the renting of cushions was an important part of the baseball business from the beginning. In the nineteenth century the ballgame was sometimes an incidental attraction to lure patrons to an adjacent beer garden. As early as the 1880s a club could earn a thousand dollars for scorecard rights alone. Even minor league teams received offers every spring for scorecard and refreshment privileges.

Some clubs ran their own concessions operations; some leased the scorecard and concessions privileges to pioneers in the catering business, such as Harry M. Stevens, Ed Barrow, and the Jacobs brothers (Marvin, Charles, and Louis), who went on to create Sportservice, for a percentage of the gross or a fee based on attendance.

The Athletics may have been unique: they did both. Connie Mack and the Shibes formed a separate partnership to manage the concessions and paid the club a pittance to lease the privileges. There is no record of when the Athletics’ owners decided to take this direction. They may have started the business that way in 1901. It might have coincided with the opening of Shibe Park in 1909.

The 1910 club entries show $3,000 in income from the sale of privileges, two-thirds for refreshments and one-third for scorecard advertising. The same annual payments were made by John Shibe, who ran the catering business until his death in 1937, when a new Shibe Park Concessions Company was formed. While the Pirates might earn $35,000 a year from concessions privileges at seven cents a head in the 1930s and the Yankees $159,000 at eighteen cents a head in the 1940s, the new partnership of the Macks and Shibes paid the same $3,000 a year to the Athletics until 1939, when they raised it to $5,000. In 1941 it was raised to $5,500 and remained there through 1945, when it went up to $20,000.

A 1929 survey estimated that 5.5 percent of major league revenue came from concessions; for some clubs they were the most profitable part of the business. Those profits never appeared on the Athletics’ profit and loss statements. They were distributed to the Athletics’ stockholders on a per-share basis. Prior to 1914 Connie Mack owned 25 percent; after that, 50 percent, until his distribution of stock to his sons in 1946, when he was left with 20 percent.

What did Connie Mack’s share of those concessions profits amount to from 1910 through 1950? We can only estimate based on various bits of information from occasional Sporting News articles on this side of the business, a 1937 Fortune article, and citations from the work of Steven A. Reiss in Baseball in America and America in Baseball.

To begin, it’s necessary to understand that the Athletics never sold outfield fence signs, which were worth as much as $25,000 in some cities. They gave away scorecards for many years, and they never sold beer. A 1959 Inquirer story (when there was talk of the Phillies’ building a new park in New Jersey because of Pennsylvania’s Sunday curfew law and ban on the selling of beer in ballparks) cited “recent figures” that the average fan spent seventy-five cents during a game. “In Philadelphia it’s only twenty-five cents. The difference is beer.”

From the day the Phillies moved into Shibe Park in August 1938, the concessions company split the profits from sales at the Phillies’ games with their tenants. It kept all the receipts from the Eagles and Villanova football games played at Shibe Park and catered events at other venues.

So what figures should we use? We’re talking about a long-ago world of nickels and dimes. Hot dogs, sodas, and peanuts sold for ten cents until the 1940s, when Durk’s hot dogs went up to fifteen cents. A 1940 Shibe Park menu lists sandwiches at fifteen and twenty cents, a hot plate of ham or steak with two vegetables for forty cents.

So over forty years Connie Mack received a total of about $655,000 as his share of the concessions profits. Had the total profits gone to the club, they would have added more than $1.5 million to the working capital.

In 1951 Penn Sportservice began paying $200,000 to the club for the concessions privileges.

By the 1920s Connie Mack was proud to be worth a million dollars. In a revocable trust dated April 23, 1928, Mack provided for his wife and three adult children, all from his first marriage. His wife, Katherine, had a 5 ⁄8 interest, and Roy, Earle, and daughter Marguerite, 1 ⁄8 each. Mack put into the trust his 747 shares of the Athletics. Dividends totaling almost $50,000, paid in 1928 and 1929, and Mack’s income from the concessions went into the trust.

The farsighted trust, effective for the life of the beneficiaries, described all sorts of contingencies on the death of any of them, with the A’s stock or (if sold) the proceeds passing to grandchildren and their heirs.

Then the stock market crashed and cleaned him out. He never made back the million. Mack revoked the trust in 1930. The securities were returned to him, and all accumulated income was distributed to the four beneficiaries.

From the day he arrived in Philadelphia, Mack had supported his mother and three children, along with various relatives and in-laws. In 1910 he started a second family, which produced five children. By the end of his life he was still subsidizing some of his children and was generous with relatives, grandchildren, old-time players, and countless others. When Connie Mack died in 1956, his estate, except for the proceeds from the 1954 sale of the team, would total less than $60,000.

NORMAN L. MACHT’s thirty-year project documenting the life of Connie Mack concluded with the publication of the third and final volume on October 1. Now living in Escondido, California, at 86 he is not contemplating another thirty-year project. Maybe twenty years.