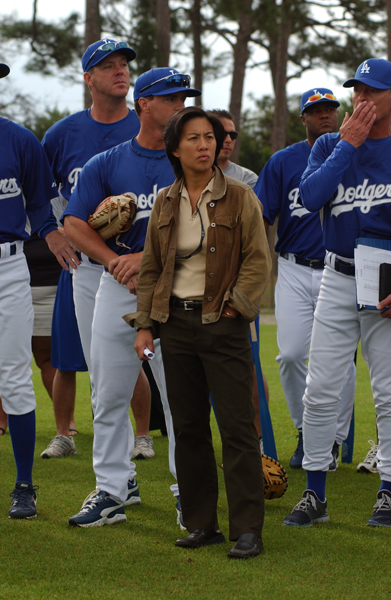 This article was written by Sherri Eng

Los Angeles Dodgers Assistant General Manager Kim Ng never thought she would become one of the highest-ranking women in the sport. After all, what place did women have in a sport run by the good ol’ boys? And yet by the beginning of 2011 she was frequently touted as a sure bet to be the first female general manager in Major League Baseball.

Ng was born in Indianapolis, but grew up in Queens, Long Island, and New Jersey. Her parents—dad, Jin, a financial analyst, and mom, Virginia, a banker—might have preferred the eldest of their five daughters to choose a more traditional profession such as law or business, but young Kim had other ideas. She loved sports—stickball, tennis, skating, and skiing were her activities of choice. Although she lived just a stone’s throw from Shea Stadium while growing up, it was the Yankees who captured her heart. “They were pretty good in the ’70s and ’80s,” notes Ng. She went on to play infield for the University of Chicago’s softball team.

It is somewhat serendipitous that Ng has emerged as one of the top-ranking women in professional baseball. With her newly minted bachelor’s degree in public policy, Ng applied for a variety of jobs at different sports organizations and landed an internship as a research assistant at the Chicago White Sox in 1991. Computers and data analysis were just beginning to gain traction, and Ng was good at it.  After three or four months, Ng had impressed the organization so much that management offered her a full-time entry-level job, where she did everything from entering scouting reports to operating the radar gun. She showed a propensity for numbers and soon took over the team’s salary arbitration duties. She was later promoted to assistant director of baseball operations.

“I never thought about working in operations for a sports organization. I thought that marketing or sports information would be more likely areas,” says Ng in a soft but confident voice. “I just didn’t think there were opportunities in operations for someone like me until I went to the White Sox.”

Then-White Sox GM Dan Evans was impressed by Ng’s analytical ability and attention to detail. Her strong work ethic and dedication to delve into whatever she was working on were traits that convinced Evans that Ng had the makings of a future top baseball executive. “Kim is one of the most inquisitive minds I’ve ever been around,” says Evans, president and chief executive officer of Paragon Sports International, a Pasadena, California-based sports management firm. “She asked really solid questions as to why we were doing certain things. As a result, it made me rethink some of my beliefs and procedures. You could tell that she was going to go far because she had that combination of street smarts, book smarts, and stick-to-it-ive-ness that you can’t teach.”

Her persistence and drive have kept Ng in a game where the work of scouting, drafting, and developing ballplayers has traditionally been left to men, typically those who played the game at the highest levels. But a sea change in baseball has given rise to GMs without playing experience. Neither Boston Red Sox GM Theo Epstein  nor Texas Rangers GM Jon Daniels laced up cleats at the professional level. They are more academic than athletic. Ng believes that the advent of the Internet and the massive amount of readily available statistics and information has leveled the playing field for anyone—man or woman—to get involved with the game. No longer do you have to be an insider to get the inside scoop.

“She’s here because of how good she is and how hard she works,” says Dodgers GM Ned Colletti. 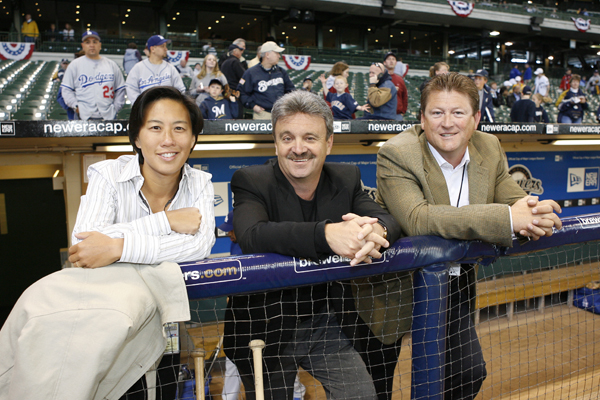 Her rise to the top could be attributed to the job she took in 1997 as director of waivers and records at the American League office in New York. What might have seemed an odd career move away from baseball operations proved to be just the stepping-stone Ng needed. At the league office, she approved all player transactions and contracts and helped American League general managers interpret and apply major league rules. The job afforded her tremendous opportunity to meet and network with baseball’s upper echelon. That’s how she met Yankees GM Brian Cashman, who hired her a year later, making her, at the time, the youngest assistant general manager in Major League Baseball. Under Cashman, she assumed a number of responsibilities, including handling the team’s arbitration cases.

Arbitration is an arcane process in which players whose contracts are up and who have at least three, but less than six, years of major league service time can take their team to a hearing to determine their salary. In that hearing, a panel must choose either the player’s figure or the team’s figure, with no wiggle room in between. Consequently, it behooves both parties to reach a compromise agreement before the case goes to a hearing.

Placing a dollar figure on a human being is not an exact science. While a player’s stats can be compared to others playing the same position with the same number of years of service, other factors play into the equation; leadership skills, personality, and attitude should also be considered according to Ng. “I think the intangibles play a big role in whether we want a guy. You never want a bad guy in your clubhouse,” she says.  The Yankees, she notes, wanted very team-oriented players who took care of themselves and handled issues in the clubhouse, thereby making the manager’s job easier. “Statistics can tell a story, but they can also lead you down the wrong path,” says Ng. “I think that the differences between what you see visually and what you see on paper is very interesting. It makes you look at the game differently.”

Ng’s uncanny talent for evaluating a player’s worth and affixing an appropriate price tag led her to successfully negotiate the contracts of Derek Jeter, Mariano Rivera, and Paul O’Neill, among others, which helped build a team that won three championships. During her four seasons with the Yankees, the team advanced to the World Series four times, winning the World Championship three times.

Ng cites being a part of the 1998 Yankees, who won 114 regular-season games en route to a World Championship, as one of her all-time greatest career moments. “That team embodied a lot of ideals that I believe in—strength in unity, team chemistry, and unselfishness. They were the sum of the parts,” says Ng. “That is one of the greatest things you get from sports, is understanding what you can achieve with people who have the same goal in mind. That team did not revolve around any one guy; it was a true team.”

In 2002 her former White Sox mentor Dan Evans, then Dodgers GM, lured Ng away from the Yankees to become his deputy as the Dodgers’ vice president and assistant general manager. Again, handling arbitration cases has been her forte. In nine winters of handling all arbitration cases for the Dodgers, she has gone to a hearing with just two players: National League Cy Young Award winner Eric Gagne in 2004, and reliever Joe Beimel in 2007. Ng won both cases.

Facing a daunting list of nine potential arbitration cases in 2010—including four former All-Stars, two Gold Glove winners, and two players who finished in the top 10 in the NL Most Valuable Player voting in 2009—Ng reached amicable agreements with all nine players, all before the deadline for teams and players to exchange salary figures. Although three of those players were given two-year deals, Ng signed all nine players for a total of $31.95 million in 2010 salary.

“She’s one of the best around,” says Colletti. “[Handling the 2010 arbitration cases] was a monstrous task and she came out of it and put the organization in a very good position. It was the best job I’ve ever seen anyone do.”

Prior to the 2011 season, Ng successfully avoided arbitration and signed all three eligible players—Chad Billingsley, Hong-Chih Kuo, and James Loney.

In addition to handling arbitration cases, Ng’s duties include negotiating free agent contracts, conducting trade talks, overseeing pro scouting—the department that compiles the information Colletti uses to make decisions on trades or free agent signings—and running Campo Las Palmas, the Dodgers’ academy in the Dominican Republic. During the season, a typical day for Ng includes getting an update on the organization’s minor league teams, dealing with transactions ( placing a player on the disabled list, calling up a replacement, etc.), and making calls to player agents. The rest of the time is spent evaluating players. As she watches from the stands, any number of questions might go through Ng’s mind: What does the club need? How can this player improve? How do these players fit into the future?

In 2011, Ng entered her 20th year—12 as an assistant GM—in professional baseball. Her peers say she has paid her dues and has done everything to prove that she is capable of leading a major league team. Still, she keeps getting passed over for the top job— the Dodgers in 2005, the Mariners in 2008 and, most recently, the Padres in 2009.

Still, Ng, 42, does not like to dwell on the fact that she is a rare breed among the rarified baseball elite. She is only one of two women—Jean Afterman who succeeded Ng at the New York Yankees is the other— who currently hold the title of assistant GM, the highest baseball operations position ever held by a woman. What’s more, there is no other female within striking distance.

“You have to be persistent to break into this game, and you have to be really good to stay in this game,” says Ng. “That takes a daily level of commitment.”

Ng’s colleagues say that it’s just a matter of time before she gets tapped for the top job.

“As I told her [after the Padres interview]: ‘This is no longer up to you. You’re prepared. You just need the opportunity and someone to believe in you and give you a chance,’” says Colletti. “It’s beyond her control at this point. She’s done everything she can to put herself in that position. She deserves the opportunity and it will take someone willing to give her the opportunity to make it happen.”

SHERRI ENG is a lifelong San Franciscan and diehard Giants fan. She has written for “Giants” magazine since 1996—her first article being a profile on Barry Bonds. She was the Giants’ editorial coordinator 1999–2000 and had the once-in-a-lifetime experience of helping the team move from Candlestick Park to AT&T Park (formerly Pacific Bell Park)—a momentous event that she never thought would happen considering the team’s impending move to Florida in 1992. She considers the Giants’ winning of the 2010 World Series a dream come true. Over the years, she has grown to like that other baseball team across the Bay and now follows and writes about the Oakland A’s.

The information for this article came primarily from the author’s interviews with Ned Colletti, Dan Evans, and Kim Ng.