This article was written by Keith Carlson

This article was published in the The National Pastime (Volume 27, 2007)

Consider the following list: Nap Lajoie, Rogers Hornsby, George Sisler, Ty Cobb, Joe Jackson, Ted Williams, Harry Heilmann, Bill Terry, Don Padgett. The first eight names are familiar, and all except Jackson are enshrined in the Hall of Fame. Who, though, is the ninth player, and why is he on the list? Answer: The list is all the major league players since 1901 who batted .399 or better in a season, with at least 150 at-bats.

Admittedly, the list is contrived, but the question is why is Don Padgett is on the list at all. He had his big year in 1939 with the St. Louis Cardinals and had one at-bat too many to have a .400 average, finishing with .39914.

He is obviously overlooked in the annals of baseball history because he had only 233 at-bats. All the others on the list had at least 456 at-bats (that was Williams in 1941, with 147 walks) in their .400 seasons.

The question of course is why did an “almost .400 hit­ter” have only 233 at-bats and play in only 92 games? Was he injured? Was he feuding with the manager? Was there some other explanation? Was it just a fluke?

The accompanying table shows Padgett’s batting average during the 1939 season. (An Excel chart with his cumulative batting average is available on request.) Obviously, small samples introduce considerable volatil­ ity in batting average, but four periods might shed light on the mysteries underlying his performance.

Of the team’s first 29 games, Padgett played in only eight and did not start in any one of them and did not play in 21. He was considered a pinch-hitter or a backup first baseman, although he appeared as a late-inning sub in only one game during this first period. With Johnny Mize firmly entrenched at first base, Padgett saw little action at that position.

Padgett came up to the Cardinals in 1937 as a comer outfielder after hitting .329 for Columbus (Triple A) in 1936. He played mostly right field, with stalwarts Joe Medwick and Terry Moore the regulars in left and center. He hit .314 in 123 games in his rookie year. This perform­ance would seem to guarantee regular status in 1938.

Slaughter could play all outfield positions, but Padgett was limited, apparently because he was “big and slow.” (He was 6′,190 pounds, did not steal a base in 1938, and grounded into 12 double plays in 388 at-bats.) As a result, he was tried at first base and catcher, both new positions to him.

Going into the 1939 season, it was clear manager Ray Blades preferred to go with Slaughter in the outfield, Mize at first, and an experienced Mickey Owen estab­lished as the starting catcher, Padgett was left out.

Because there was really no regular position for a defensively challenged player like Padgett, he was rele­gated to pinch-hitting duties and occasional late-inning substitutions at first or catcher. Another factor working against him early in the season was a dislocated shoulder suffered in spring training, setting him back almost a month.

Furthermore, the team was doing well with Owen catching, winning 20 of 29 games. With limited appear­ances, Padgett was unimpressive in the first month-plus of the season.

In the first 16 games of this period, Padgett went 3-for-8 as a pinch-hitter. He had a couple of RBIs.

On June l O and 11, the team played doubleheaders both days. After losing both games to Philadelphia on June 10, Padgett got a start at catcher in the first game on June 11. He went 2-for-4 in that game, with two RBIs, and, as a substitute for Mize late in the second game, hit a triple with the bases loaded, winning the game.

Although he did not start the next two games, he was l -for-2, either pinch-hitting or subbing. He then was started at catcher the next three games, going 7-for-l 0, with five RBIs and two home runs.

As a result, during this 25-game period Padgett went l 5-for-26, batting .577 and boosting his average from .125 to .471. Unfortunately, this hot streak did not translate into a winning record for the team-11 wins and 14 losses.

After this remarkable performance, it appears man­ager Blades began a partial platoon of Padgett with Owen at catcher, because Padgett batted left and Owen right. From June 24 to July 30 (36games), Padgett started 20 games, and all were against right-handed pitchers (in fact’ of his 56 starts all season, only one was against a left-handed pitcher).

He continued his strong hitting with a .434 average during this two-month period, although his average dropped slightly from .471 to .446. On July 30, in a home game against Brooklyn, he twisted his ankle rounding first on a single, but hit a home run later. This put him out of action as a starter for the next 13 games, but he did pinch-hit three times.

For the final month-plus of the season Padgett hit a more pedestrian .315. After the August 28 game, an unspecified illness sapped his strength, limiting him to occasional pinch-hitting duties, without any hits, through September 8.

After returning to action as starting catcher on September 9, he warmed up with 21 hits in his next 50 at-bats. This takes us to September 24, after which he got only two hits in 13 at-bats during the last eight games of the season.

He was hitting .414 as of September 23, but slipped to .399 by September 28, the day the Reds clinched the pennant by beating the Cardinals, 5-3. Padgett did not play in either game of the doubleheader in Chicago on September 30 (Larry French, a left-hander, started the first game, and Bill Lee, a 19-game-winning right-hander started the second).

In the last game of the season on October 1, however, he was sent in as a pinch-hitter with the score tied in the eighth inning. According to John Snyder, Cardinals Journal (Emmis Books, 2006):

… Padgett lined a clean single up the middle, but upon reaching first base learned that the first-base umpire had called time a split second before the pitch because a ball rolled loose in the bullpen. Padgett returned to the plate and drew a walk in what proved to be his last plate ap­pearance to finish the season with an average of .39914. Had the hit stood, his season batting average would have been .402.

The year 1939 was a remarkable one for Don Padgett, and quite a successful one for the Cardinals, as they finished second behind the Reds in the pennant race. We don’t know all of the thinking about whether or not to play him.

Clearly, the manager was often confronted with the dilemma of when and where to play him, because the positions he could possibly play were filled with capable players, in particular, Slaughter, Medwick, Mize, and Owen. His catching numbers did not appear to be unusu­ally bad. He had a fielding average of .978, while Owen fielded .983 (and batted .259). It was hard to keep Padgett’s bat out of the lineup, but obviously, the man­ager liked having the experienced Owen behind the plate. Padgett’s playing time was affected by a pinch-hitting role during the first 45 games of the season, as well as 13 games during the summer because of an ankle injury and an illness in late August and early September. It isn’t clear whether anyone was aware of his flirtation with.400 during the last three games of the season, after the Reds had clinched the pennant—or even cared. Mize’s big year seemed to attract most of the attention.

The rest of Padgett’s career—all of which was spent in the National League—was less than stellar, however, suggesting .399was a bit of a “fluke,” and was achieved mainly by facing right-handed pitching.

KEITH CARLSON is retired and lives in Bridgeton, Missouri. A member of SABR since 1984, he is a lifelong Cardinal fan. 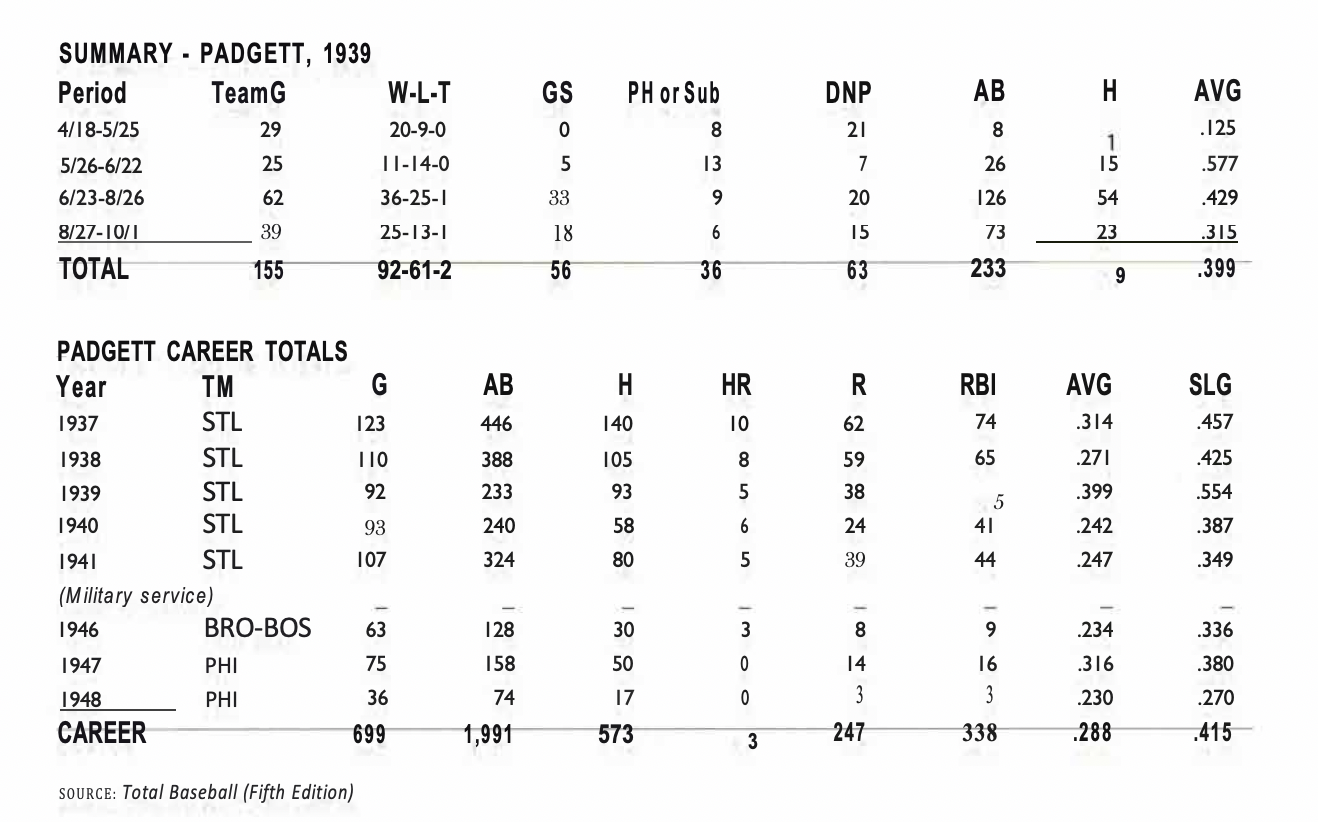 This essay originated from conversations with David Stephan, a specialist in the analysis of lost playing time among major-leaguers, and also benefited from his comments. Matt Rickard also provided editorial comments. All the contents, however, including any errors, are solely my responsibility.

Almost all of the information assembled here came from Retrosheet.org and ProQuest at SABR.org (New York Times and Washington Post). Some additional information was gathered from the St. Louis Globe Democrat, and Dave Martin checked selected issues of The Sporting News. Padgett’s daily log (an Excel spread­sheet) is available on request from the author.