This article was written by Steve Gietschier

At the time of his death in May 1969, LEE ALLEN had been the historian at the Hall of Fame for ten years. Celebrated for his encyclopedic recall of baseball persons famous and obscure, and events large and small, he was a prolific writer whose books and articles marked him as the foremost baseball historian of his time. 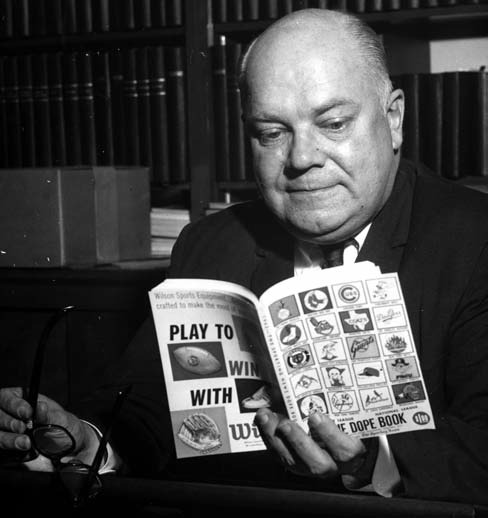 Born in 1915 in Cincinnati, Allen saw his first Reds game while still in knee pants. In high school, he went to the ballpark nearly every day, sitting in the upper deck. Readers of Jack Ryder’s newspaper column soon noticed an exact tally of the balls and strikes each pitcher had thrown. Ryder was a good reporter, but Allen supplied the data.

He went to Kenyon College and the Columbia School of Journalism. After little more than one semester, he joined the Reds as an assistant to Gabe Paul, the team’s publicity director and road secretary. When the United States entered the Second World War, Allen took a civilian post with the navy in Alaska. After a year or so, he returned to Cincinnati to replace Paul, who had been called to the service.

All the while, Allen was accumulating an outstanding collection of baseball books, manuscripts, and notes. He began to build a career as a researcher, putting in stints for two Cincinnati newspapers, appearing on radio and television and working for The Sporting News.

Breaking into print for profit requires not only talent but luck. While working for the Reds, he saw that G. P. Putnam’s Sons had begun publishing its series of club histories. He wrote to them cold, and Putnam told him to take a stab at the Reds book.

That book, The Cincinnati Reds (1948), led in turn to 100 Years of Baseball and The Hot Stove League (1955), a collection of unusual research and anecdotes, many of which have been anthologized. These books established Allen as an expert.

In early 1959, the Hall of Fame announced that Allen would replace retiring Ernest J. Lanigan as historian. Allen brought to Cooperstown not only his knowledge and research skills but also a vast baseball library, weighing 5,000 pounds. His workdays soon stretched to twelve hours, seven days a week. Allen’s major effort was collecting biographical data on the 11,000 men he estimated had played in the major leagues. This task grew into the first edition of The Baseball Encyclopedia (1969).

Allen did not sit on his research. He turned it into a long list of articles, speeches to dozens of groups, and a series of renowned books, including The National League Story, The Official History (1961) and its companion, The American League Story (1962). He also wrote “Cooperstown Corner,” a column in The Sporting News from April 1962 to May 1969.

To help professional baseball celebrate its centennial, he journeyed back to his hometown in May to honor Cincinnati’s players. Driving back to Cooperstown, he stopped in Syracuse, complaining of chest pains. Two hours later he was dead of a massive heart attack.

Note: This piece is adapted from the author’s introduction to Cooperstown Corner: Columns from The Sporting News, 1962–1969 (University of Nebraska Press, 1990). The original is available online at the Baseball Biography Project.