This article was written by Bill Carle

PETER MORRIS was born in 1962 in Birmingham, England, and grew up in Toronto, Canada. Both of his parents, who earned doctorates in sociology, are prolific authors. Morris graduated from the University of Toronto with a degree in English. He mastered the game of Scrabble and was world Scrabble champion in 1989. He enrolled in graduate school at Michigan State University and went on to earn a master’s degree in English. With this sort of pedigree, it was only natural that Morris would become a writer. 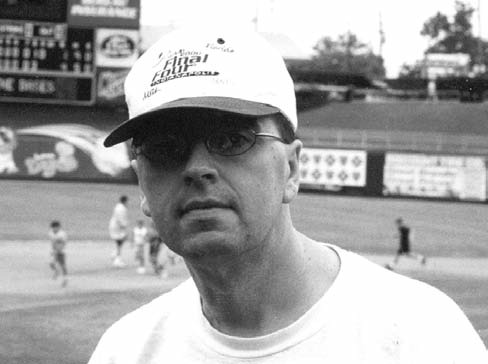 In the mid-1980s, Morris joined the Society for American Baseball Research, and his fascination with the history of early baseball grew. He was especially interested in how it evolved from the primitive game of the mid-nineteenth century to what it is today. His interest in Michigan baseball in particular led to research in Michigan baseball during the era 1840–75. This effort led to his first book, Baseball Fever: Early Baseball in Michigan (2003), which in 2004 won the Seymour Medal for the best book on baseball history.

Baseball Fever’s success spurred an even more ambitious project, the two-volume work A Game of Inches: The Stories Behind the Innovations That Shaped Baseball (2006). Virtually every question any fan would have about the development of the game is answered in this book. Meticulously researched and wonderfully written, A Game of Inches answers questions about the origins of, for example, the hidden-ball trick, the rally cap, turnstiles, and every trick pitch that has ever been tried in a major-league game. Winner of the Seymour Medal as well as the Casey Award for the best baseball book of 2006, A Game of Inches was groundbreaking.

Morris’s next undertaking, Level Playing Fields: How the Groundskeeping Murphy Brothers Shaped Baseball (2007), is an engrossing book about two baseball-playing brothers of the 1880s who became major-league groundskeepers, one in Baltimore, the other in New York. These two men were pioneers— forgotten pioneers, until Morris’s book—in the business of preparing the field according to standards that are now common. But Didn’t We Have Fun? An Informal History of Baseball’s Pioneer Era, 1843–1870 (2008) is essentially an oral history. Morris researched scores of interviews of the men who actually played in the midnineteenth century. In his most recent book, Catcher: How the Man Behind the Plate Became an American Folk Hero (2009), he traces the history of the men who wore the tools of ignorance from the 1840s to the present day. Another groundbreaking work, it is a close look at a defensive position sometimes neglected by baseball historians.

Morris is an expert at tracking missing ballplayers of the past. He has managed to find Eddie Kolb, a pitcher who gave up 19 runs in his only major-league appearance; Ed Clark, who fought in the Spanish– American War and is buried in Arlington National Cemetery; George Bristow, whose real name was not Bristow but Howlett; and Harvey Watkins, manager of the New York Giants in 1895, who later became manager of the Barnum and Bailey Circus.

His five monumental works have firmly established Peter Morris as one of the giants among baseball historians.