The highly regarded “five-tool” label is a relatively modern term in baseball’s lexicon, usually traced to Leo Durocher proclaiming the greatness of his star player of the early 1950s, Willie Mays.[fn]Lou Smith, “Lou Smith’s Notes,” The Cincinnati Enquirer, June 6, 1954. See also: Jean Hoffman, “Durocher People’s Choice to Manage Giants,” The Los Angeles Times, July 19, 1960.[/fn] The five tools are: hit for average, hit with power, run with speed and prowess (particularly on the basepaths), catch the ball, and throw the ball (with accuracy and high velocity). Sports Illustrated called Mays “the prototypical five-tool player,” i.e., the first or original.[fn]Bill Syken, “Alltime Best,” Sports Illustrated, November 24, 2003.[/fn] Assuredly, however, each of these five diamond skills has been important since day one of major league baseball—and therefore it does not seem unreasonable that there could have been five-tool players who preceded the Say Hey Kid. This article describes the results of my effort to objectively investigate this matter. 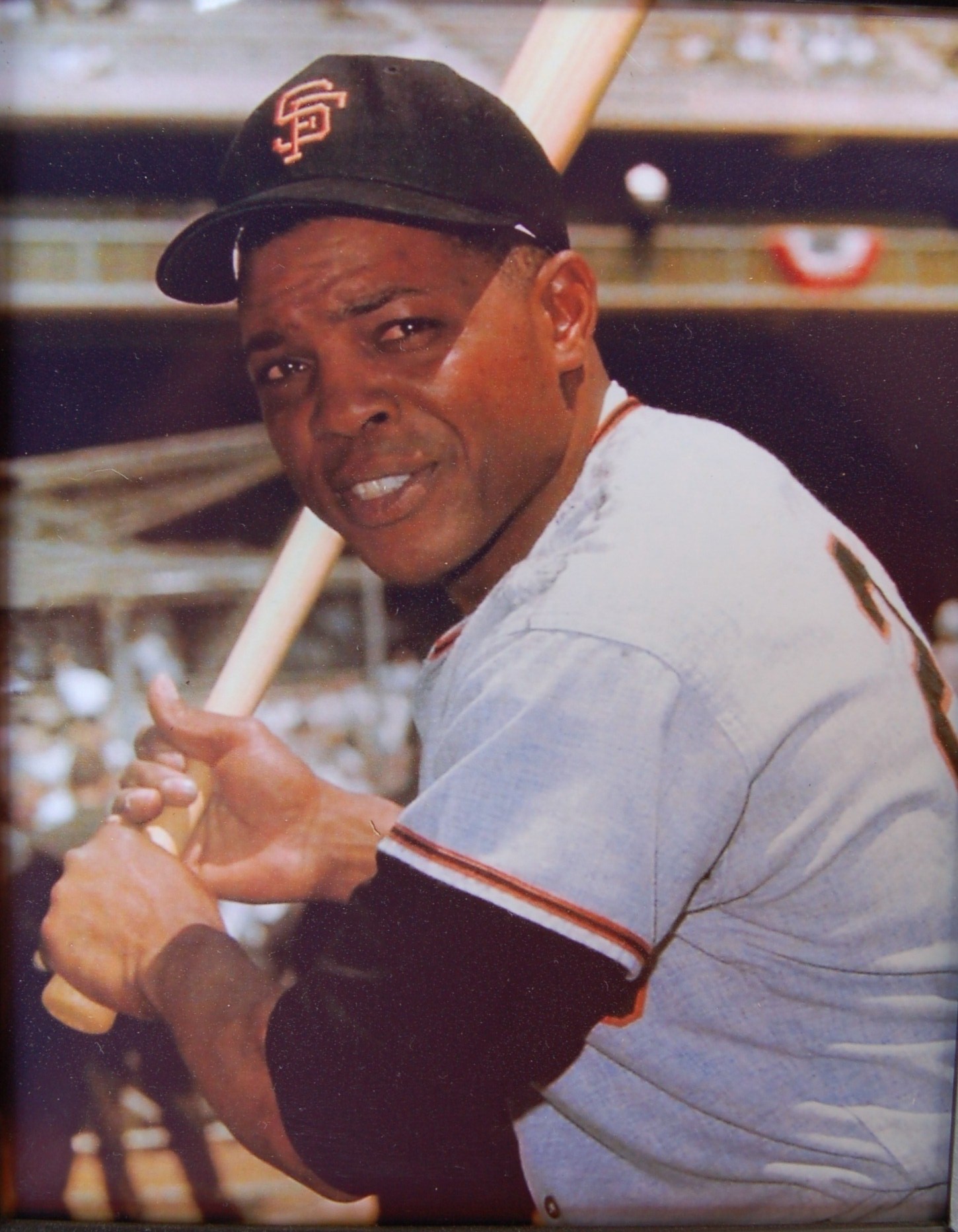 The connotation of the “five-tool player” term is sustained outstanding performance in each of the five talents. Since “outstanding performance” does not necessarily mean “the best performance,” I decided to zero in on those players who achieved multiple top-five rankings in each of the metrics employed to evaluate relative performance in each of the five tools.[fn]The Appendix provides complete details with regard to the requirements to qualify for a top-five ranking in the BA, OBP, SLG, ISO, and SBP metrics (and for a top-two ranking in the fielding metrics).[/fn] For the domain of players in this study, I chose all Hall of Fame players (except pitchers) whose major-league careers commenced before Mays began his 22-year National League career (May 25, 1951, through 1973, with 1953 missed because of military service). Thus, all the Hall of Famers from Cap Anson (1876–97) through Mickey Mantle (April 17, 1951, through 1968) are included.

For additional comparison, those Hall of Famers who began their big-league careers within a few years after Mays’s debut and were contemporaries of Mays for at least 15 years are also included. Thus, players such as fellow outfielders Al Kaline (1953–74), Hank Aaron (1954–76), Roberto Clemente (1955–72), and Frank Robinson (1956–76) are also included. Altogether, the domain consists of 116 players. Using the Spalding, Reach, and Sporting News baseball guides, the baseball encyclopedias utilizing Pete Palmer’s database of baseball statistics—i.e., Total Baseball (Thorn and Palmer) and The ESPN Baseball Encyclopedia (Gillette and Palmer)—and the Baseball-Reference.com and Retrosheet websites, I ascertained the number of times a player excelled in each of the five tools. From this information, I was able to construct tables (organized according to the principal fielding position of each player) that summarize on a career basis the five-tool accomplishments of each player.[fn]Baseball America and the Baseball Hall of Fame, The National Baseball Hall of Fame Almanac (Durham, North Carolina: Baseball America, 2017).[/fn] These tables are provided in the Appendix, which is available on the SABR website.

The “hit for average” tool is a vital skill because it indicates how proficiently a player gets on base (via base hits), the first requirement for the main offense objective, scoring runs. However, after nearly a century of relying solely on batting average (BA) to gauge a player’s ability to get on base, the importance of measuring a player’s skill in getting on base via walks (and by being hit by pitched balls) became appreciated as a valuable strategy and on-base average (OBA) emerged—thanks to the innovative research and statistical analysis of Allan Roth, coupled with the input and strong endorsement of Branch Rickey.[fn]Branch Rickey, “Goodby to Some Old Baseball Ideas,” Life, August 2, 1954.[/fn]

Indeed, on-base average, or on-base percentage (OBP), as it’s often called, is now generally regarded to be more useful than the traditional BA. Therefore, in my evaluation of a player’s performance for the “hit for average” tool I utilized both the classic BA and the relatively modern OBP. Continuing, the “hit with power” tool demonstrates how well a player enhances the advancement of both himself and any teammates already on base around the basepaths to home plate—the ultimate goal—with extra-base hits. To assess a player’s ability to hit with power I utilized two metrics: the classic slugging average (SLG) and the modern isolated power (ISO).[fn]The present-day definition of isolated power (ISO) is “slugging percentage minus batting average,” which can be expressed equivalently as: ISO = (SLG – BA) = (D + 2T + 3HR)/AB which is identical to the formula for extra base power developed in the 1950s by Branch Rickey and Allan Roth; see Note 5.[/fn] With that introduction, let’s first focus on those players who excelled in BA, OBP, SLG, and ISO.

During his journey to Cooperstown, Mays achieved the following yearly top-five performances:

This impressive record was deemed to be the threshold for a player to be considered as a five-tool player prior to Mays. That is, a player had to at least come reasonably close to Mays’s accomplishments. Table 1, culled from the tables in the Appendix, presents a list of those players who qualified in these four statistical departments, the qualification requirements being (a) at least six top fives in BA or eight top fives in OBP and (b) at least 12 top fives in SLG or at least 10 top fives in ISO. Table 1 also provides information on the base stealing performance achieved by these players (discussed below). Also included in Table 1, irrespective of their record, are the 11 Hall of Famers who played primarily for the Pittsburgh Pirates: center fielders Lloyd Waner and Max Carey; right fielders Roberto Clemente and Paul Waner; left fielders Willie Stargell, Ralph Kiner, and Fred Clarke; second baseman Bill Mazeroski; third baseman Pie Traynor; and shortstops Arky Vaughan and Honus Wagner.

Let’s now address the running tool, which manifests itself in both offense and defense: Speed and effectiveness in running give the player an advantage to beat out scratch hits, take extra bases, and steal bases while his team is batting and to run down flyballs hit to the outfield gaps or reach grounders hit to the infield holes while his team is in the field. Probably the most expedient metric for assessing a player’s running speed is his base-stealing performance. Three different metrics have been employed to evaluate base-stealing: (1) stolen bases (SB), which were first recorded officially in 1886; (2) base-stealing runs (BSR); and (3) stolen-base percentage (SBP).[fn]John Thorn & Pete Palmer, The Hidden Game of Baseball (New York: Doubleday, 1984). Base stealing runs (BSR), also called stolen base runs (SBR), was devised by Palmer and used in The Hidden Game of Baseball.

In emails between Palmer and Krabbenhoft February 7 and 9, 2018, Palmer wrote, “Another way of doing it would be to rank players on SB minus 2 x CS. A stolen base is worth about .22 runs and a caught stealing is minus .35 runs, which works out to a 63% success rate to break even. So, SBR = .22 x SB – .35 x CS. Using 2 to 1 is an approximation which makes the calculation easier. The run values are based on the change in expected runs to be scored before and after the event.” It is pointed out in emails February 7 and 9, 2018, between Bill Deane and Krabbenhoft that an analogous metric, adjusted stolen bases (ASB), was concocted by Deane “around 1983, before Hidden Game came out.” The formula for ASB is: ASB = SB – 2(CS). Finally, the formula for stolen base percentage is: SBP = 100 X SB/(SB + CS).[/fn]

The BSR and SBP metrics utilize caught stealing (CS) numbers, which regrettably are not available officially for all seasons. For the American League, CS stats are available for only 1914–16 and 1920 forward; for the National League, CS stats are available for only 1913, 1915–16, 1920–25, and 1951 forward. Thanks, however, to the phenomenal efforts of the volunteers who contribute to the Retrosheet database of baseball information, unofficial CS statistics are available for the 1926–50 NL seasons (although these CS stats may not be complete for all players since game play-by-play accounts have not yet been ascertained for all teams and all seasons from 1926 through 1940). Inspection of Table 1 reveals that of the 14 players (besides Mays) with excellent performance records in both “hitting for average” and “hitting with power,” only six produced base-stealing stats at least reasonably in line with those achieved by the Say Hey Kid: center fielders Mantle, Speaker, and Cobb, right fielders Robinson and Aaron, and shortstop Wagner.

With Mantle, Robinson, and Aaron being contemporaries of Mays, only Speaker, Cobb, and Wagner remain as possibilities for being the genuine prototypical five-tooler, depending on how each stacks up with Mays in the two fielding tools.

For the two fielding tools, I have utilized two sets of fielding metrics to evaluate a player’s performance:

1. The classic metrics of putouts-per-game (PO/G) for catching the ball and assists-per-game (A/G) for throwing it; in addition, the traditional fielding average (FA) was also included in the evaluation. These metrics were used only for the outfielders and the shortstops.

Because only one player at most can qualify for a fielding title for each position from each team, I tightened the ranking requirement from a top five to a top two. The pertinent fielding information for Mays, Speaker, Cobb, and Wagner is provided in Table 2.

It is worth noting that comparing the relative fielding performances of center fielder Mays with shortstop Wagner is an apples and oranges situation. Another modern analytical technique for assessing relative fielding performance is Defensive Regression Analysis (DRA), developed by Michael Humphreys.[fn]Michael A. Humphreys, Wizardry: Baseball’s All-Time Greatest Fielders Revealed (New York: Oxford University Press, 2011).[/fn] According to Humphreys, the top center fielder of all time is Andruw Jones, followed by Mays, Speaker, Paul Blair, Gary Pettis, and Richie Ashburn. No other Hall of Famers were included in Humphreys’ “Top Forty Center Fielders of All Time.” At the shortstop position, Humphreys came up with Mark Belanger as number one, followed by Rey Sanchez, Ozzie Smith, and Joe Tinker. Wagner did not make Humphreys’ list. “Honus was only a solid-to-good, not great, fielder at shortstop,” Humphreys wrote. “He was clearly among the better-fielding shortstops of his time, just not an all-time great.”

Bill James, though, in his New Historical Baseball Abstract, wrote, “Wagner was among the greatest defensive players in the history of baseball.” James’s top five defensive shortstops of all time were, in order, Wagner, Smith, Bill Dahlen, Rabbit Maranville, and Pee Wee Reese. James adds that this list “includes Win Shares earned at other positions, as well as shortstop; if you base the rankings only on Defensive Win Shares at shortstop, Ozzie is first.”[fn]Bill James, The New Bill James Historical Baseball Abstract (New York: Free Press, 2001).[/fn]

Based on the information collected in Tables 1 and 2, it’s reasonable to consider Speaker, Cobb, and Wagner to have been true five-tool players. Therefore, based on the facts and figures assembled in this report, Willie Mays may not be the prototypical (i.e., original) five-tooler, as claimed in Sports Illustrated. It appears that The Grey Eagle, The Georgia Peach, and (perhaps) The Flying Dutchman may have preceded The Say Hey Kid. Being recognized as “the ultimate five-tool player” is part of the legacy of Willie Mays.[fn]Matt Doeden, Willie Mays (Minneapolis: Twenty-First Century Books, 2011).[/fn] But he wasn’t the first.

HERM KRABBENHOFT, a SABR member since 1981, is a retired organic chemist. He is a lifelong fan of the Detroit Tigers. His baseball research endeavors have included ultimate grand slam homers, leadoff batters, quasi-cycles, and ascertaining accurate records for runs scored and runs batted in by players of the Deadball Era.

It is a pleasure to express my tremendous gratitude to Bill Deane, Gary Gillette, and Pete Palmer for the input and guidance they provided to me. I should also like to thank the following people for their very valuable help in providing me with important information (including scans of articles) on the origin and use of the “five-tool” term: Bruce Berger, Adrian Fung, Chuck Hildebrandt, Wayne McElreavy, Rod Nelson, Dave Newman, Cliff Otto, and Dennis VanLangen.