This article was written by Walter Dunn Tucker

Recently a friend recalled the first major league game that he ever saw, in which Joe Grace of the St. Louis Browns hit a home run off Dutch Leonard of the Washington Senators in Griffith Stadium. I saw my first major league game there, too, in 1947. Grace, playing outfield for the Senators that day, caught a long fly ball hit by Joe DiMaggio near the leftfield bleacher wall, 405 feet from home plate. In my mind’s eye I can still see Joe D on the way to second base, kicking the infield dirt, when he realized that Grace had hauled in his mighty smash.

Wanting to know more about Joe Grace, particularly how long he played, I went to two of my reference books, the ESPN 2007 Baseball Encyclopedia and the 1947 edition of Who’s Who in Baseball. The former listed his date of birth as January 5, 1914. Who’s Who, published when Grace was still an active player, showed his year of birth as 1915.

This led me to thinking about other ballplayers who showed age discrepancies in record books published during their playing days and in modern baseball reference books. The table that follows lists birth dates from playing days found either in the Sporting News Baseball Register (indicated by R) or Who’s Who in Baseball (indicated by W) and compares those dates with those listed in the 2007 ESPN Baseball Encyclopedia. Players listed in the table are from the 1930s through the 1950s with age discrepancies of two to seven years. I focused on those seasons because those were my “growing up” years when I could concentrate on baseball without having to focus on a career. There are so many one-year discrepancies that it might take this entire journal to include them. There may well be other major leaguers who should be included.

The undisputed champion of age discrepancies with seven years is Bill Morrell, who pitched for the Washington Senators in 1926 and the New York Giants in 1930 and 1931. In case you’re wondering how I knew about a player whose last big league season was the year of my birth (during game three of the World Series, won by the Cardinals over the A’s, 5-2), the answer is I didn’t. Morrell’s name and information about him came from Dick Thornton via Jim Charlton. Not having a Who’s Who or a Baseball Register for those years, I used his date of birth shown in the 1969 Baseball Encyclopedia, published by the MacMillan Company.

After Morrell, the biggest discrepancy was six years, achieved by Bingo Binks, Bob Boyd, Luke Easter, and Bob Thurman. Easter’s age difference first came to my attention a few years ago when a sports page article gave his age as older than what I remembered from my record books published during his major league playing days. The 1950 Baseball Register showed a birth year of 1921; ESPN shows 1915! Easter was remarkable. In four consecutive seasons after leaving the major leagues, 1955 through 1958, he hit 143 home runs and drove in 545 runs. He hit over .300 two of those years and had a batting average of .294. He celebrated his 40th birthday in the first of those successful seasons and would have turned 49 in his 1964 season with the Rochester Red Wings. In his 11 minor league seasons after leaving the big show, Easter slugged 238 home runs.

If the ages listed in contemporary record books were correct, three major leaguers would have been playing in the minor leagues at very tender ages. Dick Siebert, one of the top five American League batters in 1941, played a few games in 1929 for Waynesboro of the Blue Ridge League at the alleged age of 15. Omar “Turk” Lown celebrated his purported 16th birthday May 30, 1942, a year in which he went 18-8 for Valdosta of the Georgia-Florida League. In a telephone interview Lown said he couldn’t recall any age discrepancy. His 1926 birth year, shown in the 1952 Baseball Register, was changed to 1924 in the 1953 Register. Jack Merson, according to contemporary record books, was 16 on January 17, 1940. He played 12 games at second base for Newport of the Appalachian League that year. By ESPN Encyclopedia records, each of these players was really two years older than their playing-day record books indicated.

There must have been a post-World War II tradition for Braves center fielders to understate their ages. Both Sam Jethroe (Boston 1950-1952) and Bill Bruton (Milwaukee 1953-1960) were four years older than the record books of their playing days indicated.

Most players showed the same month and day of the month, changing only the year of birth. Several, however, showed different days and months. Not surprisingly, one of these was Satchel Paige, whose birth date was listed in the 1952 Baseball Register as September 22, 1908. The Sporting News Hall of Fame Fact Book, published in 1982, shows July 6, 1905. The 2007 ESPN Baseball Encyclopedia lists July 6, 1906, which is what was used in the accompanying table. Satch once asked, “How old would you be if you didn’t know how old you were?” His irrelevant age permitted him to win 10 games or more for Miami of the International League in three consecutive seasons, 1956-58, when he would have been at least 50 years old. He and Luke Easter would have been the ancient mariners facing each other in those International League seasons.

The playing-days’ age understatements may have been caused by the players wanting front offices of major league teams to think that they were younger than they really were. In a telephone interview, George Zuverink said that a scout suggested to him that he shave a couple of years off his age. Zuverink began his pro baseball career in 1946, a year of intense competition for pro positions, with hundreds of players coming out of the armed forces and returning to the game. The 1945 edition of Who’s Who showed the cumulative career major league statistics for 121 players whose year-by-year records had been shown in either the 1943 or 1944 editions. Eighteen of those listed came back for part of the 1945 season. These were just about offset by 21 players who played in 1944 and went into the service for the 1945 season. There were 42 minor leagues in 1946.

A particularly interesting situation involves brothers Ed and Hank Sauer. Hank’s age was understated by two years, with 1919 as his birth year during playing days, possibly making him Ed’s younger brother. Hank is shown, correctly, as born in 1917 in ESPN. Ed never played enough games to be included in Who’s Who, so it was difficult to check. Ed Hartig reports that the 1944 and 1945 “Cub News” listings of Ed Sauer’s age imply a birth year of 1920, while ESPN shows his year of birth as 1919. One has to wonder what the Sauer parents thought of this at the time their boys were big leaguers.

In a class by himself is Orestes “Minnie” Minoso, whose age was overstated by three years during his playing days and thus rates a special place in the table. 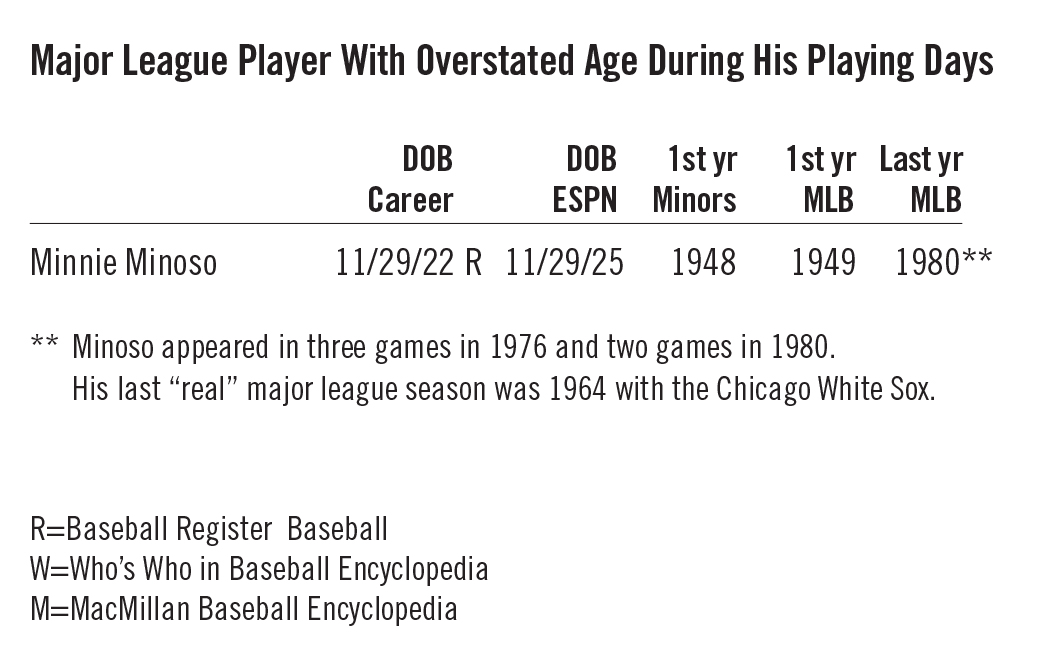 I am indebted to Jim Charlton, Bill Carle, Steve Gietschier, Ed Hartig, Norman MacLean, Pete Palmer, and Dick Thornton for their invaluable contributions and suggestions. They have made this a more accurate and, hopefully, a better article. Dick’s information was earth-shattering, enabling Bill Morrell to knock Binks, Boyd, Easter, and Thurman off their pedestal as age discrepancy champions.

Doing the research, recalling many familiar names, talking to a couple of former players, and exchanging e-mails with the men mentioned in the previous paragraph have been brought me much pleasure.