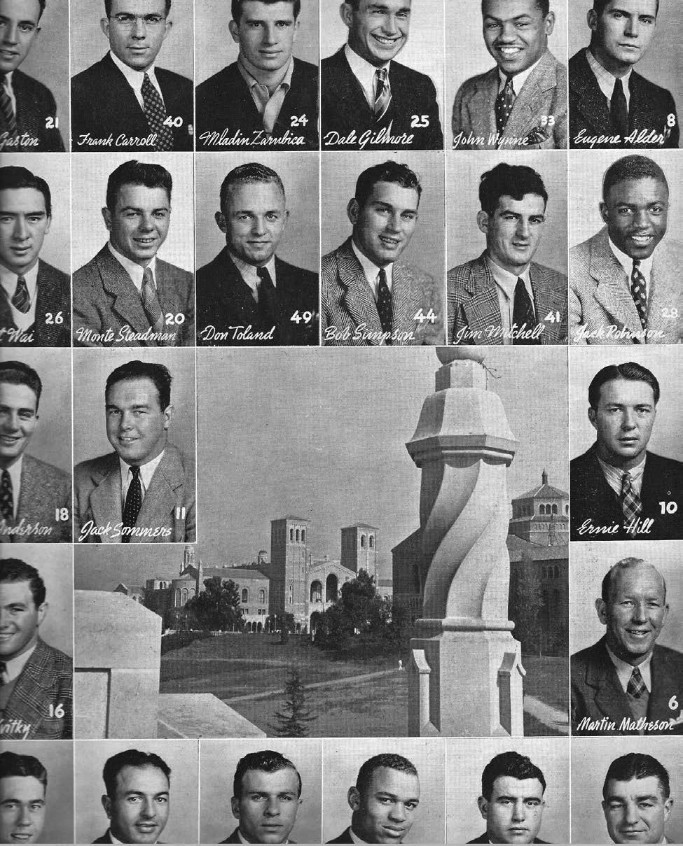 Organized Baseball’s euphemistic “gentlemen’s agreement” struck out on April 15, 1947, when 28-year-old African-American Jack Roosevelt Robinson took up a position at first base for the Dodgers at Ebbets Field in Brooklyn. Although much has been written about this milestone, another nearly as eventful event could have preceded it on January 1, 1940, at the Rose Bowl in Pasadena, California.

Before the 1950s, college football had its own whispered but understood “gentlemen’s agreement.” Although no published policy existed, segregation was regionally enforced. Football programs at Northern schools knew they could not use Black players in games with Southern schools. With few exceptions, the agreement was honored.1

A clear challenge to this racial-exclusion policy nearly made headlines based upon a game on December 9, 1939, in Los Angeles involving Robinson. The winner of this Pacific Coast Conference title football game between UCLA and the University of Southern California would be expected to play the second-ranked Tennessee Volunteers of the Southeastern Conference in the Rose Bowl. During the 1939 regular season, Tennessee became the last team in NCAA history to go undefeated, untied, and unscored upon.2

If UCLA could beat USC and earn a trip to the Rose Bowl, a star participant against Tennessee would be Robinson. The shredding of college football’s “gentlemen’s agreement” would precede the subsequent historic major-league baseball game in Brooklyn by more than seven years.

Jackie Robinson was UCLA’s first four-sport letterman (football, basketball, track, and baseball).3 In addition to these achievements, Robinson also excelled in tennis, handball, golf, rifle, badminton, and table tennis.4 It would be in football, however, that his name gained early national recognition. He was college football’s top ground gainer in average yards per carry in 1939. In addition, the speedy back averaged 20 yards per punt return. Sportswriters referred to him as “the Jim Thorpe of his race.”5

The 1939 gridiron season went well for both the UCLA Bruins and their crosstown rivals, the all-White Trojans of Southern California. UCLA used a version of single-wing football. Halfback Washington received the snap from center and Robinson, the other halfback positioned near the line of scrimmage, would shift into the backfield. This motion-based formation provided Washington with many options, including a handoff to the swift Robinson.6

The senior/junior backfield combo proved successful as Washington became the first UCLA player to be named an All-American (second team). The star would end up sixth in the voting for the Heisman Trophy. In the 1939 season, Washington led the nation in total rushing and passing yards with 1,370.7 His 1,915 career rushing yards remained a UCLA record for more than 30 years. The talented Robinson made a name for himself as an elusive runner.

UCLA entered the December 9 game against USC with a 6-0-3 record, having played to a tie against Stanford, Santa Clara, and Oregon State. Southern Cal at the time had a 7-0-1 record with a tie in their opening game against Oregon. While the Bruins had the nationally recognized Washington and Robinson, the Trojans squad included guard Harry “Blackjack” Smith, a first-team All-American, and third-team All-Americans in triple-threat quarterback Grenville Lansdell and right tackle Phil Gaspar.

The game between the two undefeated rivals was played in the Los Angeles Coliseum before 103,303 fans and a national audience tuning in to hear radio announcer Bill Stern. The contest proved to be a low scoring, defensive battle as the final game log would indicate.8

Although USC entered the game having the second most potent offense in the land, three good scoring opportunities were stymied by the stiff Bruins defense. USC even recovered a UCLA fumble at the UCLA 23-yard line only to have star quarterback Lansdell, on his way for a touchdown, fumble three yards from the goal line after a bruising hit by Bruin defensive back Robinson. As the Los Angeles Times wrote, “No man’s arm could have withstood that blow from Robinson’s body.”9 The fumbled ball bounced into the end zone where UCLA’s Strode recovered it for a touchback.

The outcome of the game would be decided on a nailbiting length-of-the-field drive by UCLA late in the fourth quarter. The Bruins were faced with a fourth down on the USC 4-yard line. The team huddled, and without input from coach Horrell, became indecisive on what to do next. Quarterback Ned Mathews made the critical decision. Mathews told his teammates, “Let’s go for it.” After receiving the snap, Washington rolled out for a scoring pass thrown into the corner of the end zone. A Trojan defensive back batted the ball away. The game ended minutes later in a 0-0 deadlock.

Robinson finished the contest with 23 yards gained in four carries and 48 yards on four punt returns. In a postgame report, Robert Wagoner of the United Press wrote that Robinson “turned in four runs of more than 15 yards each.” This included his pass receptions.10

What if Washington’s pass had been complete and the Bruins went on to win the December 9 game? The Rose Bowl invitation would have been offered to Tennessee as the preferred opponent to face the PCC champion Bruins. Would the all-White Volunteers have accepted knowing they would face a team with four African-American stars?

Clinton “Butch” McCord was a former Negro Leaguer who would reach the highest level in Organized Baseball’s minor leagues in the mid-1950s. He was a World War II Navy veteran and Tennessee native. According to McCord, Tennessee coach Robert Neyland had told the Rose Bowl officials that if UCLA won, Tennessee would not play.12 This stance was based upon the presence of Blacks, including Jackie Robinson, on the Bruins team.

In large print in the December 9 issue of the Tennessean was the headline:

U.T. MAY NOT ACCEPT BID IF UCLANS GET COAST HONOR

“However, if Tennessee and UCLA should win tomorrow, the latter could hardly help inviting the Vols, because all the other standout Eastern bowl candidates had committed themselves to other post-season classics or not to play any.”13

The Pasadena Star-News wrote that “an embarrassing” position could result. “The University of Tennessee Volunteers were unlikely to step on the field with black players as foes.”15

An African-American newspaper, the California Eagle, believed a UCLA-Tennessee game would have a transcending impact and “prove to this nation that its people can play together in the most approved manner as sportsmen, upholding as they do the democratic principles as outlined by the signing of the Declaration of Independence.”16

Robert Neyland, Tennessee’s coach, was a West Point graduate, World War I veteran, and retired brigadier general. Neyland had coached at Tennessee since being hired as an assistant in 1925. In a follow-up to what McCord had said, the author contacted the University of Tennessee’s longtime (1961-2000) sports information director Haywood Harris, a historian of University of Tennessee athletics. Of a possible Rose Bowl boycott by Tennessee, Harris said he was unaware of what McCord had stated earlier. He knew Coach Neyland and doubted the veracity of the threat.17 It was also rumored that Tennessee All-American running back George Cafego and his teammates had been polled about a Rose Bowl invitation and were “eager to meet the Far West Champions.”18

It is arguable, but also reasonable, to assume Tennessee would have played in the January 1, 1940, Rose Bowl against UCLA.

Had Tennessee played against UCLA, the existing Southern ban would have been broken. Just as Robinson had been a key factor during the season and in the December 9 game, he undoubtedly would have played a major role in the outcome of the Rose Bowl. The UCLA-UT game would have produced sports page headlines and photographs across the country with the probability of Robinson and three other Black athletes excelling.

Jackie Robinson’s groundbreaking actions in 1947 would then have become Act II.22

BRYAN STEVERSON is a baseball fan dating back to the Class-B Piedmont League of the late 1940s. He is the author of three books: Amazing Baseball Heroes, Inspirational Negro League Stories (2011); Baseball, A Special Gift from God (2014); and Baseball’s Brotherhood Team (2018), and has contributed to other edited works on the game. He is a 1964 engineering graduate from Virginia Tech with postgraduate studies at the University of Minnesota and Cal. Poly in Pomona. A retired chief metallurgist in a Fortune 500 Corporation, Bryan and his wife, Barbara, have five children and nine grandchildren. They currently reside in Venice, Florida, spring-training home of the Atlanta Braves.

The author would like to express appreciation to fellow SABR members Larry Lester and Skip Nipper for their input.

4 At age 15, Robinson won the Pasadena City Ping-Pong championship. The first time he played in the Negro National Tennis Tournament, he reached the semifinals. Robinson shot a 90 early in golf. He was able to beat the Pasadena Junior College handball champion in a game. He was competitive in badminton and fired so well he was asked to join the UCLA rifle team.

7 Atwood, 36. In spite of his gridiron prowess at UCLA, Washington was not drafted by any NFL team.

17 Author phone interview with Haywood Harris, February 8, 2006. Coach Robert Neyland was inducted into the College Football Hall of Fame in 1956.

22 On September 14, 1968, sophomore end Lester McLain suited up and played for the University of Tennessee in a football game against the University of Georgia at Neyland Stadium in Knoxville. McLain became the first African-American to play for Tennessee. It would thus be nearly 20 years since the historic December 9 game.