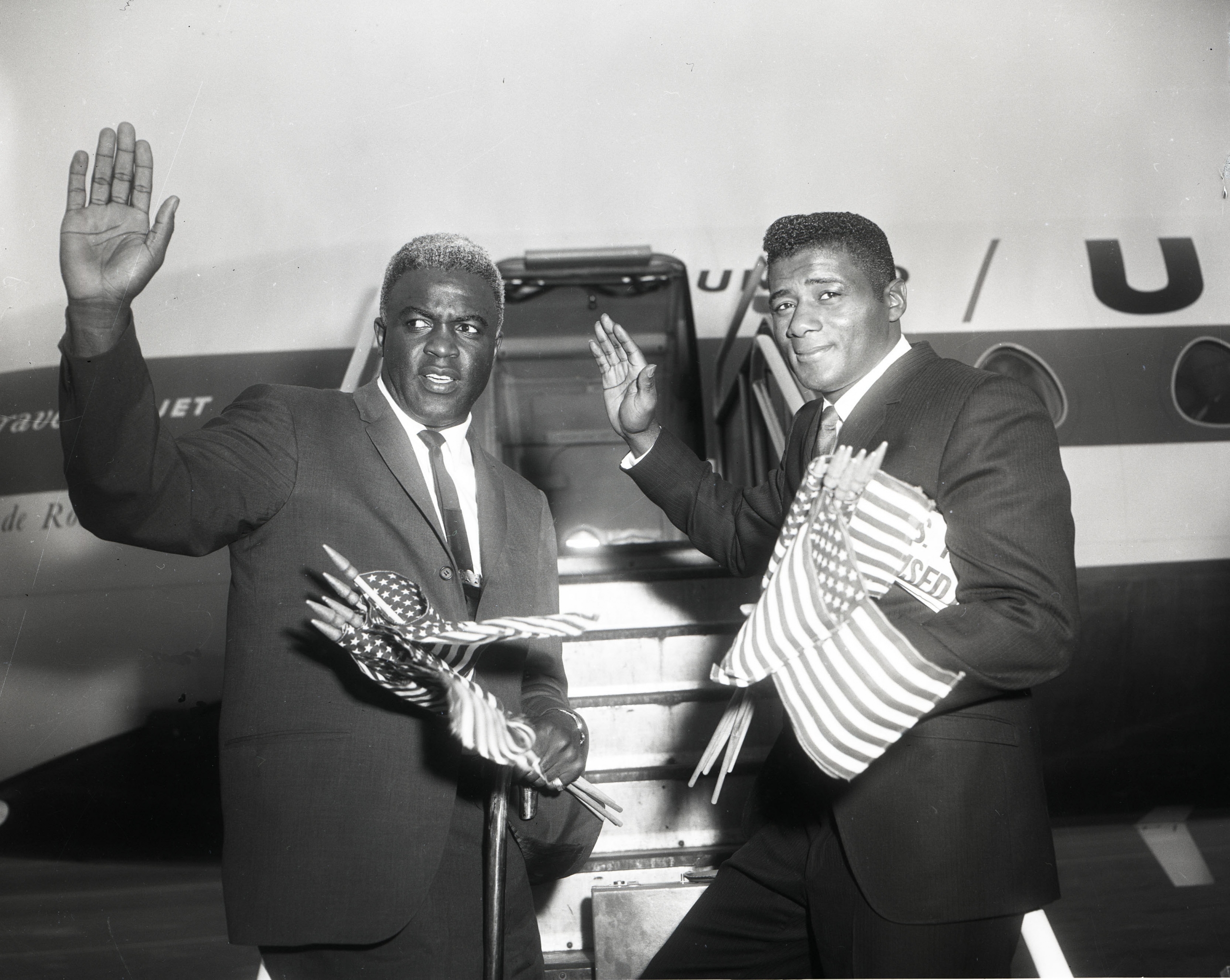 Jackie Robinson, left, and heavyweight boxing champion Floyd Patterson wave to supporters in 1963 at LaGuardia Airport in New York City as they leave for Alabama to work with the Civil Rights Movement. (SABR-RUCKER ARCHIVE)

“Justice too long delayed is justice denied” was the phrase used by Dr. Martin Luther King Jr. in his 1963 “Letter from Birmingham Jail.”1 King and Jackie Robinson both devoted their lives to a timely march to justice. Delay was unacceptable and they proceeded accordingly. It was Robinson, along with his wife, Rachel, and their children, Jack Jr., Sharon, and David, who joined King as platform guests in the 1963 March on Washington. The two leaders had also appeared together earlier, in September 1962, when Robinson spoke to the Southern Christian Leadership Council’s annual Freedom Dinner in Birmingham, Alabama.2 Robinson had become concerned about King’s welfare. On June 15, 1963, he sent a telegram to President John F. Kennedy stating, “The world cannot afford to lose Martin Luther King Jr.” King at the time was in Mississippi for the funeral of recently slain civil-rights leader Medgar Evers.3

When King and other protesters were imprisoned, Robinson had hosted a jazz fundraiser to obtain the needed bail money. Soon after the “Bloody Sunday” tragedy at the Edmund Pettus Bridge in Selma, Alabama, on March 7, 1965, Robinson sent a telegram to President Lyndon Johnson demanding that he take action against the violence inflicted on protesters. These actions led to the passage in 1965 of the Voting Rights Bill.4 King was there when the president signed the legislation.

The careers of Robinson and King became intertwined in the history of the United States. King was born a minister’s son into a middle-class family in Atlanta in 1929. Ten years earlier, Robinson was born into a struggling sharecropper family more than 200 miles to the south in Cairo, Georgia. Their two careers would cross in the 1950s, and civil rights and the nation’s history would forever be changed.

Both men were college educated. King graduated from Morehouse College and earned his Ph.D. at Boston University. Robinson attended UCLA and was one semester short of graduating when he withdrew based upon a lack of perceived opportunities for Blacks. They stood side-by-side in 1957 when receiving honorary doctorates from Howard University.5 King and Robinson came from religious homes and both practiced their faith. King’s first job was as pastor of Dexter Avenue Baptist Church in Montgomery, Alabama.6 While Robinson attended Pasadena Junior College and UCLA, Pastor Karl Downs enlisted him to teach a class on Sunday mornings at the Scott Methodist Church. Even after punishing football games on Saturdays, Robinson, who yearned to sleep late, found the motivation to get up and teach.7 One became a man of the cloth and the other a world-famous athlete. Their commonality in faith and the pursuit of racial justice would unite them in a lasting and significant bond.

King was awarded the Nobel Peace Prize in 1964. Robinson became the first Black inducted into the National Baseball Hall of Fame, in 1962. Both were awarded the Presidential Medal of Freedom and a Congressional Gold Medal for their service to the nation and the world. They were freedom fighters putting their lives at risk for the good of the oppressed.

Robinson and King were change agents. When asked to name the most important Americans of the twentieth century, Pulitzer Prize-winning historian Doris Kearns Goodwin named King, Eleanor Roosevelt, and Robinson.8 The author reiterated these names and added Franklin Delano Roosevelt to the list in subsequent responses.9

As a Nobel laureate, King’s accomplishments have been documented. Like Goodwin, Pulitzer Prizewinning journalist David Halberstam thought highly of Robinson.10 He would state, “He was history’s man. Nothing less. Though he came to the nation disguised as a mere baseball player, he was, arguably, the single most important American of the first post-war decade.” Legendary sportscaster Howard Cosell said, “And when people ask me, “Who was the greatest all-around athlete this nation has ever produced? I say Jackie Robinson, also the greatest all-around man.”11 Others have agreed with Robinson’s significant role in history, including President Barack Obama, who said, “You think about what Jackie Robinson ended up meaning not just to baseball but to the entire society. I would not be sitting here if it weren’t for him.”12

On July 6, 1944, US Army Second Lieutenant Robinson boarded a bus at Camp Hood, Texas. Noticing the wife of a fellow Black lieutenant, Virginia Jones, sitting by herself near the front, Robinson sat down beside her. Mrs. Jones was a light-skinned Black and could be mistaken for being white. She was the wife of fellow Lieutenant Gordon Jones, who like Robinson was a member of the 761st Tank Battalion.13 The bus driver, thinking Robinson, a Black man, was sitting next to Jones, a white woman, ordered Robinson to move to the back of the bus. Robinson refused to give up his seat and an ugly incident ensued. After a military trial, Robinson was found to be not guilty of all charges.14

Similarly, 11 years later, in December 1955, it was seamstress Rosa Parks who refused to give up her seat on a Montgomery, Alabama, bus, leading to a boycott and effectively launching the civil-rights movement. “The boycott mirrored almost exactly (Robinson’s) own single most dangerous act of protest against Jim Crow – in July 1944 … at Camp Hood in Texas.” King was president of the Montgomery Improvement Association, which brought attention to the bus boycott.15

The two civil-rights icons had known of each other for some time. In 1949 the Brooklyn Dodgers, on their way north from spring training, scheduled an exhibition game in Atlanta. Roy Campanella, another Black man on the team, and Robinson had received a threatening telegram from the wizard of the Atlanta Ku Klux Klan. It read, “If you come to Atlanta, we’ll kill you. We’ll shoot you out on the field.” Branch Rickey, the Brooklyn general manager, sought out King, who told him, “Definitely see that Campanella and Robinson come to Atlanta to play.” Upon arriving in Atlanta, the two players went to King’s home for dinner. They stayed with him most of the trip. King, who faced similar threats himself, told them, “Don’t worry about these threats. You carry on just as you’ve been doing. That’s the greatest thing for our country.”16

In January 1956 in Chicago, Robinson attacked Georgia’s governor, Marvin Griffin, for attempting to withdraw Georgia Tech from playing in the 1956 Sugar Bowl against a racially integrated University of Pittsburgh football team. Robinson called on other Southerners to assert: “[T]his is not what we want, that we don’t share this belief.”17 As Georgia natives, actions like these by Robinson and King proved meaningful.

The civil-rights sit-in campaigns began at a Woolworth lunch counter in Greensboro, North Carolina, on February 1, 1960. Four Black students from nearby North Carolina A&T College sat down at the all-white counter but were refused service for nearly an hour. King referred to their action as an “electrifying movement of Negro students [that] shattered the placid surface of campuses and communities across the South.”18

Earlier, in October 1959, after delivering a speech to 1,700 NAACP supporters in Greenville, South Carolina, Robinson had arrived at the airport for his flight back to New York. Bypassing the labeled “Colored Lounge,” he and supporters sat in the main lounge reserved for whites. They were asked to move to the colored lounge. Robinson and his followers refused. After some unrest, these early sit-inners were allowed to stay.19

After Robinson’s election to the Hall of Fame was announced, King played a key role in organizing a testimonial dinner on July 20, 1962, at the Waldorf-Astoria Hotel. King’s action was a source of pride to Robinson. Funds were raised for the civil-rights cause.20

The synergy of King and Robinson surfaces in the perspectives of those who knew them.

King himself said of Robinson, “[H]e underwent the trauma and the humiliation and the loneliness which comes with being a pilgrim walking the lonesome byways toward the high road of freedom. He was a sit-inner before sit-ins, a freedom rider before freedom rides.”22

Author Roger Kahn wrote, “I think it is reasonable to suggest that without Jackie Robinson, Martin Luther King would have lived out his days delivering eloquent sermons in an obscure Baptist church in Georgia.”23

Don Newcombe of the Brooklyn Dodgers was the first major-league pitcher to win all three awards for excellence: the Rookie of the Year, Most Valuable Player, and Cy Young Awards. He remembered, “Martin (i.e., King) said to me a month before he died at my home at my dinner table. He said, Don, you and Roy and Jackie will never know how easy you made it for me to do my job.”24

Robinson likewise supported King and stated, “Let there be no doubt in any man’s mind where I stand on the subject of Dr. Martin Luther King Jr. If ever a man was placed on this earth by divine force to help solve the doubts and ease the hurts and dispel the fears of mortal man, I believe that man is Dr. King.”25

Bringing the two leaders together, the philosopher and author Cornell West said, “More even than either Abraham Lincoln and the Civil War, or Martin Luther King Jr. and the Civil Rights movement, Jackie Robinson graphically symbolized and personified the challenge to the vicious legacy and ideology of white supremacy in American history.”26 A responsive Robinson called King “the greatest leader of the twentieth century.”27

Robinson and King did not agree on every issue. Their major disagreement involved the Vietnam War. King was an early opponent of the war and Robinson initially was a supporter. Robinson’s son, 19-year-old Jackie Jr., was wounded in an ambush in the war on November 19, 1965, and awarded a Purple Heart.28 Although Robinson could be openly critical at times of other civil-rights leaders, “Martin Luther King Jr. was Robinson’s favorite civil rights leader of all time.”29

Both Robinson and King had strong and intelligent women at their side. Rachel Isum Robinson and Coretta Scott King continued the journeys of their husbands. These two Black men, from different backgrounds, separated by a decade in age, became friends in the struggle for justice. In so doing, the synergy of their efforts changed America.

BRYAN STEVERSON is a baseball fan dating back to the Class-B Piedmont League of the late 1940s. He is the author of three books: Amazing Baseball Heroes, Inspirational Negro League Stories (2011); Baseball, A Special Gift from God (2014); and Baseball’s Brotherhood Team (2018), and has contributed to other edited works on the game. He is a 1964 engineering graduate from Virginia Tech with postgraduate studies at the University of Minnesota and Cal. Poly in Pomona. A retired chief metallurgist in a Fortune 500 Corporation, Bryan and his wife, Barbara, have five children and nine grandchildren. They currently reside in Venice, Florida, spring-training home of the Atlanta Braves.