“This is the Cubs’ town,” said the man over beers,
When we talked in the Nixon years;
We discussed Chicago’s teams, tossed names we both knew,
In an exercise best named “recall and review.” 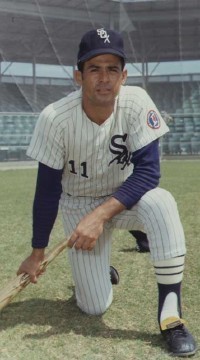 He had loved the Cubs all his life, less so the Pale Hose,
While lamenting, to varying degrees, both teams’ woes;
He politely gave lip service to Wynn, Pierce, and Shaw
To maintain a desired conversational thaw.

For me, those three names held a special allure,
Long after the pitchers had caused such a stir;
The ’59 Sox were a team to embrace
When they disposed of the Yanks and captured first place.

His opinions ranked low on the list of my cares,
For I had enjoyed each of Veeck’s scoreboard flares;
As the men of Comiskey, whose speed was revered,
Were applauded, praised, heralded, lustily cheered.

The term “Go-Go Sox” meant a team that was quick
Though some players weren’t fast, and some hit not a lick;
Big Klu and Sherm Lollar were slow on their feet,
But watching them play was always a treat.

“Little Louie” and Nellie, a slick DP combo,
Ended many a frame with a catch, toss and throw;
The hot corner was Bubba’s, while Landis chased flies,
Plucking spheres of horsehide out of the skies.

In the dugout Al Lopez, often called “The Señor,”
Hoped for better than his Tribe had done five years before;
But the skipper was sadly denied the big prize:
After six games with the Dodgers, he’d again agonize.

But AL fanatics are resilient types,
(Necessarily so, unless their team wears pinstripes!)
White Sox fans bounced back and my spirits did, too…
And the memories—ah, the memories—I have quite a few!

FRANCIS KINLAW has contributed to 15 SABR convention publications (the number of double plays grounded into by Ernie Banks during the Cubs’ memorable 1969 season) and attended 19 SABR conventions (Banks’ doubles total that year). A member of SABR since 1983, he resides in Greensboro, North Carolina and writes extensively about baseball, football, and college basketball.