What makes Jeter’s accomplishment even more fantastic is that he was only the second player since 1900 to have two or fewer hitless games out of any 56 game stretch. Joe DiMaggio was the other, of course, when he had zero hitless games in that famous 56-game stretch in 1941.

In Baseball Research Journal #35, I wrote an article about players who were within a few hitless games of putting their name at the top of the hitting streak podium. And Jeter isn’t the only player who added his name in 2007 to the list of players who had just three or fewer hitless games out of 56. Ichiro Suzuki, long believed to be the active player with the best chance of beating DiMaggio’s record, had a hit in 53-out-of-56 games from May 7 through July 5.

Besides those two active players, my continued research into the subject yielded two more historical players who went hitless in just three out of 56 games. The first new addition to the list is Sam Rice, who had a hit in 53-out-of-56 over 1929 and 1930. The other player, who is a bit of a surprise, is Doc Cramer, who also took the collar just three times out of a 56-game stretch over 1932 and 1933.

Considering how many players have come within just a handful of games from matching DiMaggio’s 56game hitting streak, it may just be a matter of time before it is seriously challenged, although players in Doc Cramer’s era didn’t have quite the media pressure that a player chasing DiMaggio today would have. 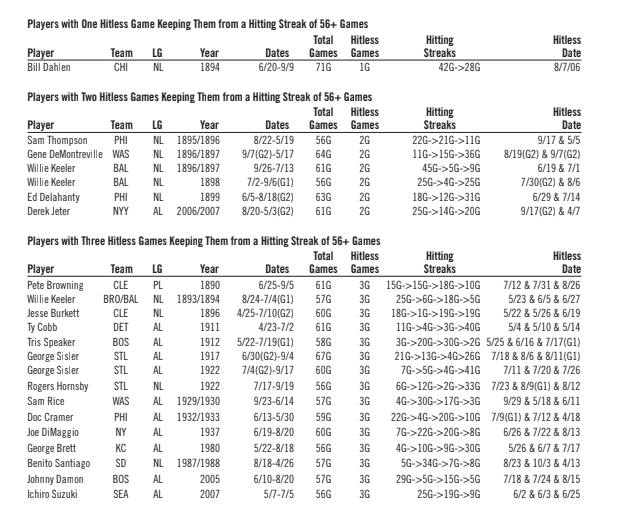