This article was written by David Shoebotham

This article was published in the 1976 Baseball Research Journal

Who has the highest single season batting average in major league history? The modem fan would probably say that Rogers Hornsby’s .424 in 1924 is the highest. Old timers would point out that Hugh Duffy hit .438 in 1894. But the correct answer is Ty Cobb with .385 in 1910.

How can .385 be higher than .438? The answer is when it is compared to the average of the entire league for the year in question. This is the only way performances from different seasons and leagues can be compared. Thus a hitter’s relative batting average, which is the true measure of his ability to hit safely, is computed as follows:

As a further refinement (since it is unfair to compare a player to himself) the player’s own hits and ABs can be subtracted from the league totals, thus giving an average relative to the remainder of the league.

As an example, compare Bill Terry’s National League leading .401 in 1930 to Carl Yastrzemski’s American League leading .301 in 1968. At first glance the 100-point difference would make it appear that Yastrzemski’s average should not be mentioned in the same breath as Terry’s. But look at the calculations of relative averages:

The relative averages are almost identical, meaning that had the two performances occurred in the same season, the batting averages would have been within a few points of each other. The big difference, of course, is that in 1930 the National League had a combined average of .303, the highest of any major league in this century (and two points higher than Yastrzemski’s 1968 average), whereas in 1968 the American League had a combined average of .230, the lowest for any major league ever. (A relative average of 1.30 indicates that a player’s batting average was 30% higher than the remainder of his league.)

The following two graphs show league averages since 1900. It can be seen that the 1 920s and 30s, following the introduction of the lively ball, were fat times for hitters. Both leagues reached their recent lows in 1968, the “Year of the Pitcher.” Note that for the last three seasons the American League’s Designated Hitter rule has artificially raised the league’s average and thus lowered individual relative averages. 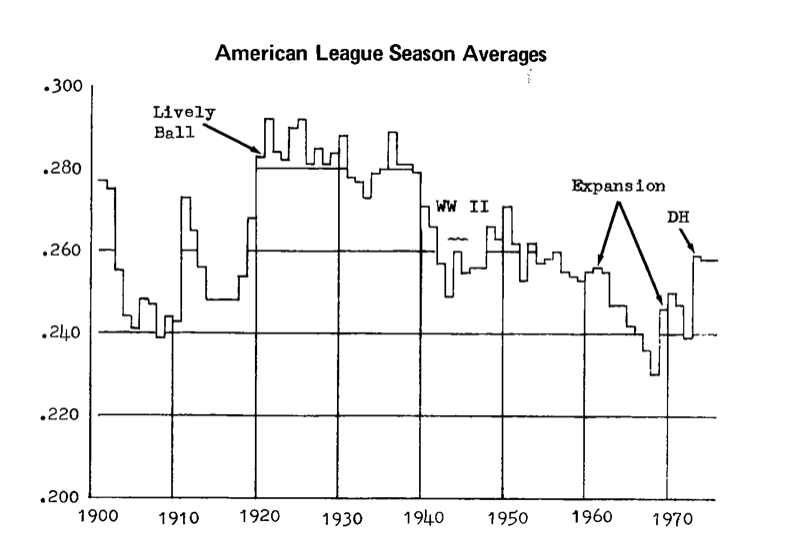 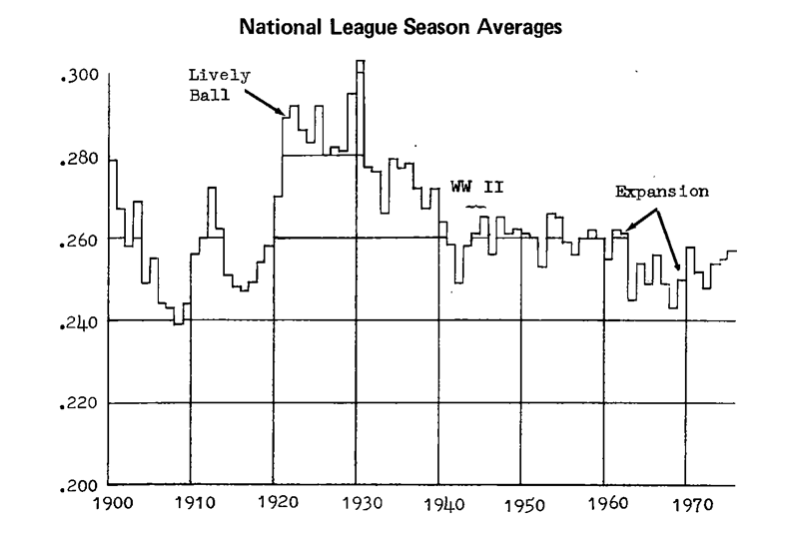 The table below shows the highest single season relative averages since 1900. The list is clearly dominated by Ty Cobb, who has 10 of the top 19 averages, including the highest of all: 1.594 in 1910. Interestingly, the second highest relative average is Nap Lajoie’s 1.592, also in 1910. That epic batting race, enlivened by the offer of a new car to the winner, resulted in a major scandal, the awarding of two automobiles, and incidentally the two highest relative averages of all time. Rogers Hornsby’s .424 produced the highest National League mark of 1.51, but this ranks only 14th on the list. (Duffy’s .438 reduces to a relative average of about 1 .42.) Note that five of this century’s .400 averages do not qualify for this list.

With the modem preoccupation with home runs, high relative averages (not to mention high absolute averages) have become rare. The only relative average over 1.45 in recent years is Joe Torre’s 1971 mark. For a look at other recent high marks, the next table shows the highest relative averages of the last 20 years. It is interesting to note that Rod Carew’s 1974 and 1975 marks would probably be well over 1.45 except for the Designated Hitter rule in the American League.

The final table shows the all-time leaders in career relative average. Not surprisingly, Ty Cobb tops the list with an average that is just a few hits short of 1 .40. Close behind Cobb is Shoeless Joe Jackson, though the closeness of their averages is deceptive. Jackson’s career was abruptly terminated while he was still a star performer, and therefore he did not have the usual declining years at the end of his career that would have lowered his average. During the years that Jackson averaged 1.38, Cobb was averaging a fantastic 1.50.

It can be seen that despite the preponderance of pre-1920 hitters in the single season leaders, the career list contains players from all periods since 1900, including four who are active. Rod Carew, who in 1975 moved past Ted Williams into third place, seems destined to be one of the all-time leaders in relative average. Whether all four active players will finish their careers among the leaders is an open question, but at least they show that hitting for high average is not altogether a lost art.