This article was originally published in SABR’s The National Pastime, No. 14 (1994). 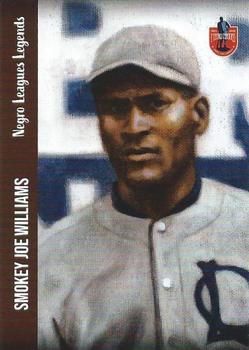 My most desired time-machine dream game happened on August 2, 1930. On a hot, humid summer night in Kansas City, Missouri, two men, one with smoke and the other with fire, engaged in a wild, free-swinging 12-inning contest that would result in a total of 46 strikeouts. Neither man blinked as they mowed down hitter after hitter in one of the first night games ever played in professional baseball.

But who were these guys?

On one mound was Joe Williams, a seasoned 44-year-old fireman with a blazing fastball and diamond savvy. Williams’s Homestead Grays, a new entry into the Negro American League, included three future Hall of Famers in Oscar Charleston, Judy Johnson, and rookie Josh Gibson. Owned by Cumberland Posey, the Grays rode into town on a nine-game winning streak over the Kansas City Monarchs that had started back in Pittsburgh. Posey’s posse was poised to establish a reputation in this part of the country, and began the three-game series with a victory the night before.

If someone combined a few drops of Roger Clemens’ rocket fuel, a couple of ounces of Satchel Paige’s control, a tiny pinch of Bob Feller’s savvy, a dash of Nolan Ryan’s tenacity and a little streak of meanness — they got Joe Williams. At times, Smokey Joe’s ball sizzled through the air, and would explode into the catcher’s leather mitt with a deep, resounding thump. It was the unmistakable sound of baseball smoke from one of the game’s greatest power pitchers.

Everybody called him Smokey, for his fastball filled nostrils with the sizzling aroma of burnt horsehide. At 6-feet-5, the tall Texan was a towering inferno of a pitcher. “Joe didn’t wind up. He pitched just like Don Larsen, right from the shoulder,” claimed pitcher Sam Streeter. Having no windup to time his delivery, this flame-thrower was a jig-saw puzzle for any batter.

“Let me tell you about Smokey,” said Hall of Fame writer and my mentor Sam Lacy in a 1999 interview. “Walter Johnson. He never threw a curve ball. I saw him in Griffith Stadium. He was in his prime then. He threw a sidearm and overhand to spots. But the ball came up there blazing, looking like an aspirin tablet. I thought Smokey was better than Johnson, Bob Lemon, or Mike Garcia.”

Perhaps Williams’ greatest satisfaction was compiling a career 19-7 record against white major-league teams. Even more remarkable is the fact that two of the losses came at age 45, with two other defeats by slim 1-0 margins. Overall, he shut out major-league clubs 10 times. 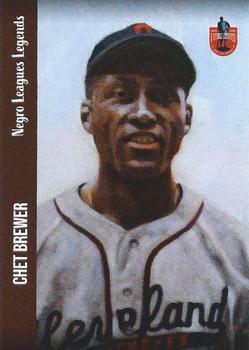 The other dude on the rubber was from Leavenworth, Kansas. At the age of 4, he lost three toes off his right foot when his home-made scooter ran under a streetcar. Chester Arthur Brewer claimed the injury had no effect on his baseball career. Often the staff workhorse, Chet Brewer had shared in a 1989 interview, “Sometimes, week after week, I would pitch Sunday, Wednesday and Sunday again. But I stayed in shape. The secret to my pitching success was keeping my legs in condition. People would say his arm gave out. No, it was his legs. You have to keep your legs strong and I just ran all the time. In the late innings, my legs were strong and I would still be pumping off that mound.”

At just 23 years old, Brewer was pumping and growing into his own as a consummate professional. His Monarchs had pistol-whipped the Negro National League teams the previous season winning 62 out of 79 games.

Brewer had a sneaky change-up, an overhand drop, a lively fastball, an emery ball with an occasional spit ball. His spitter waterlogged batters, while his emery ball made them roller-coaster dizzy. Brewer had a PhD in doctoring the baseball. This medicine man had the gift of deception with an array of placebo pitches. Uncharacteristically, the devious right-hander was known to be notoriously tough on left-handed hitters. Brewer had velocity, command, and poise, making him one of baseball’s most successful finesse pitchers.

One teammate thought Brewer’s rep for throwing illegal pitches was unwarranted. “Chet wasn’t a cheater, but he knew how to throw the spitter,” said former Monarch catcher Sammy Haynes. “See, in the Negro Leagues, we would only play with a dozen balls for a whole ballgame – the fans would have to throw them back on the field after a foul ball. If Chet found that little scratch on the ball, he knew what to do with it.”

It was now high-noon drama for this Saturday nightcap, with smoke versus fire. For seven innings the Monarchs might just as well have remained on the bench sipping sarsaparilla. They couldn’t buy a hit. In the eighth, however, Smokey Joe threw one down the middle of the plate and Newt Joseph got the Monarchs’ first hit, a double. Joseph stole third, as Williams fanned T.J. Young. Seldom-used John Turner, Monarch first baseman, followed with a soft liner over the infield. It looked like a sure Texas League looper, but Grays shortstop Jake Stephens, who once wrote “I am the best short fielder that ever matriculated among the White Roses of York, PA,” went back and made a spectacular over the shoulder catch, robbing the Monarchs of a run and possible victory. Just like most pitchers trying to be hitters, Brewer ended the inning, going down on three swings.

The showdown continued in the seventh, eighth, and ninth innings along with the first batter in the tenth, as Brewer whiffed 10 straight Grays. Ten up, 10 down, pick a tombstone. Overall, Brewer struck out 19 batters. The good doctor held matters even until the 12th frame when the Grays squeezed the trigger for a 1-0 win. Oscar Charleston walked, Judy Johnson popped out, and George Scales grounded out with Charleston moving to second. Next, center fielder Chaney White slapped a leather bullet off the third-base bag, bouncing it into foul territory, and out of the reach of the Monarchs’ Newt Joseph. The great Oscar rode home on a cloud of dust.

Once the smoke cleared, Smokey Joe Williams emerged as baseball mythical top gun. At times hotter than a charcoal briquette and with more smoke than a chimney, he owned the inside of the plate and was victorious that day. Williams blazed to glory that night with 27 strikeouts in 12 innings, walking one man. Except for Joseph’s double in the eighth, he had not allowed a ball hit out of the infield, as the Grays took their second victory of the series.

On that day, the future Hall of Famer, Smokey Joe was without peer! Oh, I wish I had scored this game. My scorecard would have been littered with K-fetti. Over the years, many scribes have wondered why the letter “K” stands for a strikeout. There are many theories, but no one really knows for sure. Secretly, great speed ballers like Clemens, Feller, Paige, Ryan, Steve Carlton, and Randy Johnson may have known the answer. That is, the letter “S” was already reserved for a man called “S-m-o-k-e-y.”

It had to have been a great time to see two outstanding pitchers, one a veteran and the other a newcomer to star status, go head-to-head in the first year of night baseball? Were the night lights a factor in the high strikeout rate? Probably so, but let’s not forget that Johnny Vander Meer, the only pitcher in major-league baseball history to throw back-to-back no-hitters – first against the Boston Bees, and, days later, against the Brooklyn Dodgers in the first night game played at Ebbets Field in 1938.

Oh my, what a night it had to be! Star light, star bright. I wish to see that game tonight. I wish I may, I wish I might. As we know, only the “Stars” come out at night.