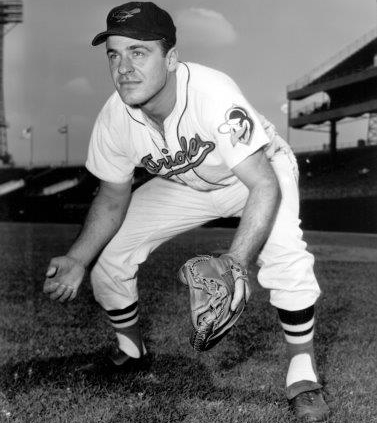 Major League Baseball held its 25th annual All-Star Game at Memorial Stadium in Baltimore on July 8, 1958. The game was broadcast nationally on NBC Radio and TV. Ernie Harwell and Bob Neal were the radio announcers while Mel Allen and Al Helfer handled the television broadcast. MLB had recently signed a five-year contract with NBC worth an estimated $3.25 million per year for exclusive rights to the All-Star Game and World Series. A portion of the gate receipts and NBC revenue from the game would go directly to the Player’s Pension Fund.

The Cincinnati Reds had monopolized the voting in 1957 thanks to blatant ballot-box stuffing by their fans. At that point, Commissioner Ford Frick stepped in. To keep the selections balanced, Frick dropped two Cincinnati players, replacing them with Willie Mays and Henry Aaron. Stan Musial was also added (though the eventual tally would show he received sufficient votes to be named to the roster regardless).

A new format was developed for 1958 to avoid geographic bias. The players, coaches, and managers would select eight starting position players from their respective leagues. In order to circumvent any favoritism, no one could choose a player from his own team. Baltimore fans were elated when Gus Triandos of the Orioles edged out Yankees backstop Yogi Berra as the American League’s starting catcher. 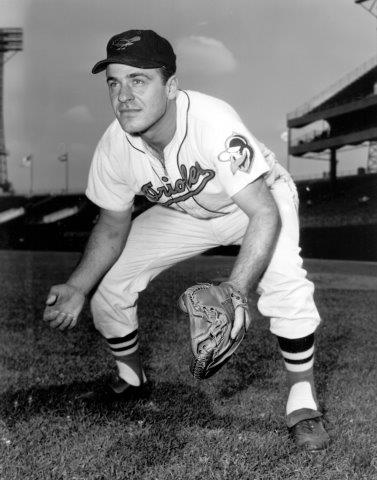 Gus Triandos was the starting catcher in the 1958 All-Star game, one of only two hometown Orioles to make the AL squad. (NATIONAL BASEBALL HALL OF FAME LIBRARY)

The managers from the previous year’s World Series would pilot the All-Star squads in addition to selecting the remaining 17 players, including their starting pitchers. Each starting player except the pitchers was required to play three innings unless he was injured.

The Emerson Hotel served as the headquarters for the American League contingent as well as the radio and press corps. Commissioner Frick and his staff were quartered at the Sheraton-Belvedere, while the National League entourage stayed at the Lord Baltimore. The pre-game festivities included a parade that featured players from both leagues riding in open convertibles from downtown Baltimore to Memorial Stadium on 33rd Street.

It was a humid day with temperatures hovering around 90 degrees as the first of the 48,829 fans passed through the turnstiles at the ballpark. The attendance for the game was the second largest in Baltimore baseball history. The highest total had been on October 9, 1944, when the International League Orioles drew 52,833 in Game Four of the Junior World Series against Louisville. The huge crowd in 1944 served notice to the baseball world that Baltimore was ready to support a major-league team.

Coming into the 1958 All-Star Game, the American League held a 14-10 edge over the senior circuit. Milwaukee Braves manager Fred Haney was at the helm of the Nationals while Yankees skipper Casey Stengel led the Americans. Haney choose the mainstay of his staff, Warren Spahn, as his starter. Stengel, showing a similar sentiment, gave the starting nod to Yankee Bob Turley.

Both starting pitchers had uncommon deliveries. Spahn, a master of changing speeds, employed an elongated leg kick, his knee rising almost up to his shoulder. During his follow-through, his glove deceptively passed by his face as he delivered the baseball.

Turley had no discernible windup. It was strictly rear back and fire. With a variety of pitches in his arsenal, it was his blazing fastball that earned him the nickname “Bullet Bob.” Turley lived in the Baltimore suburb of Lutherville. Pitching for the Orioles in 1954, he’d won the inaugural home opener at Memorial Stadium.

Baltimore’s ballpark had its own unique dimensions. The distance down each foul line was 309 feet. Short by most standards, the degree of difficulty was heightened by a 14-foot wall that started at each outfield corner. The imposing barrier angled out to 360 feet, where it met a seven-foot-high chain-link fence that ringed the perimeter of the outfield. The deepest part of the park was 410 feet in center. Additional seating was added for the game alongside of each dugout, which necessitated moving the bullpens from foul territory to behind the outfield fence.

After Vice President Richard Nixon tossed the ceremonial first ball, Mays stepped to the plate. Haney mixed things up by putting Mays, who had been hitting third for San Francisco, in the leadoff spot. The move paid off when the Giants star smacked Turley’s first pitch off the third-base bag. The ball caromed high in the air, and by the time it landed in Frank Malzone’s glove, Mays was past the bag at first. Bob Skinner followed with a fly out to right.

The next batter was Stan Musial, playing in his 15th All-Star Game. With the count 3–1, Musial stroked a single to right field. Mays, running on the pitch, made it all the way to third. The hit was the 17th of Musial’s All-Star career. Aaron then lofted a sacrifice fly to deep left center that plated Mays. Turley plunked Ernie Banks in the back with a curveball. After Frank Thomas walked to load the bases, Stengel came out to the mound for a conference. With Bill Mazeroski at the plate, Turley’s first toss to the Pittsburgh second baseman eluded the glove of Triandos, sending Musial home with the second run of the game. Mazeroski drove the next pitch into left field. Bob Cerv, playing with a broken toe, lost his balance as he ran in for the ball, but he somehow managed to make the shoestring grab for the final out.

Leading off the Americans’ half of the first, Nellie Fox reached on a throwing error by shortstop Banks and went to third on a single by Mickey Mantle. The next man, Jackie Jensen, leading both leagues with 24 home runs, grounded into a double play, with Fox scoring. Cerv singled but Bill Skowron flied out to end the frame.

Del Crandall was retired starting off the top of the second. Spahn was able to work Turley for a walk before being erased on a Mays fielder’s choice. With Skinner at-bat, Mays took off for second. Triandos’s peg got past Luis Aparicio, allowing Mays to advance to third. Skinner proceeded to knock Turley out of the box with a RBI single. Stengel replaced Turley with Cleveland Indians pitcher Ray Narleski, who checked the threat by retiring Musial on an infield popup.

With one down in the bottom of the second, Triandos drove a base hit up the middle. Aparicio hit into a fielder’s choice, forcing Triandos. Narleski came through with a safety, putting two men on base. After a Fox RBI single, Mantle flied out, halting the rally.

For the next few frames, both pitchers held their opponents scoreless. Bob Friend replaced Spahn in the bottom of the fourth.

Mickey Vernon, pinch-hitting for Narleski, opened the fifth with a single. Fox followed suit with Mantle drawing a walk to load the bases. Vernon scored on a Jensen groundout. After Cerv was walked intentionally, Skowron bounced into an inning-ending double play.

Early Wynn came in for Narleski in the sixth, retiring the side in order.

Malzone started off the bottom of the stanza with a single. A crescendo of boos rose from the stands as Stengel sent in Berra to pinch-hit for Triandos. Berra’s infield popout elicited a chorus of sarcastic hurrahs from the Baltimore crowd. Stengel told a reporter after the game, “I have been hissed all my life. You can’t be in this business a long time and have all the cheers.”1

The next man up was Ted Williams, pinch-hitting for Aparicio. He proceeded to bounce a chopper to the left side that Thomas mishandled. With runners now on first and second, Gil McDougald, batting for Wynn, lofted a single into short left center that scored Malzone. With the score 4–3 in favor of the Americans, Haney pulled Friend, replacing him with Larry Jackson. Fox grounded into a double play to end the inning.

In the seventh, Stengel brought in 25-year-old Orioles southpaw Billy O’Dell from the bullpen. O’Dell, the first “Bonus Baby” signed by Baltimore in 1954, retired the next nine batters in order on 27 pitches, sealing the win for the American League.2 Turk Farrell of the Phillies pitched the last two innings for the Nationals, striking out four batters, including Williams. Baltimore native Al Kaline replaced Williams in left field in the top of the ninth.

In what was the first All-Star Game without an extra-base hit, there were three outstanding defensive plays, two by Cerv, the other by Williams. In addition to the Mazeroski grab, Cerv slammed into the left-field wall hauling in a Del Crandall drive in the sixth. An inning later, Williams made a leaping catch, robbing pinch-hitter Johnny Logan.

When asked about his game-winning bloop hit after the game, McDougald, who was in the midst of a 0-for-18 slump, replied, “I’m not ashamed of it. The way I have been hitting lately, I’ll take anything.”3

Stengel congratulated his players in the clubhouse: “I want to thank all you men for a splendid job. But most of all I want to shake the hand of this young fella right out here from the Orioles. He made all those National Leaguers look the same size didn’t he?”4

O’Dell, who received the Hearst Newspaper Award for his outstanding performance, told reporters, “The only pitches I used were my slider and fastball. When my control is good I know I’ll do all right. I had only one worry all the time I was out there and his name was Stan Musial. It seemed all downhill once I got past him in the eighth inning. I know doggone well that all of those National League hitters are tough or else they wouldn’t be there. As far as I was concerned, though, Musial was the fellow that could hurt me the most.”5

JIMMY KEENAN has been a SABR member since 2001. His grandfather, Jimmy Lyston, and four other family members were all professional baseball players. A frequent contributor to SABR publications, Keenan is the author of the following books: “The Lystons: A Story of One Baltimore Family & Our National Pastime,” “The Life, Times and Tragic Death of Pitcher Win Mercer,” “The Lyston Brothers: A Journey Through 19th Century Baseball.” Keenan is a 2010 inductee into the Oldtimers Baseball Association of Maryland’s Hall of Fame and a 2012 inductee into the Baltimore’s Boys of Summer Hall of Fame.