This article was written by Bob McConnell

Who was William Holbert? No, not the founder of the National League.  That was William A. Hulbert. We are talking about William H. Holbert, a National League catcher from 1876 to 1888. His claim to fame is that he is the only major league player to go to bat 2,000 times in his career without hitting a home run. A poor hitter, he collected 486 hits in his 12-year career, including 41 doubles and 7 triples – but no home runs.

The focus of this article is the homerless Holberts of the baseball world. For lack of a better phrase, we will call them “Non-Home Run Hitters.” They can’t be called Hitless Wonders because some of them hit the ball pretty good   just not very far. Much is written about the Cadillac drivers, sluggers such as Babe Ruth, Ralph Kiner, Hank Aaron and Mike Schmidt. What about the singles hitters who drove Chevrolets, or, in Holbert’s case, couldn’t even qualify for a horse and buggy?

Holbert was not an isolated case of the dead ball era. The infrequent home run hitter has always been with us. Four active players are good examples.

First there is Duane Kuiper of the San Francisco Giants, who has hit only one roundtripper in ten years and 3259 at bats. Jerry Remy of the Red Sox has not collected a four-base wallop in his last 2188 at bats, the longest homerless streak since the days of Mike Tresh and Emil Verban in the 1940s. Larry Bowa of the Cubs has connected only 15 times in 2000+ games and 7817 at bats, which ranks him near the top among long-service players and ahead of such stars as Maury Wills, Rabbit Maranville, Richie Ashburn and Nellie Fox.

And finally, there is Don Sutton, the hard-luck hurler for the Milwaukee Brewers. Don, who doesn’t get a chance to bat any more, has accumulated 1331 career at bats without a homer. He moved past Waite Hoyt and Joe McGinnity in 1982 while still in the National League, to become the top pitcher in the no-home run sweepstakes (Tommy Bond doesn’t count because he played some games at other positions). Sutton is the antithesis of Wes Ferrell, who hit 38 home runs in 1128 at bats.

The following list shows the players with the lowest career home run averages, in other words the top Non-Home Run Hitters. The list is broken down into four groups, based on length of service. Note that Don Kessinger qualifies as the leader in the 7500+ group, but he also qualifies in the 5000+ group and is listed there. Many of the players on the list can be considered poor to average hitters. However, there are several pretty fair country hitters, including Sam Rice, Lloyd Waner, Richie Ashburn and Stuffy McInnis, who compiled career batting averages of over .300. It is interesting that Sparky Adams and Miller Huggins, included in the 5000+ group, compiled identical AB and HR totals.

The Home Run Average used on the list is defined as the average number of home runs that a player would hit in a season with 600 at bats.

The following table shows the leading Non-Home Run Hitter in the majors each year, the player with the most at bats and no home runs. It is interesting to note that, with three exceptions, all leaders had enough at bats to qualify for the annual batting title. The rare exceptions were Eddie O’Brien with only 261 AB in 1953, Richie Ashburn with 307 in 1961 and Jose Tartabull with 310 in 1962. This table further demonstrates that non-home run hitting should not be relegated to the dead ball era.

As mentioned previously, Donie Bush and Doc Cramer each put together four consecutive homerless seasons. This enabled them to compile long at bat streaks without a homer. However, the record belongs to Tommy Thevenow, a National League infielder, who went from September 24, 1926 to the end of his career in 1938 without a four-base blow – a streak of 3347 at bats. He hit two home runs, both early in his career, and both were inside-the-park jobs.

In the American League, Eddie Foster, a third baseman who spent much of his career with the Washington Senators, went from April 20, 1916, to the end of his career in 1923 without connecting. His last home run came in Washington’s 1916 opener with President Wilson in attendance. It also was an inside-the-park homer. If it hadn’t been for that misplayed outfield fly, Foster would have had over 4000 homerless at bats instead of 3278. 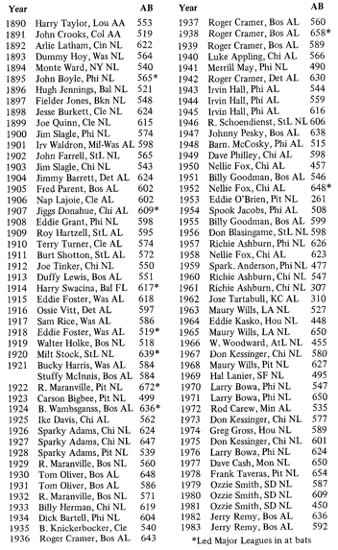 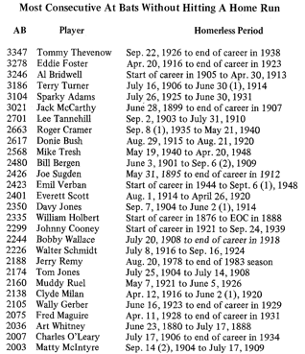 It looked like Johnny Cooney was going to go through his entire career without a home run. Then, on consecutive days in late September of 1939, when he was 38 years old, he hit his only two roundtrippers. Johnny started in the majors in 1921 as a pitcher and part-time utility player. After a sojourn in the minors in the early 1930s, he returned to the majors as a full-time outfielder.

As in the case of most major league records, a minor leaguer has surpassed Thevenow’s streak. Albert E. Wright (not to be confused with Albert O. Wright, who slugged 323 minor league home runs) chalked up a streak of 4607 at bats during the late 1930s and early 1940s, mostly while playing in the Pacific Coast League. John O’Neil set an Organized Baseball record with a streak of 4635 from June 12, 1942, to the end of his career. His streak included 4541 at bats in the minors plus 94 for the Philadelphia Phillies in 1946.

The latest player to pass the 2000 at bat mark is Jerry Remy. With 592 at bats for the 1983 season, Jerry upped his streak to 2188. Remy was quite a slugger during his first four seasons in the majors, blasting seven homers. However, he seems to have lost the touch. His last one was on August 20, 1978.