It’s an article of faith these days that batting average is an old-fashioned statistic and that the new Holy Grail for batters is OBP—on-base percentage. The “walk’s as good as a hit” approach has a lot to recommend it. After all, the hitter’s goal is to get on base and, if possible, help score runs. The argument becomes complex, of course. Was Ty Cobb right in criticizing Ted Williams for taking a base on balls rather than trying harder to drive in a run, or was Williams right in insisting on the plate discipline that he felt made him the hitter he was—by refusing to swing at a bad pitch? 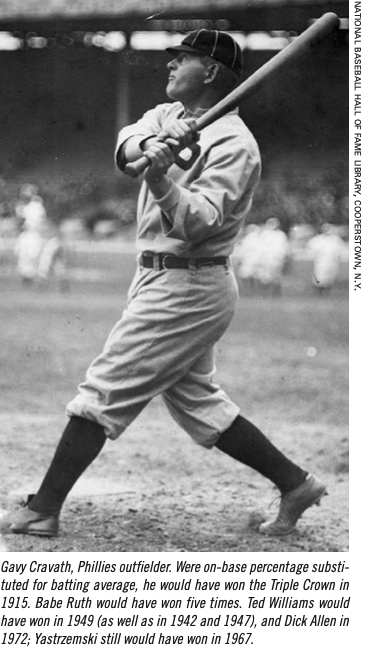 Others will argue that focusing on on-base percentage is also too simplistic, that a more sophisticated array of statistics is necessary to truly rank the best performance by hitters in a given year. (There are also arguments that the term OBP is a misnomer and that the more accurate term is OBA—on-base average.)

Leaving all that aside and considering only the substitution of on-base percentage for batting average as a measure of a hitter’s performance, would there be a different set of Triple Crown winners if the three criteria were OBP, home runs, and runs batted in? Yes, there would. Two tables are presented below. Beginning with 1903, the first year that both leagues agreed that foul balls (the first two of them, anyhow, of an at-bat) are strikes, there are twelve seasons in which a player has led his league in batting average, home runs, and runs batted in all in the same year. Two players have done it twice: Rogers Hornsby and Ted Williams.

A player who draws a lot of walks is going to have an on-base percentage much higher than his batting average alone. Barry Bonds set the major-league record for the highest single-season OBP (.582) in 2002, in large part due to the large number of intentional and semi-intentional walks he drew: a record 198. He improved on those figures with 232 walks and an OBP of .609 in 2004. Bonds had shattered Ted Williams’s long-established record of .553, set in 1941. Bonds led the league in batting average in 2002 as well but was second in home runs and only sixth in RBIs (in good part because the bat was taken out of his hands so many times by pitchers working around him.)

Replacing batting average as one of the three criteria for the Triple Crown and using on-base percentage instead, we find 21 seasons in which a batter has won the alternative Triple Crown. Babe Ruth, who never won the standard Triple Crown even once, ranks first with five of those 21 seasons. Rogers Hornsby still has his two, but, on the strength of his 1949 season, Ted Williams has three. No other player has more than one, but we find that Jimmie Foxx, Joe Medwick, and Mickey Mantle lose their Triple Crowns, while Gavy Cravath, Willie McCovey, Harmon Killebrew, Dick Allen, Mike Schmidt, and Barry Bonds each win one apiece. 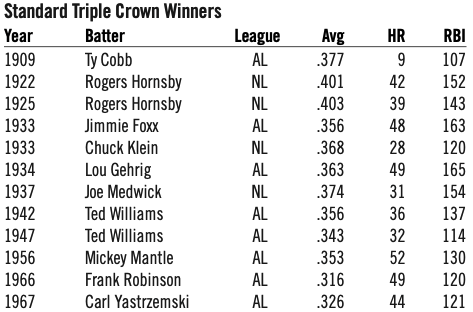 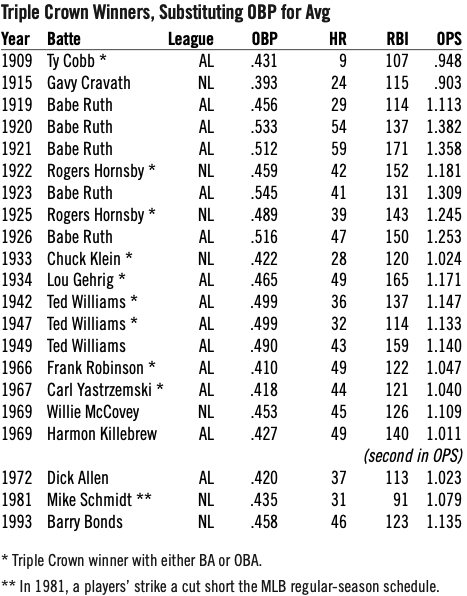 If one wanted to pose the higher standard of a Quadruple Crown, requiring leadership in both batting average and on-base percentage, the asterisked players would have won it: Hornsby (twice), Williams (twice), and Klein, Gehrig, Robinson, and Yastrzemski.

Because OPS has become such a fashionable statistic in recent years, we added it to the new table and find just one instance in which the OPS leader was other than the OBP leader. In 1969, Killebrew was second in OPS, behind Reggie Jackson, who posted a 1.018 OPS that year. Killebrew was third in slugging, behind both Jackson (.608) and Rico Petrocelli (.589).

Clearly, the large number of walks drawn by Ruth and Williams has boosted their OBP figures. Ruth won only one batting title (.378 in 1924), but he led the American League in on-base percentage in ten different seasons. Among players who have appeared in 1,000 or more major-league games, he holds the fourth-highest walks percentage (.194), behind Ted Williams (.206), Barry Bonds (.203), and Max “Camera Eye” Bishop (.200).

Williams ranks first, having walked in 20.6 percent of his plate appearances. His greater number of walks lifted Williams over George Kell for the OBP lead in 1949. While Williams just barely lost the battle for average (his .343 was really .3427, to Kell’s .3429), Kell’s on-base percentage was .424 to Williams’s .490. In fact, Kell ranked only fourth in OBP that year, behind both Luke Appling (.439) and Eddie Joost (.424). Williams had walked (or been walked) 162 times; Kell didn’t even rate in the top 10. Despite having about the same number of at-bats (or less than 10 percent fewer—Kell had 522 and Williams had 566), Kell drew only 71 walks, less than half as many as Williams did. Kell hit only three home runs in 1949, to Williams’s 43, and drove in only 59 runs, exactly 100 behind Williams’s 159. (Williams’s teammate Vern Stephens also drove in 159 that year.) Had Williams made just one out fewer in 1949, all else being equal, he would have won the batting title too—but, of course, he didn’t.

Bishop? Despite his high percentage of walks, he led his league only once (1929) and never once ranked higher than third (1933) in on-base percentage. For his career, he is tied for thirteenth in OBP among players since 1903.

Babe Ruth ranks second with a lifetime on-base percentage of .474, while Williams ranks first with .482. Over the course of a career that extended from 1939 to 1960, and despite twice interrupting his career for military service, almost half the times Ted Williams stepped into the batter’s box, he reached base safely.

BILL NOWLIN, vice president of SABR, is the author or editor of twenty books on the Red Sox, including When Boston Still Had the Babe: The 1918 World Champion Red Sox (Rounder, 1918).