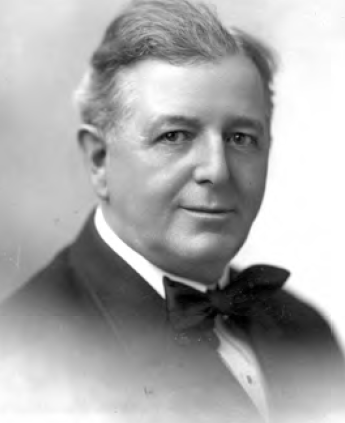 This article was written by Chuck Hildebrandt

The risk to the credibility of baseball’s new World Series was substantial when Chicago White Sox owner Charles Comiskey threatened to keep his team from playing in the postseason — one year after New York Giants manager John McGraw had done the same.

The risk to the credibility of baseball’s new World Series was substantial when Chicago White Sox owner Charles Comiskey threatened to keep his team from playing in the postseason — one year after New York Giants manager John McGraw had done the same.

The morning of October 4, 1905, broke as had many other early autumn days over the prior four decades: with baseball teams locked in the throes of a pennant race. 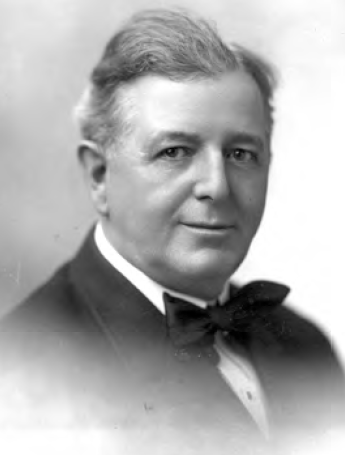 This season it was Charles Comiskey’s White Stockings of Chicago pitted against Connie Mack’s Athletics of Philadelphia in the nascent American League, and unlike some late-season pennant “races” of previous years, this was a pretty good one.

That’s not the way August “Garry” Herrmann saw it, though. Herrmann, owner of the Cincinnati Reds, was also “chief justice” of baseball’s National Commission—aka its “Supreme Court”—making him at least somewhat analogous to today’s baseball commissioner.[fn]John E. Bruce, “The Chief Justice of Baseball’s Supreme Court,” Baseball Magazine, 1912 February Vol. VIII No. 4 p. 53-54.[/fn]  The day before, Herrmann had seen fit to release to the press the details of the 1905 world’s championship series, which would definitely begin the following Monday in … Philadelphia. The series would move to New York the following day and alternate between the two cities until the seventh game, the location of which, if necessary, would be determined by the commission.[fn]“Dates for Great Series,” Chicago Daily Tribune, October 4, 1905.[/fn]

It was a fine plan that made a lot of logical sense, except for one minor detail: the Philadelphias had not yet clinched the pennant. Despite being two games behind with six left to play and widely considered the underdog, the White Stockings were still very much in it.

This, of course, did not escape the notice of Comiskey, who blasted Herrmann’s faux pas the following day:  “The action of the commission is an outrage,” said Comiskey. “If my club can cut down a lead of seven games to half a game in two weeks, why can’t they overcome a two and one-half [sic] games lead in one week? … Such action is hardly calculated to instill confidence in baseball managers and players when their rivals, whose lead is still possible to overcome, are declared the winners before they have won the pennant.”[fn]“Comiskey Denounces the Baseball Supreme Court,” The Inter Ocean, October 5, 1905.[/fn]

And then the kicker: “[The commission] have counted me out, and I must take the count. I will stay counted out no matter what happens, and have closed arrangements with the local National league [sic] club for the contingent post season series next week. No matter whether the Sox win the pennant or not they have already been counted out of the world’s championship series, and counted out they will stay … even though the Sox should yet win the pennant they will play the [Cubs] and let the officially declared winners, the Athletics, play the Giants as officially planned.”[fn]Ibid.[/fn]

Let’s consider this situation for a brief moment. It is well known among even casual baseball fans that the first modern “world’s championship series”—what we now know as the World Series—had been played for the first time only two seasons prior, and despite inconsistent attendance was a huge success. The Boston Americans shut out the “Pittsburg” Nationals 3–0 in the series’ clinching game “to the almost frenzied delight of 7,000 enthusiasts,” a contest which, even though the most sparsely attended of the eight Series games, evinced a “demonstration which followed [pitcher Bill] Dineen’s striking out of Hans [sic] Wagner in the ninth [that] equaled any college football game.” Afterwards, the victorious Americans were “borne to their dressing-rooms on the shoulders of thousands and the cheering lasted many minutes.”[fn]“Boston Americans World’s Champions,” The Inter Ocean, October 14, 1903.[/fn] The New York Times, the nation’s vaunted “newspaper of record,” unambiguously referred to Boston’s prize as being the “world’s baseball championship,”[fn]“Boston’s Champion Team,” The New York Times, October 14, 1903.[/fn] thus ratifying the Series’ claim to pre-eminence as the nonpareil title for the sport. 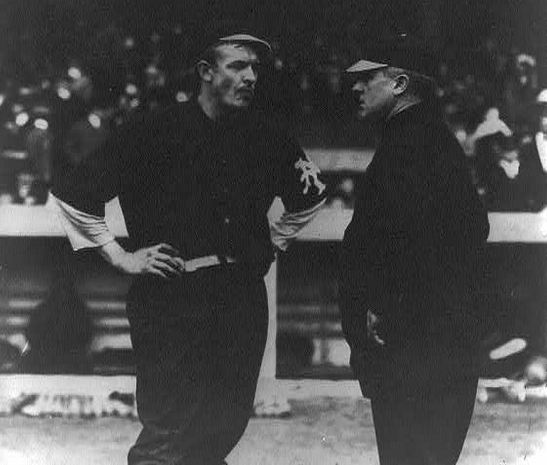 It is also well known that John McGraw, the leader of the National League’s 1904 pennant-winning New York Giants, refused to allow his team to play in a World Series against whichever American League team would qualify. The move was a testament to his hatred of American League president Ban Johnson, an animosity stretching back to McGraw’s tenure as the first manager of the league’s original Baltimore Orioles, which ended in July 1902 when Johnson suspended McGraw indefinitely for refusing an umpire’s ejection, and its subsequent walk in full view of the jeering cranks to the team’s clubhouse clear across the field.[fn]“M’Graw’s Action Commented Upon,” The Times (Philadelphia, Pennsylvania), July 14, 1902.[/fn]

McGraw immediately fled the team and the league, taking the helm of the Giants that same month[fn]Ibid.[/fn] and bringing his burning contempt for Johnson with him. McGraw’s disdain for the chief executive of the Junior Circuit wasn’t enough to keep “Muggsy” from agreeing to play in the 1905 Series, however; any lingering objections were likely overcome by the Giants players’ deep unhappiness at not being allowed to play for World Series money the year before.[fn]”Players Will Go After the Money,” The Minneapolis Journal, September 14, 1904.[/fn]

But now a crisis was emanating from the other direction. John McGraw had been brought into line (if only by the best interests of his players), but now it was Ban Johnson’s close friend and ally[fn]”What Every Fan Should Know: Ban Johnson and the Birth of the American League.” At Home Plate. Archived from the original on 2008-06-17. Accessed March 12, 2015. http://web.archive.org/web/20080617183524/http://www.athomeplate.com/alforms.shtml [/fn] Comiskey who was threatening to scotch the Series. Had the South Siders come from two games behind to win the pennant in the final week, a terrible dilemma would have loomed: would Baseball not have a championship series for a second year in a row, after having played a grand total of one to date? Or would Baseball follow Charlie Comiskey’s “advice” and play the Series anyway by installing the second-best team, the Athletics, in the AL champion’s rightful seat?

Either way, the risk to the credibility of the new championship series concept was substantial, because whether there was no Series to be played, or else a “world’s championship series” played without the actual champion of the American League, fans might well have thrown up their hands in frustration at the ensuing chaos and abandoned interest in the concept altogether, and then who knows what might have happened when the end of the 1906 season rolled around? For while it is true that the National Commission and the two leagues had adopted a formal agreement to play a post-season championship series during the previous offseason, no provision existed within that contemplated what would happen should one of the two league pennant winners simply refuse to participate.[fn]“RULES AND REGULATIONS GOVERNING THE CONTEST FOR THE PROFESSIONAL BASE BALL CHAMPIONSHIP OF THE WORLD”, Accessed March 12, 2015, http://roadsidephotos.sabr.org/baseball/1905WSregs.htm[/fn] If the White Sox came from behind to take the AL pennant and Comiskey had followed through on his threat, it could well have undermined this agreement and perhaps even rendered it void, the result of a lack of public and stakeholder confidence in the agreement’s enforceability and, ultimately, viability.

As it turned out, the entire issue became academic; both the White Sox and Athletics finished their seasons with three wins, two losses and a tie,[fn]Baseball-Reference.com 1905 Schedule and Results: 1905 Chicago White Sox, accessed March 12, 2015.[/fn],[fn]Baseball-Reference.com 1905 Schedule and Results: 1905 Philadelphia Athletics, accessed March 12, 2015.[/fn] securing the blessings of the pennant to the Athletics after all and ensuring that, indeed, the true champions of both leagues would meet for the championship. John McGraw’s Giants took the 1905 Series from the Athletics, making his players a little happier (and a little wealthier) while sticking it to his old nemesis Ban Johnson.

Charlie Comiskey had a happy ending of his own, too, as he presided over his White Stockings’ undisputed pennant win the following year. The 1906 champion Sox headed to the Series to play (ironically) the Chicago Cubs, the juggernaut whose winning percentage is still the highest in annals of the post-1900 major leagues,[fn]“List of best Major League Baseball season won-loss records,” accessed March 12, 2015, https://en.wikipedia.org/wiki/List_of_best_Major_League_Baseball_season_won-loss_records[/fn] and against whom the “Hitless Wonders” prevailed in a stunning six-game upset.

And so the hullabaloo over “chief justice” Garry Herrmann’s premature announcement regarding travel arrangements for the 1905 World Series was lost to history, completely forgotten, and never to be told again … until now.

CHUCK HILDEBRANDT has served as chair of SABR’s Baseball and the Media Committee since 2013 and has been a SABR member since 1988. Chuck lives with his lovely wife Terrie in Chicago, where as an ex-pat Tigers fan he compensates for his loss with Cubs season tickets.