This article was written by Walter Dunn Tucker

This article was published in The National Pastime (Volume 26, 2006)

In Bill Borst’s article ”A St. Louis Harbinger: The 1942 Browns,” in SABR’s Road Trips, a statement by Bill DeWitt about the reason for the trade of Roy Cullenbine to Washington leaped off the page. “Cullenbine wouldn’t swing the bat! Sewell would give him the hit sign and he’d take, trying to get a base on balls. Laziest human being you ever saw.” Borst went on to write that in his 10-year career Cullenbine amassed 1,072 hits and 853 walks, an amazing ratio for a player who didn’t lead off or hit for power.

The 2006 ESPN Baseball Encyclopedia revealed that Roy Cullenbine was a player ahead of his time. Through the close of the 2005 season, he was tied with Jeff Bagwell for 37th place on the all-time leaders in on-base per­centage (at least 1,000games) at .408. Hard-hitting Hall of Famers trailing Cullenbine’s OBP were:

There were five seasons in which both Roy Cullenbine and Joe DiMaggio played more than 100 games. On base percentages for those five sea­sons and for their careers were: 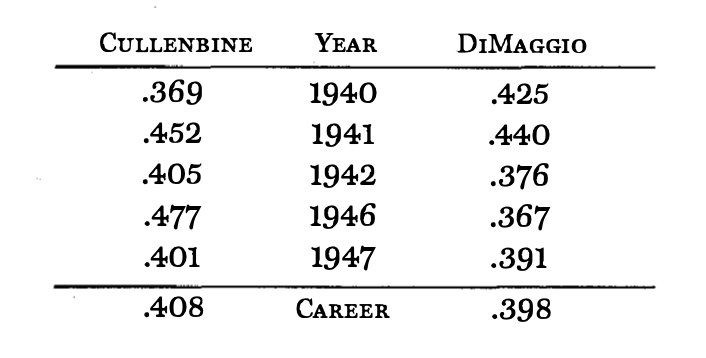 Does this show that Roy Cullenbine was a better hitter than Joe DiMaggio? Of course not. Two things are revealed. Cullenbine was underrated, and there’s a lot more to hitting than OBP.

WALTER DUNN TUCKER’s fate as a Cardinals fan was sealed on his 11th birthday by Whitey Kurowski’s ninth-inning homer to win the 1942 World Series.