This article was published in the Fall 2020 Baseball Research Journal 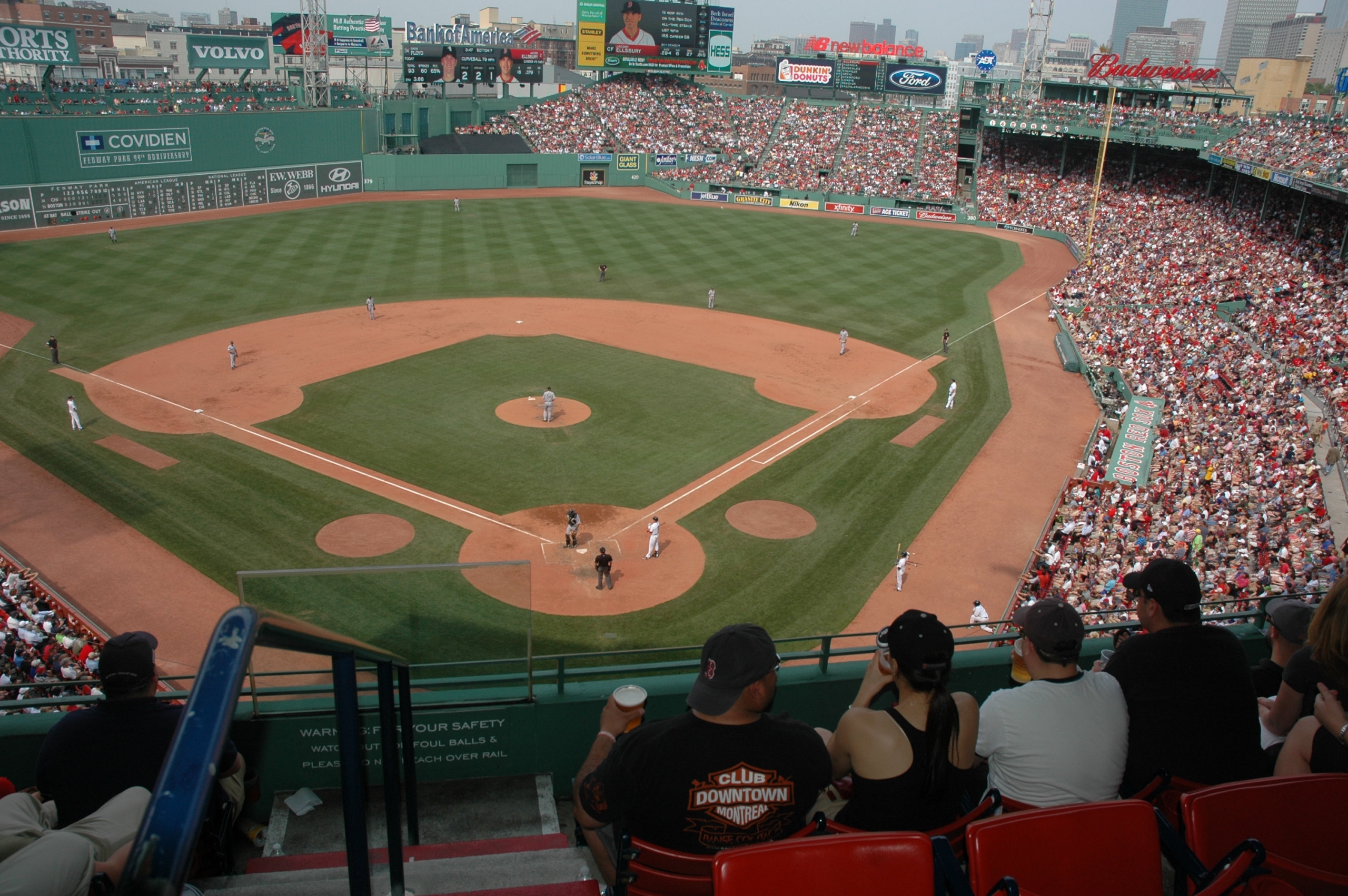 We know it didn’t come to pass, but when Fenway Park was less than 10 years old, there there was discussion of disposing of it. The park was opened in 1912 and at the time had hosted the world champion Boston Red Sox in four of its eight years—1912, 1915, 1916, and 1918. But in October 1919, respected sports journalist I.E. Sanborn wrote in the Chicago Tribune that “according to the most authentic information obtainable” there was a plan that—by a “process of amalgamation”—“two, and possibly three, major league base ball plants will be dismantled next season.”1

In New York, the Polo Grounds was shared by the National League Giants and the American League Yankees.2 Sanborn declared that other such sharing arrangements were imminent: “Before another season opens it is more than probable the St. Louis National league (sic) club will be sharing the plant of the St. Louis Browns and the Philadelphia Nationals will be under contract to play in Shibe Park, the home of the Athletics. It is within the scope of the possible that the Red Sox will amalgamate with the Braves, so as to cut down the overhead by occupying one plant jointly.”

In both St. Louis and Philadelphia, the two competing ballparks were fairly near each other and in each instance there were compelling reasons to dispose of one in favor of sharing a facility. This came to pass in St. Louis, where the Cardinals did start playing in Sportsman’s Park in 1920, leaving Robison Field. From 1920 through 1953, the Cardinals and Browns shared Sportsman’s Park. In 1953, the park’s name was changed to Busch Stadium. After the 1953 season, the Browns departed to Baltimore and became the Orioles. The Cardinals continued to play games at the newly-named Busch, into 1966 when they started to play games in Busch Stadium II.

The Phillies and Athletics ultimately did share Shibe Park, but it wasn’t for nearly two decades after Sanborn’s assertion.3 In 1938, the Phillies began to play home games at Shibe and did so through the 1970 season, long after the Athletics had departed for Kansas City, following the 1954 campaign.4

Returning to look at the situation in Boston, both parks were fairly new and both were sizable. Fenway Park’s capacity was 24,000—though they managed to shoehorn in more than 34,000 fans for both Games Three and Five of the 1912 World Series. Several blocks away, Braves Field opened in August 1915 with a much larger capacity of 43,250.5 The two clubs had shared facilities at times in the past. The Braves, for instance, played the 1914 World Series against the Philadelphia Athletics with Fenway Park as their home park, because it was the larger venue than the South End Grounds. They had played a number of regular season games at Fenway, too, before Braves Field itself opened in 1915.6 (Fenway also hosted boxing matches and both high school and college football in the fall of 1918 and 1919.) And the Red Sox played their home World Series games in the larger Braves Field both in 1915 against the Phillies and in 1916 against Brooklyn. In later years, the Red Sox would also play a number of Sunday games at Braves Field, because of a local ordinance that prevented them playing at Fenway due to its closer proximity to a house of worship.7

A ticklish situation exists in Boston, where both National and American league (sic) clubs are struggling to lift heavy overhead charges, due to the cost of their plants. The American league club, having built its plant several years ago, probably is in better condition as to its bonds than the National league is. Moreover, its grounds are better situated for commercial purposes, being in the heart of “automobile row,” but the American league park is better adapted to baseball because it is more compact than the plant occupied by the Braves.

The latter, with a seating capacity of 42,000 all on the ground level, is the biggest baseball plant in America, but it smothers the average crowd and stifles enthusiasm. It would be the rational solution, however, for the two Boston clubs to combine on the rental of the Braves’ park and dispose of the Red Sox grounds.8

On October 31, the Boston Post further reported that Red Sox owner Harry Frazee, Red Sox manager Ed Barrow, and James E. Gaffney of the Braves met in conference at Braves Field and “gave the place a thorough overlooking.” Because Fenway Park was “growing enormously valuable,” the Post declared, “In fact it has become far too hefty a real estate proposition to be used merely as a plant for baseball.”9 Combining under one roof was not a new idea. Melville E. Webb had published an article almost exactly a year earlier in the Post entitled “One-Park Baseball Likely to Come.” He declared the idea a good one.10 That same day, James C. O’Leary wrote in the Boston Globe that “The Fenway Park property is rapidly increasing in value and in time may be regarded as too valuable to be applied to its present use.”11

The day after the Post’s report of his visit to Braves Field, Frazee claimed the meeting was a coincidence, that he’d encountered Gaffney at a restaurant—never having met him before—and that it was the first time he’d ever seen Braves Field. He had no immediate intention of selling Fenway Park at the time; it would be at least two or three years, he thought, before he could realize enough to make it worth selling.12 Apparently Gaffney had proposed the two teams both play at Braves Field, but Barrow said Frazee was not going to accept the offer and that the Red Sox “will use Fenway two years more, anyway.”13

But Fenway changed hands early in 1920, with Frazee cutting a deal with a perhaps surprising source. In November 1916, when then Red Sox owner Joseph Lannin had sold the team to Frazee and Hugh Ward, he had taken a note for $262,000, which was secured by the capital stock of the Fenway Realty Trust, the company that owned Fenway Park. The note had come due on November 1, 1919, and had not been paid. Accordingly, Lannin was prepared to sell the stock at auction.14 Paul H. Shannon of the Boston Post wrote that Frazee “has always considered Fenway Park the chief asset of the Boston club, and many a time he has intimated that this land, increasing yearly in value, was the bulwark of the Red Sox assets.”15

That said, Lannin was owed the money. A number of court actions followed and Massachusetts Superior Court ruled that Fenway Park would be put up for sale via auction to secure payment to Lannin. The court ruling prompted Frazee to sell a mortgage on Fenway Park to Jacob Ruppert, owner of the New York Yankees, as part of the Babe Ruth deal.16 On March 5, 1920, a settlement was agreed upon. Jacob Ruppert, Inc. held a $300,000 mortgage on Fenway Park itself, not to be paid off until years later, after Tom Yawkey became owner of the Sox.17

The amalgamation Sanborn anticipated never came to pass and seems to have not attracted further comment or speculation in the Boston press. There was a brief note in the Denver Post, however, that said if the Red Sox team were sold “it is likely the new owners will abandon the Fenway park now used by the club. The grounds would be sold for other purposes.”18

The Braves and Red Sox played each in their own parks for the next 30-plus years. And 100 years later, Fenway Park still hosts Red Sox games.

BILL NOWLIN still lives in the same Cambridge, Massachusetts, house he was in when he joined SABR in the last century. He’s been active both in the Boston Chapter and nationally, a member of the Board of Directors since 2004 (a good year for Red Sox fans). He has written several hundred bios and game accounts, and helped edit a good number of SABR’s books.

1 I.E. Sanborn, “Major Leagues Plan to Cut Expense for Parks; Only One Field for Two Teams in Same Cities,” Chicago Tribune, October 20, 1919: 18. Irving Ellis “Sy” Sanborn” had been one of the founders of the Baseball Writers’ Association of America in 1908. Before working nearly 20 years at the Tribune, he spent dozen years in Massachusetts writing for the Springfield Union.

2 The Giants held the lease on the Polo Grounds, and the Yankees were a tenant; there was some form of paperwork in place to prevent the Giants from summarily evicting them. In February 1921, Yankees ownership would purchase land in The Bronx and Yankee Stadium would open on the site in 1923.

3 There had been occasional sharing, to accommodate circumstances. As Bob Davids noted, “When part of the Baker Bowl stands collapsed in a minor accident on May 14, 1927, the Phillies played a few home games at the Athletics’ field.” L. Robert Davids, “Baker Bowl,” SABR Baseball Research Journal, 1982. See https://sabr.org/journal/article/baker-bowl/

4 Shibe Park was renamed to Connie Mack Stadium in 1953.

5 Capacities are as noted in Philip J. Lowry, ed., Green Cathedrals, 5th edition (Phoenix: SABR, 2019), 47, 50. The Boston Braves did not own Braves Field. When James E. Gaffney sold the ballclub in early 1916, he retained ownership of the park. It was only in 1950 that then Braves owner Lou Perini purchased Braves Field from the Gaffney estate.

7 The Red Sox played Sunday home games at Braves Field from April 28, 1929 through May 29, 1932, as well as the occasional holiday separate-admission doubleheader, such as Patriots Day in 1930 and 1932. After a May 8, 1926, fire destroyed a good part of Fenway’s third-base seats, the Red Sox were offered use of Braves Field. They expressed their thanks but declined. James C. O’Leary, “Sox at Fenway Despite Fire,” Boston Globe, May 10, 1926: 8. Attendance for Red Sox games in the 1920 was sparse enough they didn’t need the extra capacity.

8 Sanborn. As to whether or not Sanborn was confused as to the location of “Automobile Row,” SABR member Bob Brady, president of the Boston Braves Historical Association, explained, “Automobile row extended from Kenmore Square down Commonwealth Ave. Probably both team’s homes would be logistically in close enough proximity to be so categorized.” Email to author July 20, 2020. See also Patricia L. Kennedy, “A Trip Down Automobile Row,” BU Today, October 20, 2011, at http://www.bu.edu/articles/2011/a-trip-down-automobile-row/

9 “Shift of Red Sox In Sight,” Boston Post, October 31, 1919: 15. The shift in question was from Fenway Park to sharing the facility at Braves Field.

10 Melville E. Webb, “One-Park Baseball Likely to Come,” Boston Post, October 31, 1918: 7. The notion of the Red Sox departing Fenway Park was probably not pure fancy, given the stories by both Sanborn and Webb which were published just over a year apart. Webb was, like Sanborn, well-connected and a charter member of the BBWAA. See Charlie Bevis, “Melville Webb,” SABR.org, at https://sabr.org/bioproj/person/melville-webb/

12 Paul H. Shannon, “Frazee Denies Moving,” Boston Post, November 1, 1918: 19. He said, “Braves Field is certainly one vast plant but I don’t think it would ever be the popular resort that Fenway Park has become.”

17 For a contemporary explanation of the mortgage, and how it was not that the New York Yankees held a mortgage on Fenway Park, see “Here’s Version of Red Sox Lawyer on Ruppert Mortgage,” Chicago Tribune, December 2, 1920: 18, and “No Connection with Club,” New York Times, December 2, 1920: 18. On the Yawkey purchase of the mortgage, see Bill Nowlin, Tom Yawkey: Patriarch of the Boston Red Sox (Lincoln: University of Nebraska Press, 2018), 7-10. In 1923, ownership of the Red Sox changed hands from Frazee to a group headed by Robert Quinn. See Rory Costello, “Bob Quinn,” SABR.org, at https://sabr.org/bioproj/person/bob-quinn/

18 “Boston Red Sox May Have New Park,” Denver Post, November 14, 1919: 30. See also “Ball Park May Be Given Up,” Oregonian (Portland, Oregon), November 24, 1919: 11. Why the possibility was being discussed in Chicago and cities further west, but there appeared to have not been more speculation in the Boston Globe is a little difficult to understand.