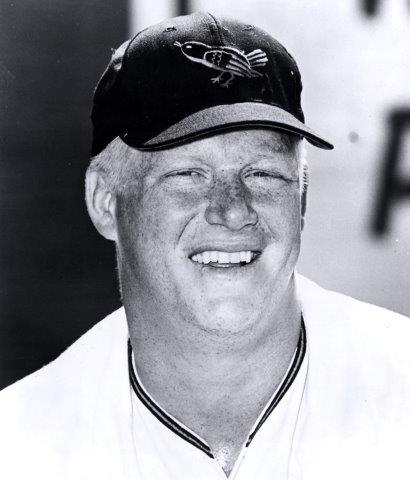 Baltimoreans strolling on Eutaw Street outside Oriole Park before a home game may stop for a bite to eat and kibbitz with owners of the establishments. It’s not an unusual sight. But one owner happens to be a civic icon—John Wesley Powell. Boog. The slugger who bashed 339 home runs in the majors does more than serve up mouth-watering food at Boog’s BBQ, though. He’s also an ambassador of good will. “I’m like, the official greeter at the ballpark,” said Powell in 2017. “People come looking for something positive, a confirmation about their own lives—and they find a guy standing there, smiling, and trying to make them happy. I want you to feel good when you leave me.”1

Powell saw the births of division playoffs and the designated hitter during his 1961–77 career, which ended with a .266 batting average and .462 slugging average. But for popular-culture buffs, Powell has the distinction of being a key part of a storyline in a first-season episode of Cheers.2 It involves a retelling of an Orioles-Red Sox doubleheader in 1972. But could events really have happened the way they’re explained in the dialogue?

Cheers aired on NBC from 1982 to 1993, focusing on the goings-on at a Boston bar owned by fictional former Red Sox relief pitcher Sam “Mayday” Malone. It used the famed Bull & Finch Pub for exterior shots. Adored by women in his “little black book” and idolized by men for his romantic exploits, Sam is a minor celebrity and a reformed alcoholic who suffers a relapse or two throughout the show’s run. Later in the series, he’s revealed to be a sex addict.

Sam’s career with the 1970s Red Sox occasionally becomes a topic of conversation in early episodes for the bar’s regular characters: wisecracking waitress Carla Tortelli, know-it-all postman Cliff Clavin, beer-guzzling accountant Norm Peterson, former pitching coach and good-natured but slightly unintelligent Ernie Pantusso, and high-brow waitress Diane Chambers. In the episode “Sam at Eleven” Sam recounts a memorable day in 1972, when he saved both games of a doubleheader against the Orioles on seven pitches.

Boston was five games out of first with eight to play. They couldn’t afford to lose a game. Malone retired Powell on a 5-3 grounder with two men on base and a one-run lead to end the first game. He faced the iconic slugger again in the bottom of the ninth with Don Buford on first base. Though the scene ends before a full recounting, it’s implied that Powell was not successful against “Mayday.”3

Indeed, a Baltimore-Boston doubleheader took place toward the end of the 1972 schedule. The Red Sox had 15 games left and a predicament more dire than the one Sam described—at the time, Boston was 76-64, Detroit was 77-66, and Baltimore was 77-66. After that, the resemblance to the fictional account quickly fades.

Neither game required a Red Sox reliever—Marty Pattin and Luis Tiant each pitched a complete game. Pattin was a formidable hurler in 1972, compiling a 17-13 record with 13 complete games and four shutouts.

In the first game, Powell left in the seventh inning; Terry Crowley moved from right field to take over first base. Unlike Sam’s tale, there was no significant danger for the Red Sox—they won the game 9-1. Veteran shortstop Luis Aparicio had 1 RBI and scored two runs, and rookie Dwight Evans went 2-for-4 with two RBIs; Carlton Fisk went 3-for-4 with three RBIs; and Pattin tossed a five-hitter. Boston escalated the pounding in the fourth inning, when they tagged Jim Palmer—a 21-10 pitcher in ’72—for two runs and extended the lead to 4-1.

Roric Harrison replaced Palmer and let in five runs (two charged to Palmer); Bob Reynolds came into the inning with one out and ended the destruction when Pattin grounded into an infield double play.4

In the second game, Tiant pitched a four-hit shutout and struck out seven Orioles in the 4-0 win. It was an emblem of an outstanding season—Tiant led the major leagues with a 1.91 ERA. The Sox were scoreless until the fifth inning, when Doug Griffin singled, Tiant advanced him with a sacrifice bunt, and Tommy Harper singled him home. Boston added two more runs in the seventh inning and another in the eighth. Four runs tallied on five hits.

Powell struck out to lead off the ninth. It was his last at bat of the doubleheader.5

In 1961, he thrashed International League pitching with the Rochester Red Wings and a .321 batting average. The Orioles elevated the slugger to Baltimore, where he played four games that year. From 1962 onward, he was a charm for Chesapeake Bay, until departing for the Indians in 1975–76. He ended his career in the National League with the Dodgers in 1977.

The AL East had a tight pennant race at the end of 1972. In early September, Powell reflected that the Orioles should have been ahead. “But look, I’m not hitting what I should, Donny Buford is only hitting .210, and Dave Johnson is batting only .224,” said Powell. “With the great pitching we are getting, if we were hitting like we should, we’d be out in front like always. That’s the only difference from last year.”6

Powell bashed a three-run homer in the Orioles’ 3-1 win against the Yankees on September 15. Complemented by “a vital relief lift from Grant Jackson and the defensive heroics of Bobby Grich,” the first-inning blast gave legendary hurler Jim Palmer his third straight 20-win season.7 Yankees pitcher Mel Stottlemyre walked Don Buford and Rich Coggins to begin the game, then got Grich out before the cleanup hitter and future food impresario tagged him for a 425-foot home run. Powell was on a streak—it was his third round tripper in four games.

Ultimately, the Tigers won the AL East pennant, beating the Red Sox by half a game and the Orioles by five games. And these days, Boog greets his regulars at Boog’s BBQ and cracks out the occasional story about his playing days, no fictionalizing needed.

DAVID KRELL is the editor of the anthologies “The New York Mets in Popular Culture” and The New York Yankees in Popular Culture.” He’s also the author of “Our Bums: The Brooklyn Dodgers in History, Memory and Popular Culture.” David’s contributions to SABR’s Baseball Biography Project include Johnny Podres, Bucky Dent, Joe Pepitone, Kurt Russell, and Harry Sinclair. David is the chair of SABR’s Elysian Fields Chapter (Northern New Jersey).