This article was written by William Guilfoile

This article was originally published in the 1991 SABR convention journal (New York City). 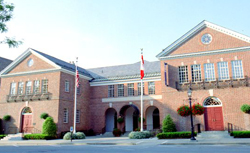 Visitors wonder why this small village of 2,300 inhabitants located in central New York state should be the homeof Baseball’s Exciting Showcase. The answer to this often-asked question involves a commission, a tattered baseball, a philanthropist and a centennial celebration.

The Mills Commission was appointed in 1905 to determine the origin of the game of baseball. The committee’s formation was urged by Albert G. Spalding, one of the game’s pioneers, following an article by Henry Chadwick, a famous early baseball writer, who contended that the sport evolved from the English game of rounders.

During its three-year study, the committee was deluged with communications on the subject. The testimony of Abner Graves, a mining engineer from Denver, Colo., in support of Abner Doubleday ﬁgured prominently in the committee’s inquiry.

Both Graves and Doubleday had attended school together in Cooperstown. Doubleday later was appointed to the U.S. Military Academy at West Point, graduating in 1842. Subsequently, he served in the Mexican and Civil wars. As a captain, he ﬁred the ﬁrst gun for the Union at Fort Sumter, S.C.

In his letters to Spalding, Graves claimed to have been present when Doubleday made changes to the then popular game of “Town Ball,” which involved 20 to 50 boys out in a ﬁeld attempting to catch a ball hit by a “tosser” using a four-inch ﬂat bat. According to Graves, Doubleday used a stick to mark out a diamond-shaped ﬁeld in the dirt; and his other reﬁnements ostensibly included limiting the number of players, adding bases (hence the name, “baseball”) and the concept of a pitcher and catcher.

The committee’s ﬁnal report on Dec. 30, 1907, stated in part that “the ﬁrst scheme for playing baseball, according to the best evidence obtainable to date, was devised by Abner Doubleday at Cooperstown, N.Y., in 1839.”

The discovery of an old baseball in a dust-covered attic trunk 27 years later supported the committee’s ﬁndings. In a farmhouse in Fly Creek, N.Y., a crossroads village about three miles from Cooperstown, were found the belongings of the aforementioned Graves and among his possessions was a baseball—undersized, misshapen and obviously homemade. The cover had been torn open, revealing stuffing of cloth instead of the wool and cotton yam which comprise the interior of the modem baseball; but it had a stitched cover. It soon became known as the “Doubleday baseball.”

Soon after its discovery, the baseball was purchased for $5 by Stephen C. Clark, a Cooperstown resident and philanthropist who had amassed considerable wealth through his association with the Singer Sewing Machine Company. Clark conceived the idea of displaying the baseball, along with other baseball objects, in a room in the Village Club, which now houses the Cooperstown village ofﬁces. The small one-room exhibition attracted tremendous public interest, and with the assistance of Alexander Cleland, who had been associated with Clark in other endeavors, support was sought for the establishment of a National Baseball Museum. Ford Frick, then president of the National League, was especially enthusiastic. He obtained the backing of Kenesaw Mountain Landis, baseball’s ﬁrst commissioner, and William Harridge, president of the American League. Contributions and priceless baseball memorabilia soon poured in from all parts of the country as the word spread.

Coincidentally, in 1935 plans also were being formulated for an appropriate celebration in Cooperstown to mark baseball’s upcoming 100th anniversary four years hence. Frick proposed that a Hall of Fame be established as part of the shrine to honor the game’s immortals.

The cooperation of the Baseball Writers Association of America was enlisted to select the playing greats who were to be honored. The ﬁrst election was conducted in January 1936 and ﬁve players were named—Ty Cobb, Babe Ruth, Honus Wagner, Christy Mathewson and Walter Johnson. The National Baseball Hall of Fame and Museum was ofﬁcially dedicated in colorful ceremonies on June 12, 1939.

The game’s four ranking executives of the period—Landis, Frick, Harridge and William G. Bramham, president of the National Association of Professional Baseball Leagues—participated in the ribbon-cutting. Of the 25 immortals who had been elected to the Hall of Fame to that point, 11 were still living and all of them journeyed to Cooperstown to attend the centennial celebration. A baseball postage stamp commemorating the occasion was placed on sale that day at the Cooperstown post ofﬁce, with Postmaster General James A. Parley presiding.

Another Clark associate, Paul S. Kerr, played a major role in the growth and expansion of the baseball shrine. Kerr was elected treasurer in 1943 and served as president from 1960 (the year of Clark’s death) until his retirement in 1977.

Edward W. Stack, former secretary of the museum, succeeded Kerr as president and, with the help of Howard C. Talbot Jr., Hall of Fame director since 1976, he spearheaded two major expansion/ renovation programs, the most recent of which was completed on June 10, 1989. Between the original dedication in 1939 and the completion of the new annex 50 years later, several significant developments had taken place. New wings were dedicated on July 24, 1960, and on May 10, 1980, and the Hall of Fame Gallery was dedicated on Aug. 4, 1958. The National Baseball Library opened its doors on July 22, 1968.

Annual attendance at the Hall of Fame and Museum regularly exceeds 300,000. The shrine is open year round, and during July and August it is not unusual for the daily turnstile count to exceed Cooperstown’s population.

The biggest day of the year, of course, is Hall of Fame Day, when the newly elected members are inducted. Ceremonies are held on the library steps facing Cooper Park. The Commissioner of Baseball conducts the installation with many league executives, club ofﬁcials and previously inducted Hall of Famers participating in the emotion-packed program, witnessed by thousands of baseball fans from all over the United States and Canada.

The next day, two major league teams representing each league clash in the annual Hall of Fame Game at Doubleday Field. The ball ﬁeld, just a block from the museum, is located on the former Elihu Phinney cow pasture where baseball is believed to have been ﬁrst played more than a century ago by Doubleday and his friends. The village Board of Trustees transformed the erstwhile pasture into a ballpark of major league specifications in 1939, and it now seats approximately 10,000 fans.

From time to time over the years, various critics have challenged the speculation on Doubleday, although most of the original documentation was lost in a ﬁre in 1916. Abner Graves’ credibility as a reliable witness has been questioned and Doubleday’s diaries, surprisingly, made no mention of baseball. Some argue that Doubleday was not away from West Point at all in 1839, and to further complicate the situation, still others claim that there were two Abner Doubledays. Many of these contradictory theories have been well documented by their proponents. Whatever may or may not be proved in the future concerning baseball’s true origin is in many respects irrelevant at this time. If baseball was not actually ﬁrst played in Cooperstown by Doubleday in 1839, it undoubtedly originated about that time in a similar rural atmosphere. The Hall of Fame is in Cooperstown to stay, and at the very least, the village is certainly an acceptable symbolic site.