This article was written by Randolph Linthurst

This article was published in 1974 Baseball Research Journal 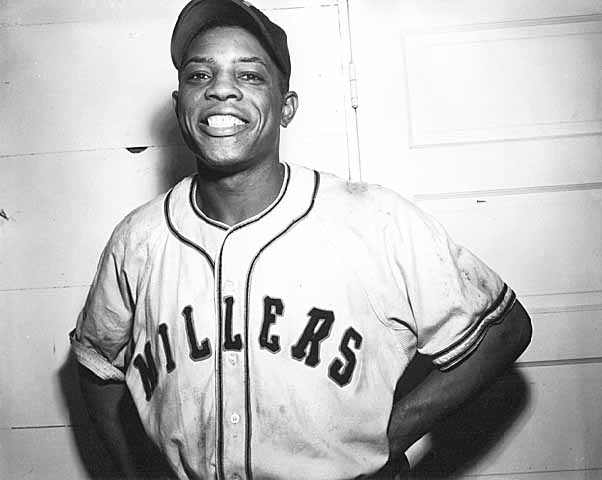 Willie Mays smiles during the spring of 1951 shortly before his call-up to the major leagues. After hitting .353 with four home runs in his first season with the Class B Trenton Giants in 1950, he was batting .477 with the Minneapolis Millers in the first month of the 1951 season when he was called up to the New York Giants for good. (MINNEAPOLIS PUBLIC LIBRARY)

“The first time I saw Willie Mays in the outfield, I knew he had the greatest throwing arm that I would ever see.” These were the words of Maurice (Mo) Cunningham, a hard-hitting minor league outfielder some 20 years ago. “His accuracy was the big thing,” recalls Cunningham. “A lot of players throw hard, but he never was more than a foot off the base.”

Cunningham was the center fielder on the Trenton Giants, a New York Giant farm team in the Class B Inter State League at the outset of the 1950 season. On June 24, a new player, 19-year-old outfielder Willie Mays joined the club in Hagerstown, Md., and was immediately inserted in center field by Manager Chic Genovese.

In his first game in organized ball, Mays went hitless, but exhibited exceptional speed and an excellent throwing arm. Two nights later, Mays played his first game in Trenton, rapping out two hits in helping defeat York, 4-3. What dazzled the 1,321 spectators, however, was Willie’s play in the field.

Three of his five putouts were remarkable catches, with throws to third base and home plate illustrating his exceptional throwing arm. In the third inning, he sped backward and leaped high enough to spear a long fly with his bare hand, much to the amazement of the onlookers. It was quickly realized that an unusually gifted player had joined the Trenton team.

Although his first season was spectacular in several phases of baseball, Mays showed very little power, connecting only four times for home runs. His first was hit on June 28 in Sunbury, Pa., a grand slam in a 21-8 win.

“He wasn’t a vicious hitter then,” says Cunningham, who moved over to left field when Mays joined the team. “He was still a boy and didn’t have a man’s muscular development.”

Cunningham also recalls that he and Mays were taught together the basket catch that year by Genovese and Mays quickly became adept at it.

Another teammate of Mays in 1950 was Len Matte, a catcher. “Mays had the tools then, no question about it,” recalls Matte. “He showed us right away that he had the instinct to take off as soon as the ball was hit and just keep running until he caught it. Very few in the majors can do that.”

“We all wondered, however, if he could hit,” added Matte. “When he first joined our club, Willie didn’t look too good at bat.  He wasn’t pulling the ball and was hitting to right field a lot. He hit mostly singles and doubles then. He was a skinny kid and weighed only about 160 pounds. You must also remember that the Inter State League had some of the biggest ball parks in the country, 350 feet down the line and eight-foot walls.”

Bill Forst, a right-handed pitcher for the Lancaster Red Roses, the Brooklyn Dodger farm team in the league back in 1950, says “Mays was green, but had a fine arm and could run. I had little trouble with him, however, and he didn’t do much against our team. He was afraid of the sidearm fastball. I’d brush him back and then keep the pitches away from him. I was really surprised when Mays started hitting all those home runs in the big leagues. Cunningham was a much more fearsome batter in 1950.”

During the 1950 season, Mays appeared in 81 games, batting at a .353 clip. One interesting side note of Mays’ season at Trenton is that he might have become a pitcher. When the Giants signed him, they felt that if he didn’t hit, he might make it on the mound with his excellent arm. Mays, however, was never given the opportunity to exhibit his ability as a pitcher. He was too busy becoming one of the all-time great outfielders.

Below is Willie Mays’ complete batting record and fielding record in his first season in the minor leagues.