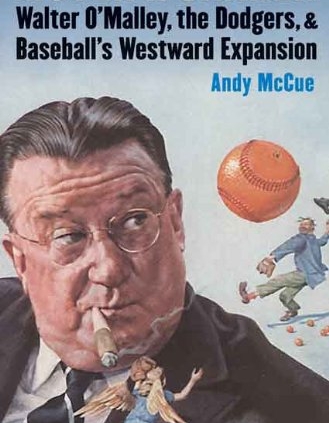 Mover & Shaker: Walter O’Malley, the Dodgers, and Baseball’s Westward Expansion, written by past SABR President Andy McCue and published by the University of Nebraska Press, is the winner of the 2015 Dr. Harold and Dorothy Seymour Medal, which honors the best book of baseball history or biography published during the preceding calendar year. 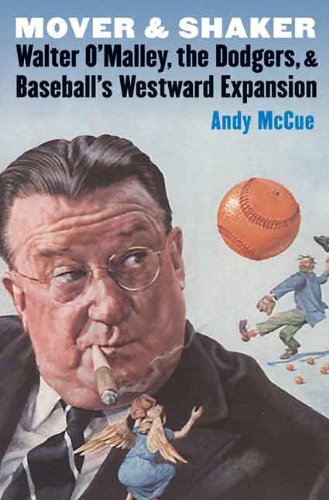 McCue, a former business journalist and professor who resides in Riverside, California, will receive his award at the banquet of the 22nd annual NINE Spring Training Conference on Saturday, March 14, 2015, at the DoubleTree by Hilton Hotel in Tempe, Arizona (formerly the Fiesta Inn and Resort.)

The banquet includes the Seymour Medal ceremony with Dorothy Seymour Mills, dinner, and the NINE keynote address by SABR member Terry Cannon, founder and Executive Director of the Baseball Reliquary, a California-based nonprofit dedicated to fostering an appreciation of American art and culture through the prism of baseball history. To register for the NINE conference, visit nineregistration.com.

The winner of the 2015 Seymour Medal is Mover & Shaker: Walter O’Malley, the Dodgers, and Baseball’s Westward Expansion by Andy McCue, published by University of Nebraska Press. McCue covers all the important elements in the life of the legendary and controversial baseball executive from his birth in the Bronx, New York, in 1903 to his death at the Mayo Clinic in Rochester, Minnesota, in 1979.

The biography presents a balanced account of O’Malley’s life and career, most notably the issues and events leading to O’Malley’s move of the Dodgers from Brooklyn to Los Angeles, bringing Major League Baseball to the West Coast, and the building of Dodger Stadium. Thoroughly researched, the book is comprehensive in tracing O’Malley’s rise to President and Principal Owner of the Dodgers and one of the most influential men in baseball and all sports.

McCue’s book, the result of years of research, benefits from a wide-ranging number of resources. It is sure to be the primary reference regarding O’Malley.

“As a journalist, you love it any time you can find a story in which you upset people’s perceptions (of a subject),” McCue said. “When I started looking into his story about 20 years ago, everyone just ripped on O’Malley, all the time. But I thought there was a lot more to his life than just the move. … His story plays a significant role in a lot of different aspects of the game.”

McCue, who worked as a reporter, editor, and columnist at The (Riverside) Press-Enterprise for nearly two decades and later taught at the University of California-Riverside, said that even though he grew up as a Los Angeles Dodgers fan, he approached this book without any strong feelings for the team’s departure from Brooklyn.

“I guess (growing up as a fan) colors you to some extent,” McCue said. “But I find that the biggest fans can be extremly objective. When a player makes an error, they’re not the ones patting him on the back. … Every journalist brings some skepticism to the process. You get in the habit of re-examining your perspective. It becomes part of how you work and how you view the world.”

McCue noted that he had the benefit of a “gold mine” of available resources in his research, including the Branch Rickey Papers at the Library of Congress, the Robert Moses Papers at the New York Public Library, and “all the newspapers I could find.” One resource he wishes he had, however, was the cooperation of the O’Malley family.

“The book could have been a richer presentation (with their cooperation),” McCue said. “There are a lot of holes in the early family history. Things aren’t as well explained as they could be. There was enough interesting material elsewhere, but there are several people who I really wanted to talk to and couldn’t.”

McCue was a recipient of the Bob Davids Award, SABR’s highest honor, in 2007. He served on SABR’s Board of Directors from 2002 to 2011, including the last three years as President.

The other finalists for the 2015 Seymour Medal were: