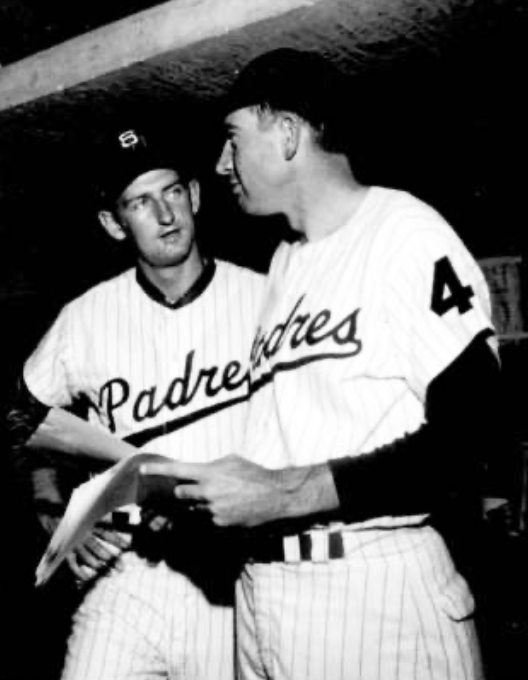 In 1997 the San Diego Padres and San Diego Baseball Historical Society published the first two volumes of a trilogy about the Padres of the Pacific Coast League. They were known as the Lane Field Years: 1936-1946 (Volume I) and 1947-1957 (Volume II.) Remarkably, these books became expensive collectors items.

Volume III, The Westgate Years: 1958-1968, was completed in 1998, but never published. Ray Brandes, the primary author and founder of the SDBHS, died in 2014. The Society had expired years earlier.

The manuscript, photographs, and disks remained in the possession of Dave Rossi, SDBHS’ last president, who realized Volume III would never be published. Since the SDBHS no longer exists, Dave donated this material to me in 2022.

My goal as a baseball historian is to preserve the history of baseball in San Diego, and 1958 through 1968 represented a significant gap in the Padres’ timeline.

To complicate the project, Zip 100 disks were state-of-the-art technology in 1998, but they are incompatible with modern computers.

Carlos Bauer and Tom Larwin are highly respected local historians. When I told them about The Westgate Years, they immediately offered to scan the printed manuscript and re-size the photos to create a digitized version of the book.

Several pictures were missing or misidentified for placement in the book. Fortunately, I had collected most of the Westgate Park photos and was able to replace 33 of the missing 41.

Since our primary purpose was publication, a lengthy editing process for errors and omissions was not attempted.

Ironically, and most unexpectedly, this was an opportunity to complete a project that I helped start almost 30 years ago.

Thanks to Dave Rossi, Carlos Bauer, Tom Larwin, and the San Diego Ted Williams Chapter of SABR — here finally is the history of The Westgate Years … as told by Ray Brandes.