The Eighth Wonder of the World: The Life of Houston’s Iconic Astrodome, written by Robert C. Trumpbour and Kenneth Womack and published by University of Nebraska Press, is the winner of the 2017 Dr. Harold and Dorothy Seymour Medal, which honors the best book of baseball history or biography published during the preceding calendar year. 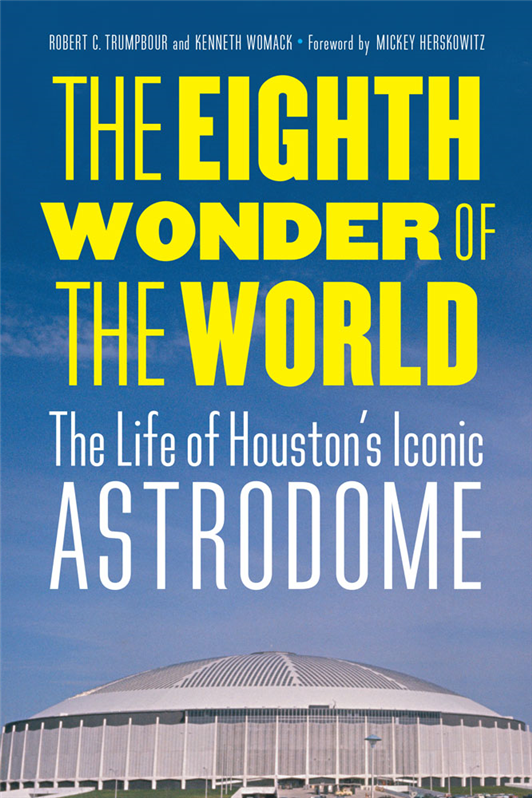 Trumpbour and Womack will receive their award at the banquet of the 24th annual NINE Spring Training Conference on Saturday, March 4, 2017, at the DoubleTree by Hilton Hotel in Tempe, Arizona.

The banquet includes the Seymour Medal ceremony with Dorothy Seymour Mills, dinner, and the NINE keynote address by SABR member Adrian Burgos Jr., an acclaimed author and historian of Latino baseball and the Negro Leagues. To register for the NINE conference, visit nineregistration.com.

Trumpbour and Womack’s The Eighth Wonder of the World raises the bar for future ballpark and stadium histories. In a book that is well-researched, well-written, and well-documented, the authors demonstrate the Astrodome’s role in transforming Houston from an oil and cow town to a world-class city and consider the iconic stadium’s impact on all subsequent stadium construction.

Trumpbour, a SABR member since 2000, said the Astrodome will always occupy a special place in the evolution of Houston as an international city.

“The Astrodome was a game-changer,” he said. “It’s such a dramatic contrast, the center point between the new versus the old in the trajectory of how ballparks were constructed.”

Trumpbour is an associate professor of communications at Pennsylvania State University at Altoona and the author of The New Cathedrals: Politics and Media in the History of Stadium Construction. Womack, whose grandfather Ken Zimmerman was the Astrodome’s structural engineer, is the dean of the Wayne D. McMurray School of Humanities and Social Sciences and a professor of English at Monmouth University.

Trumpbour said they decided to start working on the project as the 50th anniversary of the Astrodome’s opening approached. With his “fanatic” interest in ballpark history and Womack’s Texas roots, their partnership was a true collaboration.

“(Winning the Seymour Medal) is unbelievable news. What an honor,” Trumpbour said. “The books that have been picked for that award are absolutely pheonomenal. I’m blown out of the water just thinking about it.”

The other finalists for the 2017 Seymour Medal were: