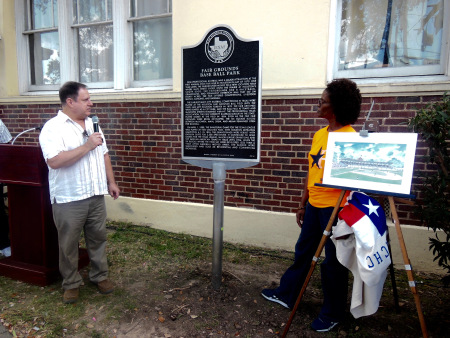 Behind the efforts of Houston historian/Master of Ceremonies Mike Vance, the Harris County Historical Commission, and the Texas Historical Commission, the plaque that memorializes Fair Grounds Park, at the block bordered north and south by Milam to the west and Travis to the east, and east west at its northern boundary by McGowen in the Midtown area of Houston, is now done. The featured plaque went up as planned on Saturday, February 20, 2016 at 11:00 AM before a small and genteel crowd of avid preservationists and baseball history fans.

According to Mike Vance, seven individual proclamations were received in support of the marker dedication: Harris County Judge Ed Emmett, Houston Mayor Sylvester Turner, Governor Greg Abbott, Congresswoman Sheila Jackson Lee, Senator Ted Cruz, State Senator John Whitmire and State Representative Garnett Coleman all sent notices of support that Saturday was dedicated by them all as “Fair Grounds Base Ball Park Day in Houston and the State of Texas.” And, as Mike Vance also notes on his Facebook page, this was a united show of four Democrats and three Republicans.

Thanks go out to Greg Jacobsen, the owner of the property that now occupies and uses the land that once hosted the Fair Grounds Base Ball Park for more contemporary commercial purposes. Without his supportive permission to the premises installment of the historical marker today, this beautiful moment in time could not have happened.

Click here to view more photos and read a complete recap at The Pecan Park Eagle.