Ken Griffey Jr. and Mike Piazza were announced as the newest inductees to the National Baseball Hall of Fame on January 6, 2016. 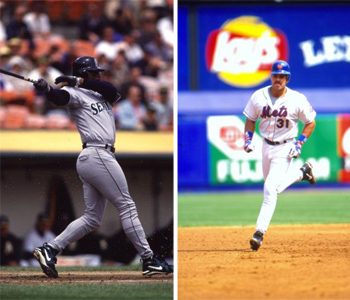 Griffey, the charismatic center fielder for the Seattle Mariners and Cincinnati Reds with the sweetest swing in baseball, received a record-setting 99.3 percent of the 440 ballots cast by the Baseball Writers’ Association of America, missing out by three votes as the first unanimous selection in the Hall of Fame’s history. The previous record holder was Tom Seaver, who was named on 98.8 percent of BBWAA ballots in 1992.

Piazza, the power-hitting catcher for the Los Angeles Dodgers and New York Mets, received 365 votes (83 percent) in his fourth year on the ballot. He is just the 16th player at his position to make it to Cooperstown.

Houston Astros first baseman Jeff Bagwell fell 15 votes shy of the required 330 for election, finishing with 71.6 percent. Outfielder Tim Raines received 69.8 percent in his ninth year on the ballot, while San Diego Padres closer Trevor Hoffman garnered 67.3 percent in his first year. The only other player to be named on more than half the ballots was pitcher Curt Schilling (52.3).

Find all published SABR biographies for Baseball Hall of Fame inductees — including the Class of 2016 — by clicking here.