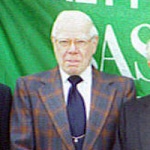 Bob McConnell, 87, one of SABR’s founding members and a renowned expert on home runs and baseball’s minor leagues, passed away on Sunday, March 18, 2012, at the Christiana Hospital in Newark, Delaware.

A longtime power plant engineer with Delmarva Power & Light Company in Wilmington, McConnell — along with 15 other researchers led by SABR founder L. Robert “Bob” Davids — attended the Society’s first organizational meeting on August 10, 1971, at the National Baseball Hall of Fame Library in Cooperstown, New York. Davids was selected as the president of SABR, while McConnell became its first secretary and treasurer. In the early days, everybody pitched in to help out on a new project or an administrative matter. McConnell served as a board member for eleven years during this formative period, and was an active participant in pretty much everything SABR undertook during those years. He remained involved with SABR for more than four decades afterward and regularly attended the Society’s national convention, including last year’s SABR 41 in Long Beach, California.

In 1981, McConnell took over the SABR Home Run Log after John Tattersall’s death in 1981. One of SABR’s most ambitious projects, the Home Run Log was the creation of a database that details every major league home run ever hit. McConnell was a key ally on this initiative, filling in many of the gaps in the records. McConnell insisted that it was Tattersall who “should be credited with the bulk of the work.” In 1996, SABR published SABR Presents The Home Run Encyclopedia, fulfilling Tattersall’s dream of a large-scale home run register. The SABR Home Run Log, now maintained by David Vincent, is available for everyone to view at Baseball-Reference.com. (Go to any player’s page and click the tab that says “Home runs” to access the data.)

“Today’s researchers take for granted the completeness of the statistical record that is now available at the click of a mouse,” author Peter Morris wrote in his SABR Baseball Biography Project biography of McConnell in 2008. “But we need to recognize that we have that vantage point because we stand on the shoulders of giants like Bob McConnell who put in countless hours of work to make that possible.

McConnell’s second research passion also came out of the many afternoons he spent watching the greats of the International League. Along with Ray Nemec, Vern Luse and Bob Davids, he became one of the principals in another ambitious effort that aimed to create complete statistical records for the greatest minor league players. The project proved so successful that SABR eventually published three volumes of the Minor League Stars series, along the way directing new attention to “Buzz” Arlett and the other luminaries of the golden age of the minors.

A member of SABR’s Philadelphia and Washington-Baltimore regional chapters, McConnell was the first recipient of the Bob Davids Award, SABR’s highest honor, in 1985. He was the author of Going For The Fences: The Minor League Home Run Record Book and wrote several articles for the Baseball Research Journal.

Robert Churchill McConnell was born on January 18, 1925, in Seattle, the son of a sea captain and a former World War I nurse. The family moved frequently while he was young, and portions of Bob’s childhood were spent in Oregon, New Mexico, California, Massachusetts, and New York City before the family finally settled in Newark, New Jersey, in 1935. One of the constants in each new location was a love of baseball, which proved a good way of making new friends. When Bob arrived in Newark, he found that many of his new schoolmates were also baseball nuts, and that helped him feel right at home. He soon became an avid fan of the local Newark Bears, one of the legendary minor league franchises.

At 17, McConnell joined the U.S. Navy in 1942 and spent the next three years on two ships: the U.S.S. Whitman, a destroyer, and the U.S.S. Mifflin, an attack transport. In July of 1945, just before the end of the war, McConnell was selected for officer training and was sent to Vanderbilt University. He was discharged from the Navy in January of 1946, but continued at Vanderbilt under the G. I. Bill. He graduated in the spring of 1949 with a Bachelor of Science degree in mechanical engineering. Later that year, he married Mildred “Millie” Cooper.

McConnell was hired straight out of college to work as a start-up service engineer for Combustion Engineering. The job involved the construction of new power plants, so as soon as one job was done, he was on to a new location. Over the next four years, he was traveling all the time, never spending more than a few months in one spot. Millie gave birth to the couple’s first son, Daniel, in 1952 while they were living in a house trailer. A second son, David, completed the family a few years later.

McConnell was hired as a power plant engineer by Delmarva Power & Light Company in Wilmington on April 1, 1953. It proved the perfect fit, and he  remained in the position until his retirement in 1983 on the thirtieth anniversary of his hiring. He was a member of the YMCA for more than seventy-five years, enjoying his lifelong passion for physical fitness.

A Celebration of Life will be held at 11 a.m. on Friday, March 23 at the Chandler Funeral Home, 2506 Concord Pike in Wilmington, Delaware. Friends may visit with the family one hour prior at the funeral home.

In lieu of flowers, donations may be made to the Central Branch of the YMCA, 501 West Eleventh Street, Wilmington, DE 19801. For online condolences, please visit ChandlerFuneralHome.com.