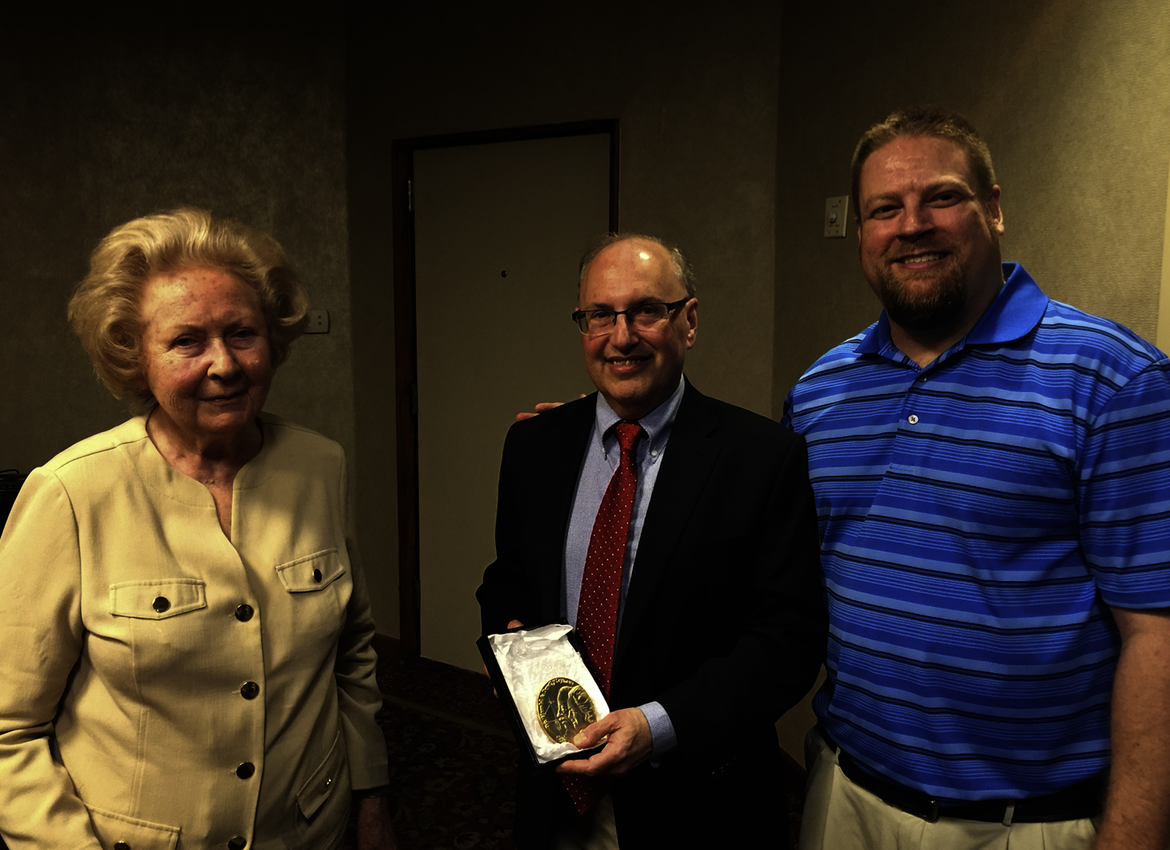 2018 Seymour Medal winner Jerald Podair, author of City of Dreams: Dodger Stadium and the Birth of Modern Los Angeles , accepted his award at the banquet of the 25th annual NINE Spring Training Conference on Saturday, March 3 in Tempe, Arizona.

The Seymour Medal honors the best book of baseball history or biography published during the preceding calendar year. Podair’s book was published by Princeton University Press. The Seymour Medal, named in honor of Dr. Harold Seymour and Mrs. Dorothy (Seymour) Mills, was first awarded by SABR in 1996. Podair was presented with his medal at Saturday evening’s banquet by Dorothy Seymour Mills and SABR’s Jacob Pomrenke.

“Dorothy and Harold Seymour’s work changed the study of history, something very few historians can say they were able to do,” Podair said. “They changed me, too — and made it possible for me to be standing here with you tonight. And I’ll always be grateful to you for that. I’m also grateful to SABR, a truly welcoming community, where everyone who loves the greatest game in the world, has a home.”

Hosted by NINE: A Journal of Baseball History & Culture, the NINE Spring Training Conference promotes the study of all historical aspects of baseball and centers on the cultural implications of the game wherever in the world baseball is played. The NINE Conference banquet included a panel discussion on the Dodgers and Giants moving west in 1958 with Podair, along with fellow Seymour Medal winners Lee Lowenfish (2008) and Andy McCue (2015) and author Rob Garratt. Other highlights of the conference included a conversation with former major-league manager and All-Star outfielder Felipe Alou, whose new book Alou: My Baseball Journey was co-authored with Peter Kerasotis, and a film screening of The Sweet Spot by documentarian Jon Leonoudakis.

Research presentations at the NINE Conference included “Baseball and Advertising in the Era of Mad Men” by Roberta Newman; “All in Good Fun? The Emasculating Rituals of MLB Players” by Allison Levin; “Cubs Fans and the World Series Ticket Scandal of 1908” by Jason Cannon; and “From Deadball to Techball: The Evolution of Baseball Innovation” by Dan Levitt.

View a photo gallery from the Seymour Medal Banquet below (or click here to view on mobile devices):