Oscar Charleston: The Life and Legend of Baseball’s Greatest Forgotten Player, written by Jeremy Beer and published by the University of Nebraska Press, is the winner of the 2020 Dr. Harold and Dorothy Seymour Medal, which honors the best book of baseball history or biography published during the preceding calendar year. 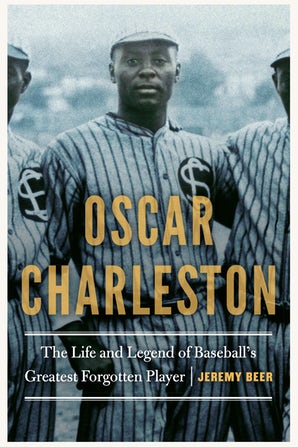 Beer will receive his award at the banquet of the 27th annual NINE Spring Training Conference on Saturday, March 7, 2020, at the DoubleTree by Hilton Hotel in Tempe, Arizona.

The banquet includes the Seymour Medal ceremony, dinner, and the NINE keynote address by Ron Rapoport, author of Let’s Play Two: The Legend of Mr. Cub, the Life of Ernie Banks. To register for the NINE conference, visit nineconference.com.

Jeremy Beer has broken new ground with his thorough and painstakingly well-documented book, Oscar Charleston: The Life and Legend of Baseball’s Greatest Forgotten Player. Beer not only does the requisite review of the “one of the greatest ever to play the game” claims made by various teammates and students of the game (Bill James ranked Charleston as the fourth best player all-time behind Babe Ruth, Willie Mays, and Honus Wagner; Buck O’Neil called him “Ty Cobb, Babe Ruth, and Tris Speaker rolled into one”), but he makes the case for his stature as one of the smartest, and respected leaders of the game during his time playing, managing, and scouting in professional baseball. This is an important book, not only covering one of the greatest and most influential players ever to have played the game, but hopefully leading the way to more comprehensive biographical treatments of players who only played in the Negro Leagues.

Beer, a SABR member since 2015, is a founding partner at American Philanthropic in Phoenix, Arizona, and the author of The Philanthropic Revolution: An Alternative History of American Charity. He wrote “Hothead: How the Oscar Charleston Myth Began” for the SABR Baseball Research Journal in 2017.

He said Charleston’s “unique resume” was a story that was long overdue in being told.

“Oscar was one of the greatest athletes in American history and he deserves to be remembered for that,” Beer said. “He has a legitimate claim as one of the best all-around, five-tool players of all time, up there with Willie Mays, Barry Bonds, and Mike Trout. And he was so special with the other roles he played in the game, too, as a manager and a pioneering scout.”

The other finalists for the 2020 Seymour Medal were: