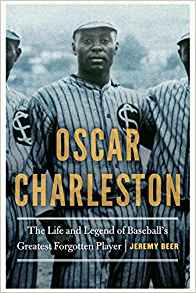 As we approach the 100th anniversary of the founding of the Negro National League, come hear Nick Piecoro, Diamondbacks beat writer for the Arizona Republic, discuss the legacy of the Negro Leagues and its best all-around player, Oscar Charleston, with SABR member Jeremy Beer, author of the new biography, Oscar Charleston: The Life and Legend of Baseball’s Greatest Forgotten Player.

The event is free and open to all baseball fans.

Attendees are asked to consider making a tax-deductible donation in support of SABR and our Negro Leagues Grave Marker Project, which funds headstones for Negro Leagues players buried in unmarked graves.

Those who make a donation of $150 or more are invited to attend a free private dinner at Southern Rail, located next door to Changing Hands, immediately afterward with Piecoro, Beer, SABR CEO Scott Bush, and members of the SABR staff. Click here to make a donation online.

If you plan on attending this event, please RSVP to brose@sabr.org by Friday, November 8.

Who was Oscar Charleston?

Oscar Charleston was the Negro Leagues’ most popular and widely admired superstar. His combined record as a player, manager, and trailblazing scout makes him the most accomplished figure in black baseball history. And his mastery of the quintessentially American sport under the conditions of segregation revealed what was possible for black achievement, bringing hope to millions. This event will introduce attendees to the Negro Leagues and one of America’s greatest and most fascinating athletes.