Baseball fans, you're not going to want to miss the fifth annual SABR Day on Saturday, January 25, 2014! 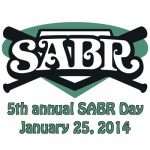 SABR Day is our annual Hot Stove gathering to celebrate the beginning of a new baseball season. It's always held on the weekend between the NFL championship games and the Super Bowl. On that day, SABR's regional chapters organize baseball events around the globe, and you're all invited to attend.

Some SABR chapters, such as those in Austin, Des Moines, Indianapolis, Montreal and Victoria, are meeting informally at a restaurant or library just to talk baseball or present their new research. Other chapters, such as Houston, Minneapolis and Dallas-Fort Worth, will participate in their local MLB team FanFests scheduled for Saturday.

In Boston, we'll have a book signing and discussion with the authors of SABR's newest Digital Library publication, New Century, New Team: The 1901 Boston Americans.

In Denver, we'll follow up the SABR Day Media Panel with our traditional mass game of catch in the parking lot at nearby Coors Field.

The Chicago and Milwaukee chapters plan to meet in the middle — at the Brat Stop in Kenosha, Wisconsin — for a meeting with guest speakers Christopher Kamka of Comcast Sportsnet, Kane County Cougars announcer Wayne Randazzo, and Jake McGhee, General Manager of the Kenosha Kingfish.

All baseball fans are welcome on SABR Day; you don't have to be a SABR member to attend, although if you like what you see we hope you'll sign up.

You can find details of all 30+ SABR Day 2014 meetings at SABR.org/sabrday. Find one near you and join us!

To view all SABR Day 2014 events on a map, click here or click the image at the top of this page.