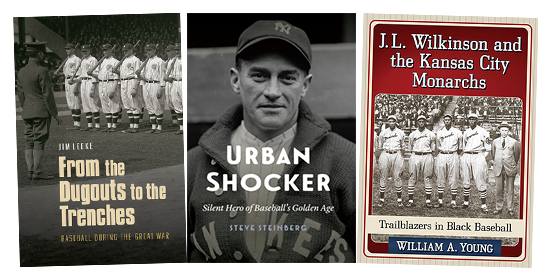 The 2018 SABR Baseball Research Awards, which honor outstanding research projects completed during the preceding calendar year that have significantly expanded our knowledge or understanding of baseball, have been awarded to

The authors will receive their awards at the SABR 48 national convention, June 20-24, 2018, in Pittsburgh.

Leeke, a former news journalist and US Navy veteran, is also the author of Nine Innings for the King: The Day Wartime London Stopped for Baseball, July 4, 1918 and Ballplayers in the Great War: Newspaper Accounts of Major Leaguers in World War I Military Service.

Steinberg is a baseball historian and co-author with Lyle Spatz of 1921: The Yankees, the Giants, and the Battle for Baseball Supremacy in New York, which won SABR’s Seymour Medal in 2011. Steinberg is a two-time winner of the SABR Baseball Research Award, having been honored with co-author Spatz in 2016 for The Colonel and Hug: The Partnership That Transformed the New York Yankees

Young is an emeritus professor of religious studies at Westminster College in Fulton, Missouri, and the author of John Tortes “Chief” Meyers: A Baseball Biography and several books on world religions.