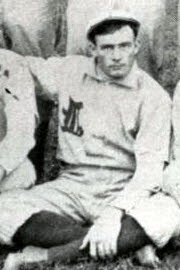 DECEMBER 10, 2020 — Baseball records are not chiseled in stone. Our knowledge changes over time as new information comes to light.

SABR has published a new research article by Gary Belleville to explain how a long-lost no-hitter by Cleveland’s Pete Dowling in 1901 has been recognized by the baseball research community as the first no-hitter in Indians franchise history — and the first one thrown in the American League’s inaugural season as a major league, too.

Dowling’s feat on June 30, 1901, against the Milwaukee Brewers has been obscured for more than a century because of an official scoring decision that was made too late to prevent an erroneous wire-service report from being sent out across the country.

Recently, after an extensive review of newspaper accounts and evidence collected from many sources, Retrosheet.org and Baseball-Reference.com added box scores from the 1901 season to their online databases, confirming Dowling’s performance to be a 9-inning no-hitter in the Cleveland Blues’ 7-0 win at Milwaukee.

Previously, James “Nixey” Callahan of the Chicago White Sox was thought to have thrown the first AL no-hitter in 1902 and Bob Rhoads the first in Cleveland franchise history in 1908.