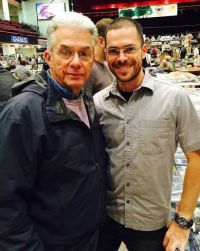 TCMA founder Michael Aronstein was selected as the winner of the inaugural Jefferson Burdick Award, which honors individuals who have made significant contributions to the baseball card hobby, by SABR’s Baseball Cards Research Committee. He will be honored at the SABR 50 convention this summer in Baltimore.

Aronstein founded the influential TCMA baseball card comapny with Tom Collier in 1972 and was one of the pioneers of the modern baseball card industry, arranging and hosting early conventions and co-organizing the biannual American Sports Card Collectors Association shows in New York City. He was also the publisher of Collectors Quarterly magazine and one of the hobby’s first full-time dealers, providing collectors with alternatives to mainstream sets along with collecting supplies such as plastic sheets before they were widely available anywhere else. TCMA produced hundreds of historical and minor-league team sets and challenged the Topps monopoly as a distributor in the 1970s and ’80s. He was also the founder of Photo File, which supplied card dealers with high quality 8×10 photos to be signed by athletes.

“TCMA cards were a touchstone for many, if not all, of us as the only cards we could find/afford of baseball legends,” said SABR Baseball Cards Committee co-chair Nick Vossbrink. “In a way that no book can touch, TCMA cards taught kids about baseball: who the legends were and why, and what they looked like. If Topps is the card of record representing which players were relevant for the current season, TCMA were the cards of history and how we learned about baseball itself.”

The finalists for the 2020 Burdick Award are:

Click here to learn more about each of the finalists at the SABR Baseball Cards Blog.