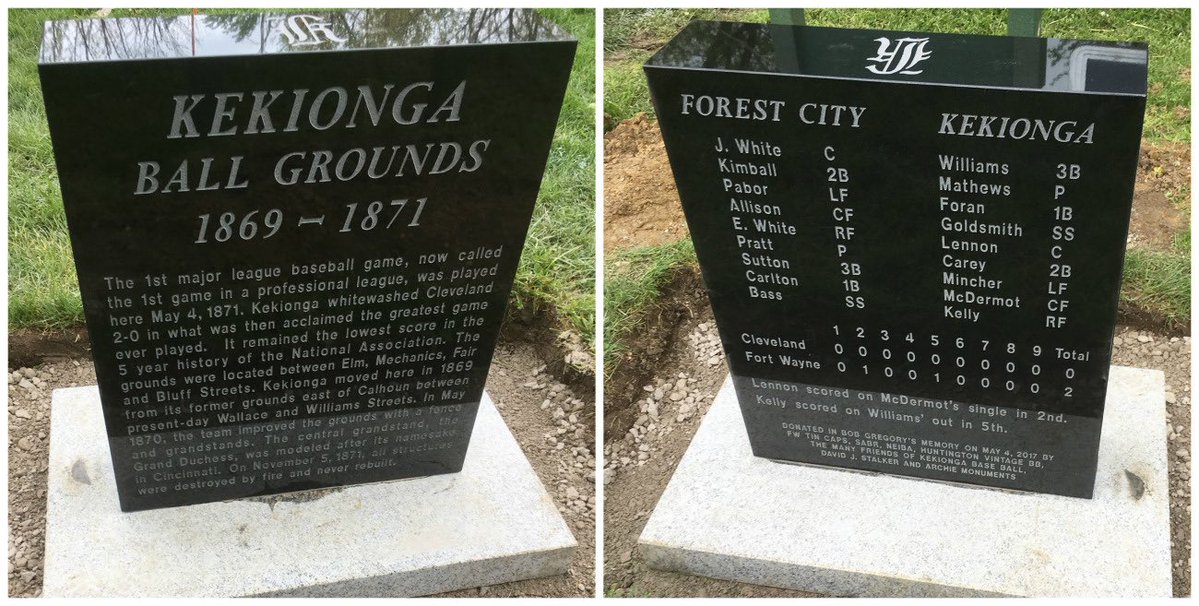 From Blake Sebring of the Fort Wayne News-Sentinel on May 2, 2017, with mention of SABR members Bill Griggs and Steve Krah:

On May 4, 1871, the first professional baseball league game was played in Fort Wayne between the Kekiongas and the Cleveland Forest Citys. There was a game scheduled for earlier in the day featuring Washington at Cincinnati but it was rained out, which meant the game in Fort Wayne was the league’s first official contest. The Kekiongas won 2-0.

Those are the accepted facts, but for decades the disputes have been over the location of the game, with five spots under consideration. Finally, in 1971, after research from local baseball historian Bob Parker, Mayor Harold Zeis held a press conference announcing the official site had been found near Camp Allen Park, two blocks south of Main Street just west of St. Joseph’s Hospital and near St. Mary’s River.

Zeis promised a permanent marker but it never happened. On Thursday, May 4, a monument was placed on the site to commemorate the game’s 146th anniversary. After Northeast Indiana Baseball Association member Don Graham sent him clippings of the 1971 press conference, local sports historian and current Kekionga SABR chapter president Bill Griggs started a campaign in September. That was also the month his friend local SABR chapter founder Bob Gregory passed away, giving Griggs more motivation.

With help from the Paddock and donations from the TinCaps, SABR members, the NEIBA, the Huntington Hilltoppers Vintage Baseball Team and other individuals, along with selling Gregory’s collection of baseball books, more than $1,500 was raised for the monument, which was designed by Archie Monuments of Elkhart, suggested by SABR member Steve Krah.