From SABR member Aaron Stilley at Royal Heritage on October 18, 2011:

I have posted charts plotting Royals seasons by team ERA+ and OPS+ in the past, charts that were inspired by posts on Bay City Ball and The Hardball Times. The Hardball Times piece by Paapfly was especially interesting to me. It seemed to show that pitching was an absolute must to win a championship, but many sub-par offensive teams have managed to win it all. This seemed to prove the adage that pitching is indeed what wins championships.

Of course, nothing gets closer to the heart of offense and defense than runs. As far as I know, no one took the suggestion and plotted the World Series winners by runs scored and allowed. I have done that below, comparing each championship team’s RS/G and RA/G to their respective league’s seasonal average. There is no park adjustment, something that would probably improve the accuracy a bit, but the raw numbers were good enough for me. It does tell a different story than OPS+ and ERA+: 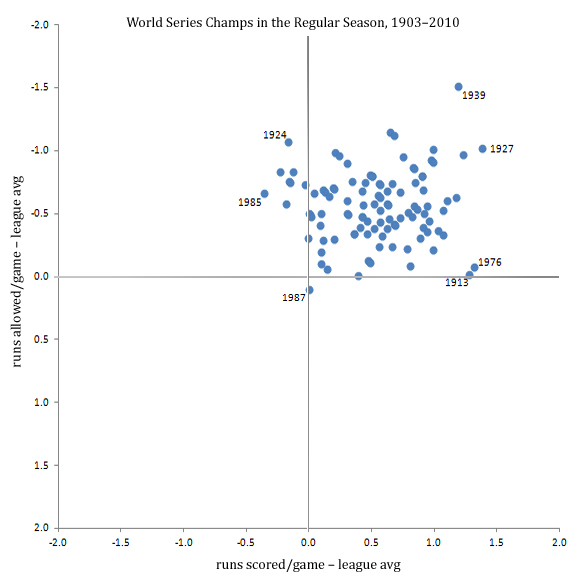 This restores a little sanity on the offensive side, shoving the vast majority of winners into the upper right quadrant of above average in run scoring and prevention. It does uphold the importance of run prevention, given that the 1987 Twins are the only champs to allow more runs per game than the league average. (The 2011 Cardinals will try to be the second.) Those Twins are even more freakish since they were only an average offensive team. There are seven teams that won it all with a below average regular season offense (1916 Red Sox, 1924 Senators, 1965 Dodgers, 1969 Mets, 1985 Royals, 1995 Braves, and 2005 White Sox). All seven of those teams had superb run prevention.