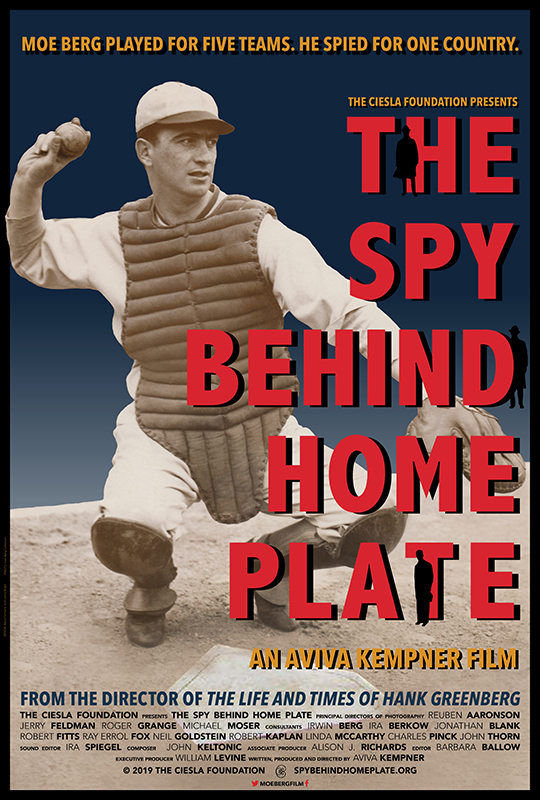 We are pleased to host a special screening of the new documentary film, Moe Berg: The Spy Behind Home Plate, at SABR 49 in San Diego with filmmaker Aviva Kempner.

The film will be screened at 7:30 p.m. on Thursday, June 27, 2019, at the San Diego Central Library's Auditorium. The event will be open to all SABR convention attendees.

In this first ever feature-length documentary about the enigmatic Berg, Kempner focuses her camera on a little-known Jewish hero. From the streets of Newark to five major-league teams during baseball’s Golden Age to his secret life spying for the OSS during World War II, Berg’s improbable story is told with rare historical footage and revealing interviews with family and an All-Star roster from the worlds of history, sports and spy craft. To learn more about the film, visit spybehindhomeplate.org.

Kempner is a a SABR member and an award-winning documentarian whose films include Rosenwald, about Chicago philanthropist Julius Rosenwald’s partnership with Booker T. Washington in building 5,000 schools for African Americans in the Jim Crow South; Yoo-Ho Mrs. Goldberg, about Gertrude Berg, who created the first television sitcom; and the Emmy nominated and Peabody awarded The Life and Times of Hank Greenberg, about the Hall Famer slugger who faced anti-Semitism during the '30s. She also produced the Partisans of Vilna, about Jews fighting the Nazis.

Before the film screening, convention attendees can visit the library's Sullivan Family Baseball Research Center, home of the SABR Collection, housed on the 8th floor there. Members of the local SABR Ted Williams Chapter will be on hand to meet, greet, and guide visitors around the BRC and its featured highlights.

For more information on SABR 49, or to register, visit SABR.org/convention.