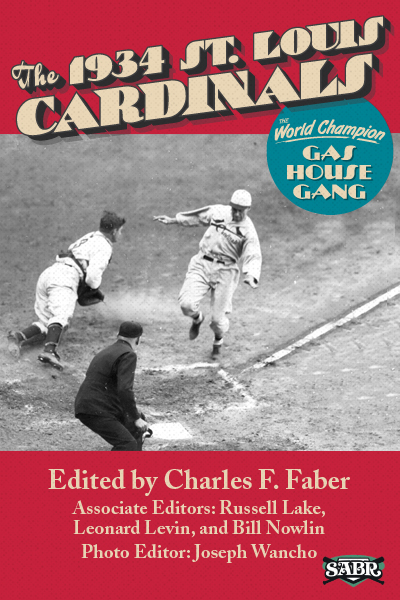 The 1934 St. Louis Cardinals were one of the most colorful crews ever to play the National Pastime. Sportswriters delighted in assigning nicknames to the players, based on their real or imagined qualities. What a cast of characters it was! None was more picturesque than Pepper Martin, the “Wild Horse of the Osage,” who ran the bases with reckless abandon, led his team­mates in off­ the­field hi­jinks, and organized a hillbilly band called the Mississippi Mudcats. He was quite a baseball player, the star of the 1931 World Series and a significant contributor to the 1934 championship.

The harmonica player for the Mudcats was the irrepressible Dizzy Dean. Full of braggadocio, Dean delivered on his boasts by winning 30 games in 1934, the last National League hurler to achieve that feat. Dizzy and his brother Paul accounted for all of the Cardinal victories in the 1934 World Series. Some writers tried to pin the moniker Daffy on Paul, but that name didn’t fit the younger and much quieter brother.

The club’s hitters were led by the New Jersey strong boy, Joe “Ducky” Medwick, who hated the nickname, preferring to be called “Muscles.” Presiding over this aggregation was the “Fordham Flash,” Frankie Frisch. Rounding out the club were worthies bearing such nicknames as Ripper, “Leo the Lip,” Spud, Kiddo, Pop, Dazzy, Ol’ Stubblebeard, Wild Bill, Buster, Chick, Red, and Tex. Some of these were aging stars, past their prime, and others were youngsters, on their way up. Together they comprised a championship ball club.

“The Gas House Gang was the greatest baseball club I ever saw. They thought they could beat any ballclub and they just about could too. When they got on that ballfield, they played baseball, and they played it to the hilt too. When they slid, they slid hard. There was no good fellowship between them and the opposition. They were just good, tough ballplayers.” — Cardinals infielder Burgess Whitehead on "When It Was A Game," HBO Sports, 1991