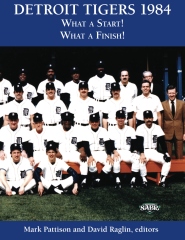 Detroit Tigers 1984: What A Start! What A Finish!
Edited by Mark Pattison and David Raglin

The 1984 Detroit Tigers roared out of the gate, winning their first nine games of the season and compiling an eye-popping 35-5 record after the campaign’s first 40 games — still the best start ever for any team in major league history. The Tigers led wire-to-wire in 1984, becoming only the third team in the modern era of the majors to have done so. Detroit’s determination and tenacity resulted in a sweep of the Kansas City Royals in the AL playoffs and a five-game triumph over the San Diego Padres in the World Series. Tigers fans will tell you that the bottom of the eighth inning in Game Five was the first time Kirk Gibson hit an iconic home run in the Fall Classic.

Detroit Tigers 1984: What a Start! What a Finish!, an effort by the Society for American Baseball Research’s BioProject Committee, brings together biographical profiles of every Tiger from that magical season, plus those of field management, top executives, the broadcasters — even venerable Tiger Stadium and the city itself. A team of more than 40 writers and editors compiled the biographies and supporting essays that make up the most comprehensive look at this remarkable team.

For 40 years, SABR and its members have led the way in publishing the best baseball historical and statistical research. Our publications program is shifting to take advantage of new methods of publishing. Not only will we continue to publish new books like CAN HE PLAY? A Look At Baseball Scouts and Their Profession (released in December 2011); OPENING FENWAY PARK IN STYLE: The 1912 World Champion Red Sox (released in May 2012) and Red Sox Baseball in the Days of Ike and Elvis: The Red Sox of the 1950s (released in September 2012), which showcase the best efforts of SABR’s members, chapters and committees, but new technology makes it possible for us to bring out-of-print titles like RUN, RABBIT, RUN: The Hilarious and Mostly True Tales of Rabbit Maranville (released in February 2012), GREAT HITTING PITCHERS (released in March 2012), and NINETEENTH CENTURY STARS (released in August 2012) back again. Books will be available in digital formats as well as paperbacks produced by “print on demand” (POD).