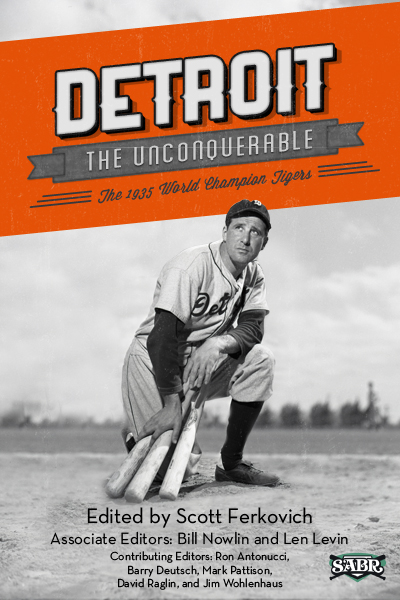 It had taken three and a half decades, but the Detroit Tigers were finally crowned the best team in baseball in 1935. Coming on the heels of their hugely disappointing loss in the World Series to the St. Louis Cardinals the year before, the Tigers emerged victorious in a thrilling six-game October showdown against a talented Chicago Cubs team.

It was Detroit's first World Series championship. For a city suffering from the Great Depression, it couldn't have come at a better time.

The team was led by player-manager Mickey Cochrane, and featured an offense fueled by Hank Greenberg, Charlie Gehringer, and Goose Goslin (dubbed the "G-Men"). On the mound were Lynwood Thomas "Schoolboy" Rowe, Tommy Bridges, Elden Auker, and General Crowder. With 93 victories that summer, the Tigers outpaced the New York Yankees by three games, taking their fifth American League title in club history.

To commemorate the 80th anniversary of this great team, the Society for American Baseball Research is proud to present the 1935 Detroit Tigers in all their glory. With contributions from over 35 members of the SABR BioProject, this book is a delightful account of one of the most significant teams in sports history.

"Navin Field was packed, and when we won Detroit really came alive. As a team we were like a bunch of brothers. Hank, Charlie, Billy, Goose, Schoolboy, Tommy...all of them. I think of those guys often. It was a wonderful time of my life." — Elden Auker

For 40 years, SABR and its members have led the way in publishing the best baseball historical and statistical research. Our publications program is shifting to take advantage of new methods of publishing. Not only will we continue to publish new books like CAN HE PLAY? A Look At Baseball Scouts and Their Profession (released in December 2011); OPENING FENWAY PARK IN STYLE: The 1912 World Champion Red Sox (May 2012); Detroit Tigers 1984: What A Start! What A Finish! (December 2012); Sweet '60: The 1960 Pittsburgh Pirates (April 2013); Inventing Baseball: The 100 Greatest Games of the 19th Century (July 2013), and Thar's Joy in Braveland: The 1957 Milwaukee Braves (May 2014), which showcase the best efforts of SABR's members, chapters and committees, but new technology makes it possible for us to bring out-of-print titles like RUN, RABBIT, RUN: The Hilarious and Mostly True Tales of Rabbit Maranville (February 2012), GREAT HITTING PITCHERS (March 2012), NINETEENTH CENTURY STARS (August 2012); Batting (January 2013), The Fenway Project (September 2013), and The National Pastime: Premiere Issue (December 2014) back again.