Add a classic baseball book from the SABR Digital Library to your collection: 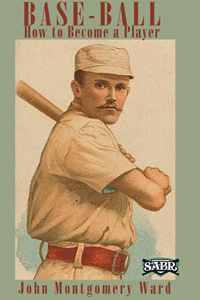 Hall of Famer John Montgomery Ward (1860-1925) tossed the second perfect game in major league history and later became the game's best shortstop and a great, inventive manager. He led the players into their own league in 1890 and came within a hair's breadth of changing the structure of baseball forever. Two years before that, however, in 1888, he published the book Base-Ball: How to Become a Player. The book is one of the game's early classics, and should be in every serious baseball library.

"The author ventures to present this book to the public because he believes there are many points in the game of base-ball which can be told only by a player," Ward wrote in his preface to the book. "He has given some space to a consideration of the origin and early history of the game, because they are subjects deserving of more attention than is generally accorded them. His principal aim, however, has been to produce a hand-book of the game, a picture of the plays seen by a player."

Illustrated with woodcuts, the book is divided into chapters for each position on the field as well as chapters on the origin of the game, theory and strategy, training, base-running, and batting.

SABR previously published this book under the title Ward's Baseball Book in 1993. This is the first SABR e-book edition.