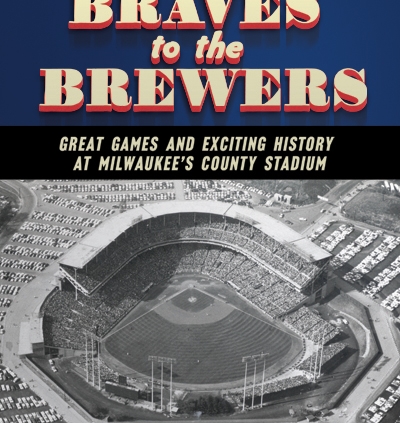 The newest publication from the SABR Digital Library focuses on memorable moments from the heart of the Badger State:

This book rekindles memories of Milwaukee’s County Stadium through detailed summaries of 72 games played there, and insightful feature essays about the history of the ballpark. The process to select games was agonizing, yet deliberate. The book could have easily been filled with memorable games by just Hank Aaron or Warren Spahn.

About half of the games are dedicated to the Braves; the other half to the Brewers. Some of the summaries chronicle games that were memorable and historic when they occurred, such as Jim Wilson tossing the first no-hitter in County Stadium in 1954, the 1955 All-Star Game, the World Series contests of 1957, 1958, and 1982, and Robin Yount collecting his 3,000th hit in 1992. Other summaries recall great performances long forgotten, such as Bob Buhl’s 14-inning complete-game victory in 1953 and the Brewers’ two grand slams in one inning in an 18-1 rout of the Boston Red Sox in 1980.

The games highlight the accomplishments and heroics of not just readily recognizable stars, like Aaron, Spahn, Eddie Mathews, Cecil Cooper, Paul Molitor, and Yount, but also revive memories of players like Gene Conley, Del Crandall, and Wade Blasingame of the Braves and Bob Coluccio, Dale Sveum, and Steve Woodard of the Brewers. Also included are great performances by the Braves’ and Brewers’ opponents, like Willie Mays’ four homers in 1961 and Nolan Ryan’s 300th victory in 1990. Twelve feature essays round out the volume and provide context for the stadium’s history. Topics include the stadium’s construction, the Braves’ move to and departure from Milwaukee, the Chicago White Sox’ home games at County Stadium, the Seattle Pilots’ relocation to Milwaukee, and the stadium’s demolition.

Members of the Society for American Baseball Research (SABR) researched and wrote all of the essays in this volume. These uncompensated volunteers are united by their shared interest in baseball history and resolute commitment to preserving its history. Without their unwavering dedication this volume would not have been possible.