SABR Digital Library: A Pennant for the Twin Cities: The 1965 Minnesota Twins 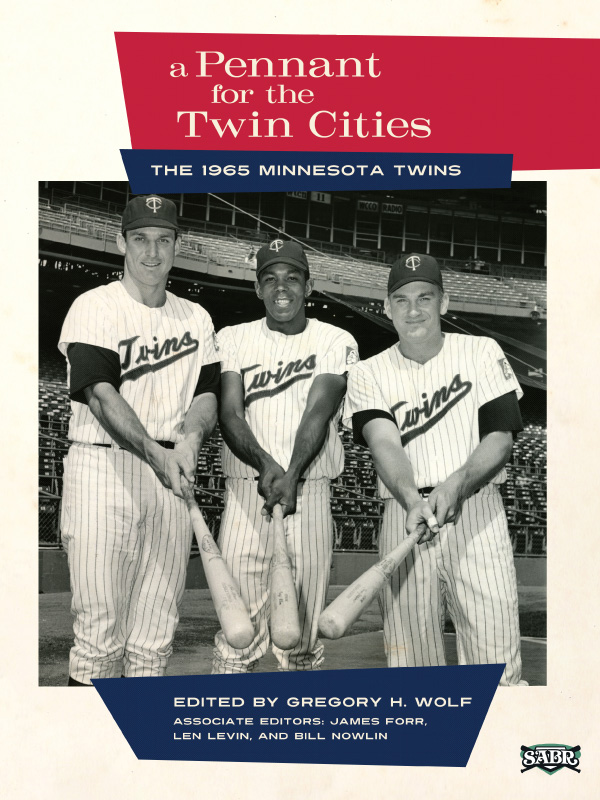 Add a pennant-winning book to your collection with the newest title from the SABR Digital Library:

This volume celebrates the 1965 Minnesota Twins, who captured the American League pennant in just their fifth season in the Twin Cities. Led by an All-Star cast, from Harmon Killebrew, Tony Oliva, Zoilo Versalles, and Mudcat Grant to Bob Allison, Jim Kaat, Earl Battey, and Jim Perry, the Twins won 102 games, but bowed to the Los Angeles Dodgers and a herculean performance by Sandy Koufax in Game Seven of the World Series.

Included are the life and baseball stories of all 35 roster players, the coaches, and manager of the 1965 Twins, plus team owner Calvin Griffith; broadcasters Herb Carneal, Halsey Hall, and Ray Scott; and sportswriters Dick Gordon and Max Nichols. A comprehensive summary of the regular season, as well as meticulous essays highlighting important games and the All-Star Game played in Minnesota, an overview of the 1965 Dodgers, and thorough summaries the World Series games are included. Chapters about how the Griffith family built its pennant winner, the fate of the Twins after 1965, Metropolitan Stadium, and the 1965 season “by the numbers” round out the book.